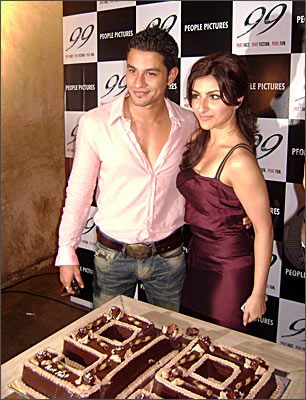 People Pictures launched their new film with an unusual name, 99, on September 1.

Starring an ensemble cast of Kunal Khemu, Soha Ali Khan, Boman Irani, Cyrus Broacha, Simone Singh, Mahesh Manjrekar and Vinod Khanna, the film will be directed by Raj Nidimoru and Krishna DK. It has been scripted by Sita Menon, a former rediff.com staffer.

After 99, People Pictures will move on to other projects like Click, Marry and the Sanjay Dutt-starrer Charles and I.

99 is the journey of two men, who want to break away from their monotonous life, and make it big.

Lets hope 99 hits a century at the box office!

In the picture: Kunal Khemu and Soha Ali Khan pose for the cameras.

Can't force a person to get vaccinated: Centre to SC