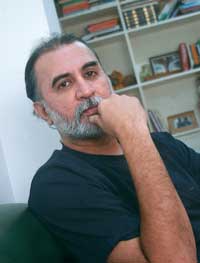 In college, Tarun Tejpal, the editor-in-chief of news magazine Tehelka, was an avid quizzer, participated in debates, played sports, and dated Geetan, now his wife.

In a candid interview with Careers360, he expresses his disappointment over India's conservative, intellectually challenged primary and higher education system, poorly constructed national education agenda, its fall-out on society and nation as well as on lack of honourable tag to vocational studies, among others.

What was school, college like?
I schooled all over the country; my father was in the army so we were transferred every two years. I studied at different kinds of missionary schools. I graduated from DAV College, Chandigarh.

At that point a transition period was on, so when you went to Chandigarh, you actually saved a year, following 10+ 1+ 3 system while Delhi and other cities had shifted to the 10+ 2 + 3 structure. To be honest, in my three years of graduation, I didn't attend a single class!

Weren't you worried about poor academic scores?
It's a great embarrassment but I got a first class in Economics (Honours). The week I took my graduation papers, my friend, who now works for the World Bank in Washington DC, and I wanted out. I remember having very long arguments with my father. But in his wise, persuasive way he asked me to carry on and I graduated, came to Delhi and started working.

Do you subscribe to the idea of parents imposing academic decisions on kids?
In my case, not even once in my entire school or college life did my father or mother nudge me in a direction I didn't want to go. I owe a great debt to my father for the education he provided around the dining table.

The conversations were about history, geography and world affairs. So even as a young school boy I had this kind of wide world opened to me by my father. To be told what you should do, I think that's bad news. I am extremely distressed by and suspicious of parents who try to push their children into spaces they don't want to go. That is a worrisome aspect.

A very high number of Indian students migrate to foreign destinations to pursue higher education. What is missing in our system?
Our academic system is not as wide or liberal as it should be. It's very rote and result-oriented. Much emphasis is laid on marks, degrees and divisions. Education must expand one's horizons. My elder daughter attended an American university on a fellowship and I saw how good it was for her. I visited the campus and realised how much more valuable education there was, as compared to India.

The students there had concerns, which were of serious cultural and intellectual values. These were kids interested in Afghanistan, in gender politics, in race politics. The main concern of elite children in India seems to be  which night club to go to and what's the new drug in use! I would like to see campuses here breed a culture of engagement of cultural and political issues of the day.

What changes should be brought about in the education system to enhance employability?
There are two things to education. One is to basically expand the mind to understand the issues of justice, issues of equality, 'non-casteism', 'non-classism' and so on. I call them life issues wherein the education provided opens up your mind, takes you away from bigotry and prejudice.

So we do need radical changes in our education system?
Change is totally due, especially in the area of primary education. It's a shame that after 60 years of existence of modern India, primary education is a total failure. I don't understand how anybody can call the country a superpower when we can't teach our children and clothe our children.

The spillover effect of the failure of primary education is that it leads to population explosion, raises environment issues and there are concerns of people management. Primary education is the first building block, and the absence of this will lead to greater issues.

Many colleges claim to be world-class institutions but the slate is not as clean. Do you think their false assertions should be investigated?
I think change will come if elite society, government policies and wealthy India has better orientation on education. In India, most educational institutions function like teaching shops. In slums people are trying to teach English to children and make money out of that.

The real struggle is to reduce the 'shop element' in all these teaching institutions and increase the educational element, but it has to be a societal initiative, which must start at the top, beginning with government policy. It has to start with the wealthy setting an example that we need educational centres and not teaching shops. The demand and supply situation is so skewed that the demand for the education is going relentlessly high and the supply is low. This is bound to lead to corruption of both spirit and intent.

To what extent should students believe in media rankings and advertisements by leading publications?
It's a catch-22 situation. It's possible that those universities that advertise could also be providing a good education; clearly all of them are fulfilling a need because they are thriving. I think the problem really has been in the construction of the national education agenda. It should have been constructed with far greater intelligence and insight to create great enclaves of higher education.

In America, institutions are funded by endowments. On the other hand, the rich in India fund shrines and temples, rather than invest in educational institutions or create something of genuine value to the young of the country.

'Indian kids need heroes they can relate to'