He trains India's poorest students for the IIT 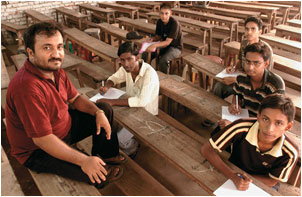 His father, a post office clerk in Bihar, couldn't afford private schooling for his children. So, Anand Kumar studied at a Hindi medium government school where, at an early age, he fell in love with mathematics. During graduation, he submitted papers on Numbers Theory that were published in UK's Mathematical Spectrum and The Mathematical Gazette.

He was accepted by Cambridge University and was close to realising his dream of becoming a mathematician, when his father suddenly passed away. The household income dwindled and Kumar and his mother made papad, which he sold door-to-door in the evenings, while writing mathematical theory in the daytime.

Then one day, a well-wisher suggested Kumar teach maths. In 1995, at the age of 22, he rented a classroom for Rs 500 a month and started teaching. In one year's time, the strength of his classroom went from two to 36. Today, his study centre Ramanujan School of Mathematics is renowned, the world over. In an interview with Sumita Vaid Dixit, he talks (in chaste Hindi) about Indian education, revolution and his dream.

Why did you start Super 30?
Within three years we had nearly 500 students. Although the fee was nominal -- Rs 1,500 a year -- some poor students could not pay. Once, a boy came to me and said that he wanted to study but could only pay after his father, a poor farmer, had harvested potatoes. In Bihar, we call it 'aloo ukharna'.

I didn't want to take away the boy's only hope of changing his life because he couldn't pay. That's when I decided that I will form a group of 30 bright students, all from poor families, provide them with board and lodging and prepare them for IIT. This group was called Super 30. My brother Pranav Kumar, a violinist by profession, manages the institute, while my mother cooks for the students.

What is it about your teaching methods that help students get through to IIT?
This success is a combination of three factors. My students have junoon (passion), a fire in them to achieve. Two, our teaching approach is different. I use multimedia slides to make a little story with characters to explain maths concepts. Three, we take tests every day. Well, in a nutshell, we teach our students the how and why! That's all.

But how do you run the place with the little fee you charge the other students?
I didn't start the place to make money. There are many coaching institutes in Patna for the rich, but none for the poor. NRIs (non-resident Indians) come to me with offers of help, but I wanted to prove that much can be achieved with fewer resources.

Have you been able to prove that?
I think I have. There are far too many students coming to us, more than what we can take. And this has annoyed many coaching institutes. As you would know, many of the institutes here are run by criminals. I have received death threats, one of my non-teaching staff was stabbed, once they even tried to blow me away with a crude bomb, but I escaped unhurt. I move around with two security guards armed with machines guns.

Does the sight of security guards scare away children or parents?
(Laughs) Children in Bihar are familiar with the criminal activities here. It doesn't scare them.

Don't you get scared your life may be at stake?
I am doing this for society. Yes, mobility is restricted and I get frustrated at times, but it's okay. I get my strength from these kids. But over the past few years, the crime rate has come down and the police support me. Besides, if I get scared how will the others join me in creating a revolution?

What kind of revolution?
Making education accessible to every poor child in India. I wish the kids I have taught come back to their hometowns and do something for their people, their village. At times, it hurts to see that some forget about giving back to the society.

But there's another kind of kranti (revolution) taking place. Earlier when a peon used to work at an IAS officer's residence, he hoped that when his own son became a peon, the officer would treat him well. Today, the peon who works at the IAS officer's house wants his son to become an IAS officer, not a peon. That's kranti! We mustn't forget the sacrifice and hardships parents go through just to make sure their children live better lives, their children go to schools.

Would the HRD minister's proposals bring about a change?
Kapil Sibalji thinks that by changing the syllabus or introducing a grading system, education will improve. The system will not change like this. Change will come when teachers have the passion to teach. Jab unme junoon hoga! For that teachers should be paid well. It's ironical that while parents want their children to have great teachers, they don't want their children to become teachers!

The policymakers' idea of education is limited to Delhi and the NCR region. They have no clue of the positions of schools in Bihar or Uttar Pradesh many schools don't have roofs here.

And suggesting 80 per cent as cut-off marks for the IIT entrance exam is ridiculous. You cannot apply this to local boards or to students in villages. There cannot to be true development until the villages of India are also a part of the development process. Bharat ki atman gaon mein bassi hain (the spirit of this nation resides in the villages).

Then what's the way forward?
We need two syllabi: one for students with an ordinary intellect and one for students with extraordinary intellect. There are those who can do very well in jobs and there are those who can excel in research, and the first six years of schooling are good enough to evaluate a student's potential. This method is followed by China and Russia.

Do you know that China has topped 15 times in the past 22 years in the International Mathematical Olympiad? In times to come the top researches and scientists will come from China.

So we have to think of novel ways of encouraging our students to get into research. Why hasn't India produced Nobel winners in a long time? The ones that have are those who left this country to pursue their research elsewhere.

And, what are your future plans?
I want to extent my programme to students of Class 5 and 6 as many gifted children fade away before they reach class 10. Many out of school to sell vegetables or work at tea stalls. I want to catch them young.

So, now I'm thinking of setting up a chain of free schools across the country, with free board and lodging facilities, where children can study from Class 5 to up to Class 12 and where they are prepared not just for IIT but Olympiad tests in mathematics, physics and chemistry.

But your dream of going to Cambridge still remains unfulfilled?
When those eyes full of hope look at me, the respect and pleasure I get seeing my students being placed in large organisations makes me forget about it. But I do keep travelling to the US to give lectures my papers get published in international magazines. I am happy.

From office boy to award-winning copywriter

Dreaming in the lantern light