What's it like shopping for sex toys in India?

Designer boutiques, customised creations and passionate patrons -- the sex-toy industry is thriving the world over. The first name that comes to mind is Amsterdam, in the Netherlands, a city famous for sex tourism. While sex toys are easily available, the Red Light District is particularly famous. This is not a sleazy market but a sexual amusement park of sorts, known for parties, people-watching and limitless sex toys. A close second is Las Vegas, an American city known for the crazy sex-themed parties organised by adult toy stores. The place to visit is Sincity -- an adult fairyland with over 40 million visitors a year. Check into their hotel, use their limousine services and go shopping for some of the most exotic sex toys ever. The entire process is luxurious and tempting, and begs you to indulge. The next stop is Pattaya in Thailand, where the night bazaars by the beach are your best bet for your toy hunt. But it's UK that has revolutionised the concept of sex toys, with ultra-high-end stores taking seat in the country's most up-scale markets. 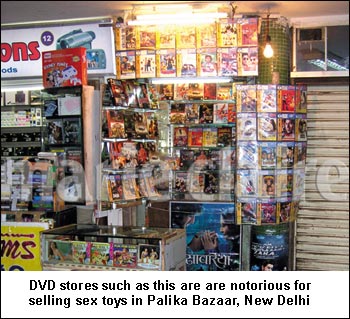 In the land of the Kamasutra, with temples like those in Khajuraho, and a billion-strong population (which is growing by the minute), it is illegal to buy sex toys. That's a paradox if there ever was one. Our lawmakers have ensured that getting inventive in bed is a pleasure that comes with a penalty -- two to five years of jail. But as is often seen in India, we learn to meander our ways around legislations we don't like, a fact substantiated by our currently thriving Rs 500-crore sex-toy industry. So if it's not the law, what is it that stops women from walking into fairly popular underground markets to pick up their weapon of choice? That's the question we have in mind as we set out on this adventure -- an entire day scouring the seedy and snazzy markets of New Delhi on a hunt for sex toys. As the day comes to an end, we find ourselves with a bag full of, well, seriously questionable products, and the experience of a lifetime!

A recent survey by Durex claims that 13 percent of urban Indian women use sex toys, with 55 percent open to experimentation. On that positive note, we begin our hunt -- if so many women can get access to these illicit items, why can't we? A few calls to some suitably-enlightened folks gives us a starting point. Three markets in New Delhi are notorious for selling sex toys -- Palika Bazaar, Sarojini Nagar and Ghaffar Market. We map out Sarojini, pretending to be out shopping for a bachelorette party. Here we find stores where we have to push our way through mounds of clothing, reach the inner confines, and sweet-talk the shop owner into showing us the 'real' stuff. Fur-lined handcuffs, leopard-print hunters and edible underwear -- the market is all about the peripheral items, we discover, disappointedly. But we want to buy lean, mean sex machines. And so we head for Palika, an underground air-conditioned market in the heart of the city, known for selling pirated or fake versions of just about everything. Owing to the rising demand of sex toys in the capital -- shop attendants claim to sell 10-15 sex dolls and over a dozen vibrators every month -- these are available in almost all stores. But we choose a soft target, an illegal DVD shop, as it seems easy to take the conversation from the 'foreign' films on display to sex toys.

As the attendant busies himself showing us the latest 'masala maal' (spicy stuff) in DVDs, we gently broach the subject of sex toys. "Ummm... would you also have some adult toys?" we ask. He stops, turns around and gapes for about 10 seconds, a smirk slowly spreading across his face. And as easily as that, we are in business.

While he sifts through his goods to show us the new stuff, we try to get him talking. Feigning embarrassment, we ask, "Do you get lots of customers for these things?" "Arre madam, sahab log bahut aate hai (Madam, lots of men come)," he replies in a revealing, know-it-all tone. "And women?" "They too come, but less." His answer surprises us, as sex toys are as popular among women, as men in India. In fact, as we are told later by Dr Saroj Gumaste, a Mumbai-based sexologist, "Women using sex toys goes back many centuries. Only earlier, they used carrots and now they have specially-designed vibrators. And it's not just married women, single ones also buy these toys." The conversation that follows, however, gives us insight into why women avoid coming to such markets in a hunt for sex toys.

He starts with a bag full of vibrators, and then begins a memorable monologue. "Madam, superb quality. Naya maal hai with chemical coating...for extra excite. Ladies log ke liye superb. But this is manual, no vibration... should I show you how to use?" Wham! we want to punch 'the excite' out of this guy! But we settle for a change in subject.

What's a better way of distracting a man talking dirty than bringing up money? And so, we begin bargaining. "Rs 4,000, madam. It's imported." There are two things we learn during this conversation. One, when they say imported, they mean China. Even though the packaging says it's been made in Europe, all instructions are written in Chinese, something that finds support in the numerous Internet researches that claim 70 percent of all sex toys the world over are manufactured in China. And two, in Palika, the maximum you pay is one fourth of the quoted price. We do well, and manage to buy the 'superb-quality' vibrator for just Rs 750.

Here's what else Palika Bazaar has to offer in the name of sex toys: A flashlight-sized shiny yellow vibrator (Rs 700)... its size is downright scary! Just like the cactus-like purple condom (Rs 750), ouch! There are also breast-enhancing products (Rs 200-300), claiming to be 'stimulants' for women, but packaged to entice men. Then there's the Dooz 14000 massage oil (Rs 700) for both men and women, and sexy gum, which as the name suggests will make you feel sexy. Hmm... just chew over it. In the process of purchasing, we are subjected to what can only be referred to as verbal molestation. We are told we can even get a life-size sex doll for just Rs 13,000 if we are willing to wait for an hour.

We buy a few toys from here and head back to work with our loot. We alternate between giggling and fuming over the day's experience. Palika had been a nightmare, Noida a dream. The more initiated may have contacts of people who deliver toys at home or know of these hidden corners in fancy stores. But for the novice, getting your hands on some sex toys is definitely no child's play!