News
Business
Movies
Sports
Cricket
Get Ahead
Money Tips
Shopping
Sign in  |  Create a Rediffmail account
Rediff.com  » Getahead » How to e-file your tax returns at the last minute

How to e-file your tax returns at the last minute

Ramprasad, a software programmer in Bengaluru, finally collated all his documents for tax filing. He was never the last minute person, but adhering to his close friend's words that they would e-file this time round, he initiated the filing only on July 27. Although he was a little skeptical about not following the traditional method of physical filing which he did way before time, adhered to his friends quote, 'Arrey yaar, it is for people who are busy and want to file their returns in the end!'

Well, now the D-Day had arrived and he could not delay any further, he called up his friend who could run him through the process. He was surprised, when his friend said, 'Oh! I will do my tax filing later (after 31st July), don't have time da. I don't exactly know the process but you can try googling, that should help'.

Ramprasad was perplexed and frustrated. He was not left with much option than to hit the net to save him. He did not want to file after July 31 for he knew that he was going to have a tax payable and there would be additional penal interest if he failed to file his tax returns prior to due date.

Ramprasad, did not have a digital signature, so he was to now get the ITR-V form filed with the department. It was like going to Delhi from Bangalore via Kanyakumari! Darn! If only he had followed the method tried and tested by him over the years, he would not have to stress out in the last minute.

He started the process. Registered on http://incometaxindiaefiling.gov.in, in fact there was a helpline available as well, he knew whom to approach if he got stuck in between. In fact, he even found a neat algorithm which made life so much easier: 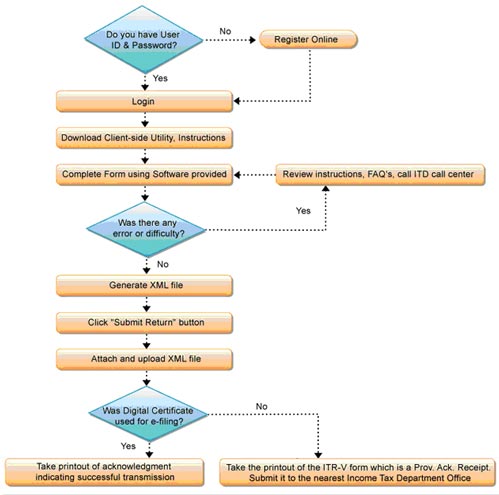 This was definitely his cuppa tea. He quickly checked the heads of income under which he would be assessed:

ITR2 was applicable for his case is what he figured out after this effort.

He had to download a 'Return Preparation Software' for the selected form and then it was only entry of data -- he could do that offline too. After painstakingly entering all the details and cross-checking them a zillion times Ramprasad finally generated an XML (extensible mark up language, a format in which the IT department captures the required information directly into its database) file, he had a tax payable, no worries there either he could do it (no prizes for guessing!) online, https://onlineservices.tin.nsdl.com/etaxnew/tdsnontds.jsp.

For taxes being paid post the FY, one has to choose the self-assessment tax and use Challan 280.

Ramprasad quickly filled up the challan and logged into the net-banking site with the user id/ password provided by the bank for net-banking purpose and entered payment details at the bank site. He successfully paid his taxes and generated the challan counterfoil with CIN, payment details and bank name through which e-payment has been made. He updated the ITR with the self-assessment tax and then what else, now he just had to click 'Submit return' and subsequently upload the XML file.

On successfully uploading, the ITR-V popped up which is essentially a combination of acknowledgement of e-return and verification. Now all he had to do is print and get it stamped, Wow! That was definitely no rocket science, now he could boast amongst his colleagues that he had done his tax filing in just about 45 minutes. Well, he had to get it stamped and that would not take long.

Online filing is definitely a good option to beat the last minute rush!

Anil Rego is the founder and CEO of Right Horizons , an investment advisory and wealth management firm that focuses on providing financial solutions that are specific to customer needs.

Do you have adequate health insurance?