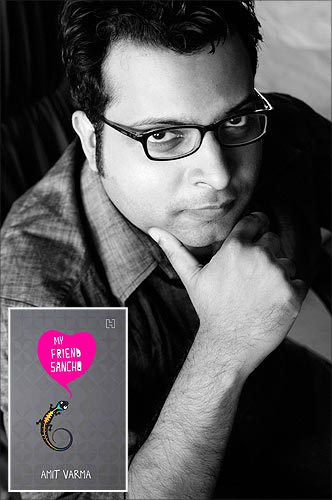 As a journalist, he's written for prestigious publications such as The Wall Street Journal and The Guardian. In 2003, he served as website Cricinfo's managing editor in India; and in 2007, he wrote a weekly column for Mint, called 'Thinking It Through', which won him the Bastiat Prize for Journalism.

He's also a noted blogger. In December 2004, he started India Uncut, which quickly became one of India's most popular blogs. On India Uncut, his pithy, witty commentary on major and minor issues of the day has made him an authoritative voice in Indian cyber-space, and has won him several nominations and awards.

But, according to Varma, his true desire has always been to be a novelist. "There's never been anything else I wanted to be," he says. So, in 2008, he took time off from writing columns and doing freelance journalism so that he could devote his 'mental bandwith' to writing novels.

The result? My Friend Sancho, his debut novel, which was published in India in May 2009.

The novel tells the story of 23-year-old Mumbai-based reporter Abir Ganguly. While working the crime beat one evening, Abir believes he's covering yet another routine story in routine fashion. However, what transpires is far from ordinary. It turns his entire world -- both professional and personal -- on its head!

In this e-mail interview with rediff.com, Varma discusses the many different facets of his career, and also answers questions about My Friend Sancho and his plans for the future. (Hint: More novels!)

Did you ever imagine yourself doing anything but writing? If so, what was it?

Were you a voracious reader as a youngster? What sort of books did you read?

My dad had thousands of books at home, and in that environment, I naturally became a voracious reader. I started reading serious literature pretty early, and my favourite writer at age 10 was Dostoevsky. I also read all of Shakespeare at that age, though one of his plays that I loved most was Titus Andronicus, so my taste at the age is questionable. I lightened up as the years went by, and read more crime fiction than anything else these days.

How did you get into journalism?

I got into journalism accidentally. I used to freelance for a few magazines in the late '90s, when I was in television.

In 2001, I got a chance to work with Wisden (Cricketers' Almanack). I rose to be their managing editor in India, a position I held when we bought Cricinfo in 2003. I moved to a consulting position at the end of 2004, and then left even that at the end of 2006 when I decided I needed to quit my job and focus on writing a book.

But I got sidetracked into writing columns and op-eds. Through 2007, I wrote a weekly column for (business daily) Mint, and freelanced occasionally for the Wall Street Journal, etc. Then I quit all journalism in 2008 and finally got down to writing a novel.

As a career, what are some of the clear positives about journalism? Negatives?

Positives: It helps you write crisp copy to deadline.

Negatives: Journalism in India tends to be superficial, and writers hardly get any time to work on their stories. As a result, you're always skimming the surface of things, and never have the scope to go too deep. Literature gives you that scope.

When were you first online? When did you first begin to write your blog? Did you take to the new medium like a fish to water?

Being managing editor of Cricinfo, I knew the medium pretty well before I started blogging.

Were you offered a book deal because of your blog? Were you contacting publishing houses or were they contacting you?

The book deal had nothing to do with my blog. I had offers from four publishers, and two of them didn't even know I had a blog. The book made its way into the world on its own merits, and that's how I'd like readers to evaluate it.

Have you written fiction before? If so, anything romantic? Poems, short stories, half-finished novels? How did this particular story come to you?

As I said, I've wanted to be a fiction writer all my life. But this was my first proper attempt at a novel -- I guess I wasn't ready to write one before this, either in terms of craft or maturity. Writing fiction -- especially novel-length fiction -- is completely different from writing a blog.

How have dedicated fans of your blog received the book?

All the feedback I've received indicates that they liked it. And I've received an equal amount of positive feedback from readers who have never read India Uncut as well. I guess that means that the book is striking a chord on its own merits. It's already a bestseller by India standards, by the way, and we've hit the 15,000 copies mark.

The My Friend Sancho book cover contest, how did it come about?

I wanted to look beyond the usual pool of book designers in India, so I thought we'll do a contest for the cover. As I'd hoped, we got many awesome designs from designers who had never designed a book cover before, and chose the one you see in the stores. My publishers were overjoyed at the response, and are still in touch with some of the designers they discovered through this contest.

The book is quite humorous. But, on the other hand, the subject matter is quite serious. Did you find this a difficult dynamic to balance? Did you consciously introduce some of the irreverence and randomness of your blogs? Do you think some of us subconsciously treat matters of great gravity in a similarly sarcastic way?

Was it difficult to create and give colour to the female lead, Muneeza, being a male and from a different religious and socio-economic background?

The book is told from Abir's perspective, and all we see of Muneeza is what he sees of her. So it wasn't difficult at all. In any case, Bombay is a great melting pot, and I've known plenty of people from Muneeza's background.

The book being told in first person, it's tempting to detect autobiographical bits in the character of Abir Ganguly. How much of that crept in, the journalism aspect and also living in Mumbai? Have you ever worked the crime beat, or written a story similar to the one Abir works on in the book?

The book is not autobiographical at all. I've never worked the crime beat, or done time in a newsroom. One piece of good advice young writers are often given is to write about what they know, and as I know Mumbai, having lived here for 14 years, I've set the story in Mumbai.

That said, the character of Abir Ganguly has no more in common with me than with any Mumbai journo -- though his sense of humour is a lot like mine on India Uncut.

Is a relationship like this -- Abir and Muneeza -- possible or plausible, without being ostracised by both families?

I've seen relationships like this work out. In fact, they're not unusual at all in Mumbai. Anything is possible when two young people are in love.

What does the future hold in store for you? How long do you intend to keep blogging? Do you hope to write another novel soon?

I'm at work on my second novel. Then I'll do my third. And then my fourth. My blogging doesn't take up too much time, so I'll continue doing it, but I don't intend to ever be a journalist again.

Buy the book on Rediff Shopping