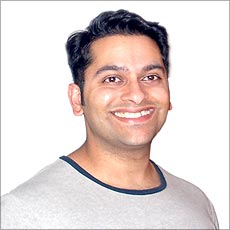 He is ultra-brown, and proud of it, says P Rajendran of premier blogger Manish Vij.

The Indian blog circuit is a many-splendoured thing. There is the hip and rather deliberately adolescent, the consciously intellectual, the technical, the bow to high art, blogs focussed on Indian politics or social realities and much more besides, beyond and even between these tropes.

But there are just a few bloggers who stand out for their natural ease with language and their ability to paint ideas in relief, in fresh, vibrant colour. One of these is Manish Vij. Consider just this quote:

'Looking for substance in Slumdog Millionaire is like pulling the tines of a fork through a custard-apple mousse. There's little there in this frothy, sensory concoction.' Even if you disagree with his views, you have no doubt what he means.

Vij, who currently hosts Ultrabrown.com but is also associated with desi blog Sepia Mutiny, tends to focus on Indian American pop culture, but is not limited to or by it.

He is a software entrepreneur who has worked on code that helps communication. He started his IT career with Microsoft Word, set up one start-up (NetStudio) to make Web graphics easy, and now runs Anconia, whose products include a high-end blog editor and a mass e-mailer.

But while he makes little money off it ("It covers the cost of coffee"), blogging is what defines Vij best. He may not even have got into blogging, though, had it not been for friend and fellow blogger Razib Khan.

"When he linked to my personal site (vij.com), I felt obligated to start writing," Vij says. That was in 2003. He was always into writing, but something eventful in the summer of 2004, the details of which Vij can't remember now, drew him and three other bloggers to Abhi Tripathi. They set up Sepia Mutiny, a South Asian blog with multiple contributors intended to be an action alert on the politics of discrimination.

"We knew we'll be a bigger megaphone if we united," says Vij. Sepia's strength was American politics. Because Tripathi was averse to Bollywood, Vij decided to set up a more cultural blog, Ultrabrown.

"I wanted something that focused on diaspora, on arts, and was friendly to Bollywood," says Vij. That was in 2007.

Vij was born in Ghaziabad and was four-and-a-half years old when his father Jagdish and mother Neelam finally decided they would leave India. "My father put off a chance to come to the US because he was afraid to corrupt his kids," says Vij, laughing as he speaks of the Hindi and Hinduism classes that he and his brothers detested.

But his early years in India had left their mark. "For my brothers, it's that much more difficult: they don't have four years of basic Hindi, they don't enjoy the music and the movies very well, they are cut off from this huge second source of pop culture. There's this benefit (of being connected) -- maybe not when you're growing up, but certainly when you are older."

For one, Vij says, on any weekend, it instantly doubles your movie choices. He could wallow in the more emotional Hindi films and enjoy the special effects of the English ones.

"Interesting things happening at the intersection of these cultures: some work out, some don't," he says, citing the example of Indian musicians who, influenced by their culture, come up with better crossover music than if they just worked on R&B or pop. Vij really found his Indian side when he went to the University of California at Berkeley. There, he says, it was cool not to be mainstream American.

"All of a sudden they ask you questions you should know the answers to. You grow up and find out that Indian women are very beautiful or Indian guys are good-looking, or whatever," he says. "Berkeley was the first time I was exposed to Indians who were complete packages. Singing, tabla... And they were cool. And they were popular with the opposite sex. And they were American. For the first time, there was no trade-off between being Indian and being American."

There were 800 people of Indian origin there, he says. He cites the example of Abhay Dandekar, then the head of the undergraduate Indian student association, and now a doctor. "He was a well-liked fellow, who treated everybody with kindness -- a genuinely nice person." Dandekar was a classical Hindustani vocalist, played the tabla, and was also popular with the girls.

"I really looked up to people like that. At high school, you knew only kids who were geeky and/or bad Indians (not serious about their studies, partying too much). There were not too many well-rounded kids, not in high school," Vij says.

The South Asian studies department at UC Berkeley was a product of the attempt the US made during the Cold War to understand Soviet-aligned enemies. But as the number of Indians increased in the 1990s, Vij says, they were "forced to teach culture to kids who knew the subject." There was a lot of tension, particularly over the Freudian re-interpretation of Krishna's details. But the students still appreciated that they could learn their mother tongue.

Even after he joined Microsoft, Vij says he used to "convert" more people who graduated from colleges that did not have many Indians, driving them up to Vancouver, Canada, to introduce them to Bhangra in a little Punjabi part of town there.

In 2006, he decided to even get closer to India. He wanted to write a book on hipsters in Bandra and Brooklyn. Since he had lived in Brooklyn but not in Bandra, he set about correcting the deficiency. "I would still be there (in India) if my Internet worked," says Vij. But when in one year seven ISPs could not supply him with a reliable Internet connection in the digital no-man's world of Bandra, he knew he had to return.

Even while in India, Vij continued his work in the US. "It was funny, Most people were outsourcing their work from the US to India. I was doing the reverse... I had an Indian fellow in NY doing my tech support. I was outsourcing to the US," he says.

Even though Vij looks to address the arts in his blogs, he is also driven by social issues, among them the cultural insensitivity that underlies relations South Asians have with the mainstream community.

He remembers the time, in 2004, when then Senator George Allen called Democrat volunteer S R Sidharth a 'macaca', a monkey. Or when a statue of Ganesh was mass produced with a garland of genitalia around its neck. Or when 7-11 got South Asians to dress up as Appu from The Simpsons and talk with a pronounced accent. "In the first generation, the common reaction is keep your head down, make money," says Vij. "They don't feel they have a stake in the political system, they don't understand it. Why bother? This isn't my fight."

He described a more complex rationalisation: "'Of course, Americans are racist; (but) Indians are racist, too.' Or, 'That community is treated badly in India, so why is it a surprise?' These are some of the arguments that I hear. There isn't a sense of ownership," says Vij.

Vij got more passionately involved in the 7-11 Appu controversy in 2007 when he spoke to the media about it and got a little attention.

"It was really astonishing that people could be so tone deaf. I went on a lot of the mainstream media... and pretty much nobody took it seriously. I was essentially the fringe... Every single ethnic group has to fight that battle by themselves. Just because people now understand that you cannot be racist toward black people, you cannot be racist to Jews, doesn't mean that it extends to anybody else."

"Every ethnic group has to fight that exact same battle over and over. The battle's never really won until there's numbers, population-wise. Otherwise they're just dismissed as cranks."

Vij believes a blogger has to write what he or she is passionate about ("It's difficult to fake enthusiasm.") He suggests writing a blog on the quiet for over a month or two in a trial phase to find one's rhythm and suitability for the job. Also, he says, "People who write good comments are not necessarily good bloggers -- which is bizarre."

He advises people to put their lead up, ensuring impact through a short amount of text. And more than sticking by the rules of writing, he says, "be pungent, be memorable."

Here, of course, Vij could be describing himself.