Neither lend money to, nor borrow, from friends 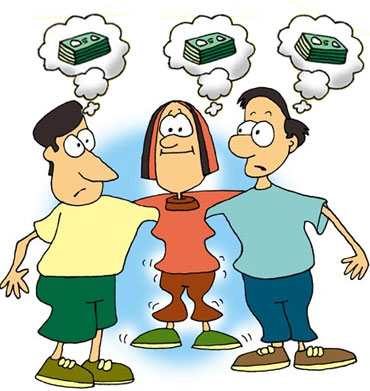 A boy who lost one of his childhood friends to the evil of lending money and almost lost another as a borrower recounts his experiences and why he will neither lend or borrow money on a day after the Friendship Day.

Neither a borrower nor a lender be; for loan oft loses both itself and friend William Shakespeare

This is the advice that Polonius offers his son Laertes in Shakespeare's Hamlet. The son is about to leave home to study at a distant university and Polonius like any dear father who wants to protect his son from the dangers of lending and borrowing, amongst other things, asks him to be wary of borrowing or lending money to a friend (entire text at the end of this piece).

I first read this poem from Hamlet -- titled To Thine Own Self Be True -- in Class X. From that day in 1987, more or less, I have stuck to Polonius' advice.

There were times, though, when there was no other option but to borrow money from friends. But that was quickly repaid. Thankfully, I was able to keep my friendship as a borrower; however, I turned out to be a silly, selfish lender.

There were reasons for me to do what I did, and I am sure it would ring a bell or two for you too, when you go down memory lane, and remember how lending and borrowing money between friends creates a rift in friendships.

For one, once you borrow money from a friend you feel obliged, under pressure to agree with whatever your friend says or does.

At times, you may oppose her/ his act, but in muffled tones. The sharpness of truth gets blunted under the pressure of debt.

I am not suggesting that your friend would expect obligation and obedience from you because of the money s/he lent to you but you would always feel indebted.

Every time you go out with your friend in a group you would feel you were being run down by your friend from whom you borrowed money. For instance, during a conversation if you say something and your friend begs to differ with you, you'd feel that your friend is trying to impose his ideas on you.

At times, you may be right, but more often than not, the thought that you borrowed money from her/him lingers on.

Gradually, it makes you feel miserable, inferior when you socialise with her/him in a group. You feel like making your point but stay silent, thinking your friend might feel offended. As time passes by you may not feel like going out with this friend, avoid meeting her/him, don't answer her/his phone calls.

This could continue till the time you repay what you had borrowed and get your voice and conscience back.

But, by then, your friend would have been stopped being your friend. When money comes in, friendship goes out.

The same scenario occurs when you lend money to your friend. But, as a lender, the shoe is in the other foot, and you feel wronged all the time by your friend.

For instance, when your friend, who has borrowed money from you, spends some amount on himself, the lender in you feels that your friend is being irresponsible.

"How can s/he spend money when the first thing s/he should have done is repay my money," the lender in you screams.

Everything else overrides this concern of a lender. Even your friendship that has been so dear to you for all the years you have been together before you lent money to your friend.

Though I have not lost the friend from whom I had borrowed money I lost one to whom I lent. Earlier, we would laugh our hearts out over frivolous stuff even; today we avoid looking into each other's eyes.

Neither a borrower nor a lender be; for loan oft loses both itself and friend how true!

Have you lost a good friend because of your mistake and want to break the ice?

Tell us your story and reach out to your estranged friend through Rediff.com!

Simply write in to us at getahead@rediff.co.in with the subject 'I want my friend back!' and we'll publish the best stories right here on rediff.com! Who knows you might just get a call from an old friend you never expected to hear from!

To Thine Own Self Be True

Yet here, Laertes! Aboard, aboard for shame!
The wind sits in the shoulder of your sail,
And you are stay'd for.
There ... my blessing with thee!
And these few precepts in thy memory
Look thou character. Give thy thoughts no tongue,
Nor any unproportion'd thought his act.
Be thou familiar, but by no means vulgar.
Those friends thou hast, and their adoption tried,
Grapple them to thy soul with hoops of steel;
But do not dull thy palm with entertainment
Of each new-hatch'd, unfledg'd comrade.  Beware
Of entrance to a quarrel but, being in,
Bear't that th' opposed may beware of thee.
Give every man thy ear, but few thy voice;
Take each man's censure, but reserve thy judgement.
Costly thy habit as thy purse can buy,
But not express'd in fancy; rich, not gaudy;
For the apparel oft proclaims the man;
And they in France of the best rank and station
Are of a most select and generous chief in that.
Neither a borrower, nor a lender be;
For loan oft loses both itself and friend,
And borrowing dulls the edge of husbandry.
This above all: to thine own self be true,
And it must follow, as the night the day,
Thou canst not then be false to any man.
Farewell; my blessing season this in thee!
-- William Shakespeare