'The only known way to progress in life is education' 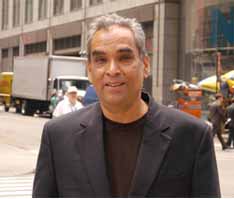 As it turned out, he was 'insufferably' good at studies. But he neither wanted to become a doctor nor an engineer, and getting into management studies was sheer accident. But he had an exciting time at IIM Calcutta. "They taught us subjects like sociology and psychology and I was thrilled!"

Today, he is chairman of the board of governors of the Indian Institute of Management, Calcutta (IIM-C). In a chat with Sumita Vaid Dixit, he discusses the power of education to transform lives. And football.

Until the age of 15, you lived in Kannur (Kerala), how were those years spent?

Playing football! I come from a historic town. My town has the oldest mosque; it was built in the 8th century, much before Mahmud Gazni's invasions. Vasco Da Gama landed there first. But yes, one day, I would like to create a football team and go win a big match. I am hoping that one day we do what we did with cricket in 1983.

But you never considered becoming a doctor like your father...

I found it boring. My father was a doctor; my grandparents were doctors. So I had seen that life. But two or three generations prior to my parents, we were poor peasants. Education had changed the course of our lives. So you see the only known way to progress in life is education.

Not completely. One of the things that really bug me is the IIM and IIT selection system that I am so intimately a part of now. The students that get to us now have been through some or the other tutorial college. They have paid a lakh of rupees on tuition before they made it to the IIMs or the IITs. So this virtually eliminates students who do not live in the cities, and those who cannot afford to spend a lakh on tuition.

Tests ensure that meritorious students can get in. The absence of it makes the system vulnerable to influence and corruption.

Our entrance exam is meant to be meritocratic. We at the IIM are saying that this is our gate to heaven and we will test you dispassionately. For the past 40 or 50 years, we have administrated this to the best. Now, 95 per cent of those who get into our institutes are from tutorial colleges.

Did you prepare very hard for the IIMs?

No! I stumbled upon the IIMs. One day an uncle said you should go and take the test. As it happened, the test was in Thiruvananthapuram three months later, and it coincided with a major football match! I gave the test and a few months later I got the interview call letter. My father was a little befuddled, well, he was a doctor! But my parents were liberated so they simply left it on me to decide.

It's said that it is the students that make the IIMs...

No institute is world-class without excellent students. That is the bare necessity!

But compared with the Harvard Business School or Kellogg, don't the IIMs fall short?

We keep debating this internally. There are two measures for this. One is the quality of students. The second, publishing output of the faculty.

Let me put this in perspective for you. Only a few of the many hundred American business schools produce most of the research output in America and perhaps the world! These include, Harvard Business School, Stanford, Kellogg and perhaps Columbia University and University of California, Berkeley. So you have to ask why is it that only these few are producing the bulk of the research, what about the other hundreds of American business schools?

The IIMs had done tonnes of work on outsourcing when it was just becoming fashionable, but the Americans dismissed it as the empirical data was Indian-specific. So for a while, the view held was that research that comes out from India is cute, nice but may not have a global relevance. That view has changed. Now, Indian research has a global appeal. In fact, the research done by the IIMs is certainly ahead of many of the American institutes except perhaps for those four. Research is expensive. The annual budget for IIM Calcutta was Rs 5 lakh, we raised it to Rs 2 crore.

Well, they certainly are holding up the flagging fortunes of magazines! (Laughs)

But yes, they are of value to parents and prospective management students. In my view, as long as a student gets into an IIM, whether it's Ahmedabad or Calcutta, it doesn't matter. Even with the IITs, students tend to pick those that are closer home. So by that logic do you see any difference among the various IITs? It's all perception-based.

But a few of the new IITs don't even have proper infrastructure...

The country is not built in a day. These things take time. At the time of independence, our literacy rate was 12 per cent; now the literacy rate is up to 70 per cent. So we have made great progress. Each state has a different education problem and it should be dealt with differently.

But if this country can produce a million people like Nirmala, then the country's education problem could be solved. If only there was a known way! Nirmala is a government schoolteacher from my place who took her class to an old-age home to help them understand the problems of society.

The system will change and evolve, we have to be patient.