News
Business
Movies
Sports
Cricket
Get Ahead
Money Tips
Shopping
Sign in  |  Create a Rediffmail account
Rediff.com  » Getahead » 'To this day we re-use envelopes and pins'

'To this day we re-use envelopes and pins' 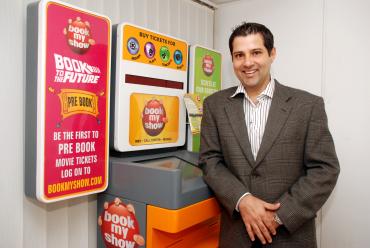 Ashish Hemrajani, founder of Bookmyshow.com quit his job at a top advertising agency to start his company, Big Tree Entertainment in 1999. He tells us how he survived the recession and succeeded despite all odds.

Ashish Hemrajani is awfully busy this season. The second half of the year usually means a lot more work for the man who has been the brains behind bookmyshow.com, the country's premiere online entertainment ticketing site. But he still checks with you if you use his site, a few minutes after meeting you.

The site that went live just three years ago now boasts of selling 650,000 tickets and users who spend over Rs 100 million on an average each month, making it one of the most preferred sites for buying tickets for concerts, live acts, plays and movies.

Hemrajani, who meets up with me in a Mumbai café likes to carry his office with him -- a laptop, an Internet connection and an iPhone that keeps him wired wherever he goes.

He is one of the ambitious urban professionals that have come to define changing India. Yet Hemrajani has a quality that not many of his contemporaries can really boast of. He hasn't changed his job for the last 11 years.

The entrepreneur was 24 when he quit a promising career at J Walter Thompson, the advertising agency where he was into client and account management. He started his company Bigtree Entertainment and has stuck by it ever since. The company has survived two crashes -- first the dotcom bubble that burst in 2000-01 and the more recent economic downturn of 2008-09.

Today Hemrajani is 35 and the company he heads eleven years old.

He tells Abhishek Mande what it takes to survive two downturns and how he made it from being a client-servicing executive to the CEO of India's premiere ticketing portal.

You were 22 when you got your first job at JWT. Two years later you quit and started Bigtree. You never were a nine-to-five guy, were you?

Yes, I guess. Back then I was just another kid who wasn't sure of what job he wanted to get into. But I knew I wanted to do something 'creative'. Starting my company was giving vent to that creativity.

Today 11 years later, I enjoy Monday mornings just as much as I enjoy Friday evenings.

So how and when did the idea for this come about?

I was on a break and was backpacking in South Africa along Storms River Valley when I struck upon this idea sitting under a big tree. So quite like Buddha who was enlightened, I realised where my true calling lay.

When I returned to India, I drew up a plan -- I had seen a need within the market in the meanwhile -- and put in my papers.

When I was serving my notice, (late) Anil Bhatia who was then the Mumbai head of JWT called me into his office to ask me why I was leaving.

It was a Friday evening and he had just returned from a meeting. I asked him for 45 minutes of his time. He heard me out and at the end of it he said, 'F**k the job!'

I didn't require any other validation.

What challenges did you have to face in the initial years of setting up?

The biggest challenge was to create an ecosystem for the business. When we first started we weren't allowed to sell tickets outside of the box office. So we had to meet the government officials convince them of the business plan before we even got off the ground. Sometimes the bureaucratic issues really got you down. Eventually 18 months later we got the required permissions to automate the counters and sell tickets outside the box office!

Also we started at a time when there were more single screens than multiplexes. The idea of watching movies in theatre was almost dead because the overall experience wasn't very pleasant.

Initially we would buy inventory in bulk or do block booking. So effectively during weekdays we suffered an actual loss and on weekends we suffered opportunity loss because the booking wasn't real time.

Also, during that time Internet did not exist in a way it does now. The credit card and debit card culture was yet to catch up and middle class did not have the corporate salaries they have now.

We faced some really tough times.

Your company saw two major meltdowns -- first was the dotcom bubble and now the recession. How did you survive those?

We were poster boys of online ticketing and were riding high. When we started the brand was called Goforticketing and then later it was called Indiaticketing. (Rupert Murdoch's) News Corp and Chase Capital Partners had invested in us.

In 2000 we had a team of 150. But when the dotcom bubble burst we were down to six people. That's when we began to question ourselves. We changed our set up and moved to a small office.

Only when we earned money we paid salaries, spent it elsewhere or put it in reserve. The housekeeping was put in order... we ran the business as it should be traditionally run.

Later when we got re-invested, we continued with the same values. To this day we re-use envelopes and pins that come to the office and use the blank side of a printed paper!

Last year we suffered three major blows back-to-back. We had won the ticketing rights to two IPL teams when the action moved to South Africa and we lost out. Then the movies strike happened, which meant there were no ticket sales. And finally the recession hit us so we weren't selling any software.

We tightened our belts yet again. All the bulbs were alternate bulbs, the air-conditioning was set at 24 and the remote controls were locked away. The coffee machine was changed. For six months no one travelled anywhere.

Then we got together everyone and decided the slabs for pay cuts that ranged between 10 and 30 per cent depending upon the person's salary slabs. Some people below a certain salary slab were given no cuts at all. Bonuses were stopped. So we waded though the recession without having to let go of anyone.

Some of the practices stayed -- the air-conditioning is still set at 24, the coffee machine still remains and we still fly low-cost carriers.

What were your learnings during these downturns?

The biggest learning so far has been that everyone falls and life will throw challenges at you. It is how quickly you can stand up again and learn from it that shows your character.

We've always been realistic and honest with our investors and that has held us in good stead.

The downturn taught us to under-deliver but over-perform and that when the market is greedy we have to be careful. We didn't hire when the market was upbeat, instead we picked up some great talent during the recession.

But the biggest learning of it all was that your best friends are your employees and colleagues.

Is employee retention a challenge?

I've never believed in the concept of team-building exercises because I feel you need one when there is something wrong.

We try and make the environment as happy as possible. There are no designations in the company and we start off from a position of trust and empowerment.

The idea is to give people the space and time to function. Many of the people who are with us today have stayed with us for the last seven years, which is saying something because we are an eleven-year-old company.

How did Bookmyshow the brand come about?

In 2006 and we had seeded an online brand called movietel.co.in where you could telephone us and buy a movie ticket. For the year that it existed we got good volumes. That's when we decided to make a foray into a real-time movie ticketing system.

Having bought back our company two times over and had run it for four years by ourselves, we had now started looking for investors afresh.

This was one rollercoaster ride. There were days when half a dozen VCs would be kicked with the idea and there were others when the feedback wasn't very encouraging.

Finally, we zeroed in on Network 18 because they liked the pitch and we liked their openness and flexibility. It was a meeting of minds.

When you now look back at all these years what would you say has been your biggest learning experience?

I see a lot of young people jumping jobs at the drop of a hat. When I quit my job I saw myself doing this for a long time. I feel whenever you are about to take up a career it is important to see yourself doing whatever it is you are doing for a very long time. Else you will just be flitting on the surface. It has been eleven years since I started my company and it seems like it was just yesterday.

What did your parents have to say about your choice of career?

(Laughs) For the first few months my father didn't even know I had quit my job. Both my parents thought I was on an extended vacation. Till one day I told them what I was doing.

My father panicked initially. He is a Partition child and has travelled quite a bit within India before settling down in Juhu. He was a businessman once but never really understood the concept of a venture capitalist. The idea that someone would be willing to invest in a business that hasn't even been set up and make initial losses is beyond him. Dad's biggest fear was that I had mortgaged his house!

Today he is fine with it.

Where do you see your company going in the next five years?

Bookmyshow offers a lot more options than just movie tickets. Today you can book tickets for a play, a ground event or even a gig and a concert. The idea is to give people options to entertain themselves over any given weekend. If I can continue to fulfil that need I would say I am successful.

She quit the 9-to-5 drill to track tigers

A limbless boy's story of grit and courage