Friendship Day Diary: It's ok to leave old friends behind 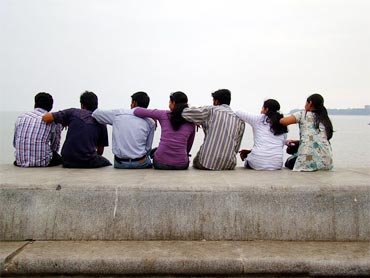 The first Sunday of every August is Friendship Day. This year it's August 1. On the eve a friend broods over his friends that never were meant to be.

Whatever the symbolisms of all the 'Days' that we observe in Inida in our brazen efforts to ape the West, the fact remains that these symbolic events do make us nostalgic, bringing forth memories long lost. Memories of friends long lost.

Rajesh Bhandarkar, in one such wistful moment, broods over friends that were not to be

Nine years ago, on a wet monsoon day, the three of us stood outside Mumbai's Gaitey-Galaxy-Gemini theatres.

The large cinema halls have been an institution for cinema buffs for generations. My two friends and I were no exceptions. It was the first day second show of Dil Chahta Hai, a story about three friends unsure about where life would take them.

Three hours later, when we came out of the hall none of us spoke for the longest time.

I would like to believe that the same thought was running through our heads: Where would we be ten years later? None of us spoke of it though. Guys never bonded that way then and I think they don't even now.

The following year, Naresh changed colleges and I chose a subject that Rahul had no inclination for.  We rarely shared the same classroom and the scythe of time took its toll. Before we knew it, we began to forget birthdays. Since we didn't share any subjects and exchange notes, we began to forget telephone numbers.

Towards our final year of university we were happy to forget about each other's existence.

I suspect a part of it had to do with a few choices I made then. Later, I learnt that one of them left the city and the other took up a job offer soon after his masters.

Eerily, scenes from the film kept coming back to me.

Recently Rahul and I happened to see each other in a local train. It had been over six years since we'd crossed each other's path. So I guess we were justified in narrowing our eyes when we saw each other. We exchanged awkward smiles and I secretly hoped for my destination to arrive soon. Needless to say it didn't.

Partly out of compulsion, partly because we couldn't ignore each other and partly (perhaps) because our friendship meant something to both of us, we started talking.

First it was about this and that, then about how our families were, then I think we spoke something about how hot it can be in Mumbai and about what we were doing with our lives.

They say people change over the years. But that morning, speaking with Rahul I realised how much of us doesn't!

We still had the same views on life and still steadfastly held on to them. And though we didn't get to each other's throats like we had a few years ago, we realised whatever happened was perhaps for  the best.

As the cliche goes, all of us moved on.

Naresh who was studying to be an archaeologist went on to complete his business management from a prestigious institute. Rahul, I am told, does a lot of number crunching for a start-up financial firm.

As for me, I like to flip the Dil Chahta Hai DVD every once a while... not so much pining for the past as much as out of a sense of wonder and amazement of how sometimes, just sometimes, life can imitate art.

A few things every man should know!