News
Business
Movies
Sports
Cricket
Get Ahead
Money Tips
Shopping
Sign in  |  Create a Rediffmail account
Rediff.com  » Getahead » Excerpt: This time he beat her up badly

Excerpt: This time he beat her up badly 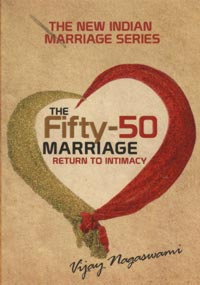 The second title from psychiatrist and relationships counsellor Dr Vijay Nagaswami's 'New Indian Marriage' series, The Fifty-50 Marriage: Return to Intimacy caters to readers who are in committed relationships that have maybe lost some of their spark along the way. But it is never too late to reignite it, says this self-help book.

We bring you an excerpt from Chapter 8, The Violent Marriage:

Radhika was furious the first time it happened. Until then, she thought her marriage with Shyam had been a civilised one. But out of the blue, he'd hit her. A resounding slap across her face. All because she refused to go to his office party, since she was having her period and was feeling quite terrible. She had always believed that marriage was about sharing and caring, and felt it was perfectly reasonable for her not to want to go along with him to a boring office party, particularly since his office had parties two or three times a month.

Being a feisty young woman, she slapped Shyam back. Shyam stormed out of the house. What enraged her was that there was no contrition or remorse on his part over the next few days. He was sulky and sullen and refused to talk to her for about a week, after which he started talking to her normally like nothing had happened. This too she found unacceptable. She had a need to discuss what had happened and wanted a commitment from him that it would never happen again.

She sat him down and asked for a conversation on the subject. He brushed aside her concerns saying that this sort of thing happened in all marriages and that she shouldn't make too big a deal out of it. He wanted to have sex. She refused to let him touch her. He begged and pleaded with her to drop the subject. She just couldn't. She got louder and shriller and nastier in her verbal assault on him. He hit her again. This time he beat her up badly. Her body was covered in bruises where he'd grabbed her, twisted her and beaten her. Her head hurt where he had banged it against the cupboard and later the wall. Her chest hurt where he had sat on her and slapped her face over again. She was shocked into silence by the sight of his face, for he looked like somebody else, not the gentle husband she thought she had.

She locked herself in her room that night and next morning, when he'd left the house to go to work, she packed her bags and walked out. The next time she saw him was in the Family Court, where, despite the judge and the court-appointed counsellors telling her that it was within cultural norms for a husband, once in a while to beat his wife, she refused to agree to a reconciliation. In course of time she got her divorce and went on, three years later to marry a divorcee with whom she is leading a reasonably contented life.

Gita, a young homemaker who came from an econmically less well-off background, couldn't be as decisive as Radhika. For one thing, her husband, Hemant, got violent with her only after her children were born. For another, she was economically dependent on him, since her parents had not been able to educate her for a profession, having spent all their life savings on educating their son who had been killed in a traffic accident. Also she had no place to go, for her parents too had passed on since she got married. She felt well and truly stuck in a marriage where she had to scamper around Hemant and do his bidding. For, as long as she did this, he was nice to her.

The only problem was that she rarely recognised what displeased him and was therefore never sure when he would beat her up.

Since we live in a patriarchal society, most spouse abusers are men. Since men have been taught ever since they were boys that they should 'control' their wives and since, more often than not, they are physically bigger and stronger, they tend to resort more easily to using violent means to take charge of their marriages, if they find their wives attempting to challenge their authority.

A study conducted in 1998 in rural areas in Uttar Pradesh and Tamil Nadu threw up some interesting findings. It was found that a large majority of women interviewed for the study, felt it was socially acceptable for fathers, brothers and husbands to hit them with the intention of 'correcting their mistakes'. And herein lies one of the greatest obstacles in the resolution of the problem. I am not for a moment suggesting that women are responsible for this disturbing social malady. It is very clear that the problem has to be owned by the abuser. But when social attitudes are so much in favour of perpetuating patriarchy, the oppressed have to learn that they too play a role in perpetuating this distressing social behaviour and must learn to stand up for themselves and escalate matters in an effort to find a resolution.

However, it is not only women who are abused by their spouses. It is no more uncommon to see men, particularly in urban areas, to be victims of spousal abuse from their wives. Typically, verbal and emotional abuse are more common, but physical abuse also does take place. Women who feel the need to dominate their spouses may tend to, particularly if the man is soft-natured and easy to push around, intimidate their husbands by constantly belittling them in private or public, thereby establishing dominance in the marriage.

Also, since urban women are getting bigger and stronger, some of them may lash out physically at their husbands by slapping, scratching, kicking and throwing things at them. Since very few men want to acknowledge publicly that they are being abused by their wives, cases of spousal abuse of males are largely under-reported, although in recent times, abused men have been coming together in support groups and have formed associations to help each other deal with he situation. The fact that all laws pertaining to domestic violence principally protect women makes men's situations even more poignant.

Excerpted from The Fifty-50 Marriage: Return to Intimacy (Rs 295) by Dr Vijay Nagaswami, with the permission of publishers Westland Ltd.

'The rules of marriage are changing in India'