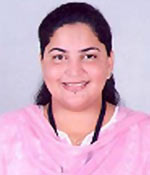 It's tough being a woman in a 'man's world', but as more women make ther presence felt in the corporate sphere, things are getting easier, gradually. On the occasion of Women's Day, Iti Kumar, vice president, People Development, GlobalLogic, shares what it means to be a career woman in today's world.

Today's woman has come a long way and can well be termed a "Super Woman". A woman has always played multiple roles in her life, this begins from being a daughter, wife and a mother. It is not only a challenge for a woman but the manner in which she takes up this challenge and the swiftness she shows in switching into different roles that makes her a distinct personality.

In India, for ages, a woman has been seen as an individual who needs to fit into domestic life and should not strive or aspire for a career or an independent identity of her own. Being subject to a male dominated society, she was put through immense suppression and pressure. However times have changed and with education there has been an awareness of one's importance and value and this has created a sense of superiority in the minds of women today.

Today's woman focuses on her career, knows what she wants in life, is strong willed and at the same time able to manage career and her family responsibilities.

Women do have their own unique way of looking at business goals and objectives as compared to men. Men are more tuned into the technical aspects and are analytical in their approach often compromising on people management and the details of running the business or project.

Women on the other hand, tend to have a more holistic approach, they are detail-oriented, and keeping the business goals in mind they also focus on the softer aspects of people management, interpersonal relations internally and externally.

This difference is primarily because of the nature difference between the two genders. The core strength behind this difference is the traditional roles of the women. Being a mother, wife and sister, most women inherit such skills which cannot be learnt by most men.

Women today are also more competitive than before. They not only manage their household responsibilities effectively but also manage their professional responsibilities efficiently. It's women who have been more adaptable than men as over decades they have started performing an added role of co-earner. Despite the dual responsibility, they have still been attached to their basic traditional values of cooperation, sacrifice, sympathy and nurturance. She harmonises the duties of a wife, mother and a career woman. She efficiently manages the home and fulfils her social obligations.

When it comes to leadership, there are certain unique qualities that women possess which make them different from male leaders.

There are quite a few challenges or issues that a woman continues to face in the workplace though.

It has not been smooth sailing for me as a career woman. I too went through challenges while working. It becomes more difficult to maintain oneself and sustain when you are in a position which affects many people working with you. It is critical to effectively manage yourself since your behaviour and mannerisms are being observed by various stakeholders and you are accountable to your internal and external customers.

As a woman I believe that one should stay calm, composed, should prioritise her tasks and should become a good time manager. These traits will only help in growing in the corporate field.

I have strived hard to handle emotions, stress and have given time to personal matters as well as have been able to balance work and job-related pressures. The journey from a single successful woman to a married successful homemaker and a working professional has been a tough one but has enriched my personality and has added value to my thoughts and learning's in life. Overall my view is that a woman is a "go-getter" due to her internal strength and she should always remain so.