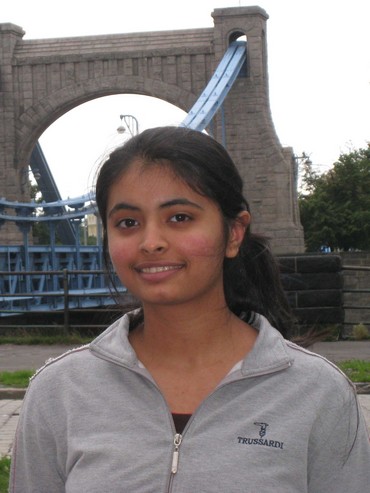 Aakanksha Sarda, the topper amongst girls at the IIT JEE, shares her success mantras.

It is a busy day at IITians PACE, a Mumbai-based coaching academy that trains IIT aspirants. There has been a steady stream of journalists queuing up to meet some of the toppers who have been tutored at the academy. One of them is Aakanksha Sarda, a student of Sathaye College.

Aakanksha has stood first amongst the girls who appeared for the Joint Entrance Examinations (JEE) and her all-India rank is 18. Dressed in a pair of fashionable gladiator shoes and sunglasses resting on her head, Akanksha looks everything like a diva should. Beneath her fashionable exterior however lies a passionate physics student.

Being in the limelight isn't new to Aakanksha. She was recently in the news for being selected to represent India at the International Physics Olympiad that will be held in Croatia in July.

Aakanksha completed her schooling from Mumbai's Jamnabai Narsee School where she topped with a 97-per cent score and recently cleared her HSC exams with a score of 89.5 per cent.

'There isn't a formula to crack the JEE'
"I never timed my study sessions," she says. "There were days when I studied for half an hour and other times when I studied for over ten. I never followed a timetable. The only time I'd stop is when I would feel exhausted.

"You have to love what you study. If you don't, no matter how much time you spend with your books, you will not get the desired results. (Many of the toppers) are where we are because we study for the love of it and not because we have an examination ahead of us. That is what makes the difference."

'I used to hate Physics'
The 18-year-old who is representing India at the International Physics Olympiad once hated the subject. She says, "I almost took up Arts just because I didn't like it. But my mother insisted that it might be something to do with the way physics was taught in school. Around the time I attended an orientation lecture at IITians PACE and have never once looked back."

She points out that one of the biggest flaws in the schooling system is the almost obsessive need to stick to the syllabus. "If you ask something out of the ordinary you would be told that it wasn't in the syllabus. It was very putting off. However here (coaching class) and at the (Olympiad training) camp, you are encouraged to ask questions."

'Eleventh grade was the most fruitful year'
While she admits that her first year in college was most fruitful, it was also when she was recovering from a culture shock. Her school, Jamnabai Narsee counts some of the city's affluent children amongst its students. Her college, Sathaye on the other hand attracts most of the studious lot of children.

"I started learning French and Chinese around that time and also participated in the Linguistics Olympiad," she says.

In college, she scored 89.5 per cent, a modest tally by her standards.

Dealing with setbacks
The topper says that the last six months have been the most difficult. "I got malaria thrice during this time. The third time it was in the middle of my board examinations. They had to carry me out during one my papers," she says adding that you cannot afford to dwell on such things.

Aakansksha adds that while there was never a time when she failed an exam, she did do poorly once in school. "Thankfully everyone supported me and I took it as a learning experience. If I were to advise someone on setbacks, I'd say you have to think of all the successes you've had, learn from your mistakes and move on."

'Won't be joining IIT'
With the JEE behind her though, Aakanksha doesn't plan to get into IIT at all. "I was contemplating between MIT (Massachusetts Institute of Technology) and Stanford. After visiting the two institutions I've decided to get into MIT (where she has already been admitted into the undergrad programme). The reason I didn't want to get into IIT was because I am still unsure of what I want to do. MIT will give me the option of switching not just courses but also streams. If I want I could walk out with a degree in linguistics or economics. It also offers me to take courses in the sciences at MIT and humanities at Harvard."

Ask her why she decided to appear for the JEE and she says, "It is supposed to be the toughest exam in the country. It was a challenge I wanted to take up. Also I was prepared for it so wanted to give it a shot anyway."