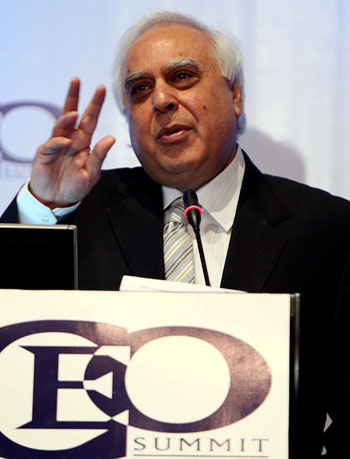 As India gradually opens its doors to foreign universities, Union HRD minister Kapil Sibal sheds some light on why more universities are looking to come to India. Sheela Bhatt reports.

Kapil Sibal, union minister of Human Resource Development, believes that higher education offered by US-based universities is much better than that offered by universities in the United Kingdom.

A claim likely to be strongly contested by UK's education industry, that is trying hard to capture the fast-expanding Indian education market.

While talking of the entry of foreign universities into India, Sibal told rediff.com, "The US is ahead in postgraduate education and most of the education imparted in the UK is for undergraduates. That's why the US is far ahead of other nations. We should follow the US example. Of course, the quality of undergrad education in the UK is very good and we should try to replicate it but if you want to be a world leader we should have the US research and postgrad education system."

While talking about the importance of getting world-renowned universities into India, Sibal said, "In this part of world, we have a 2.5-billion population between India and China. Total population of the world is 6.2 billion. Half the population is in this part of world. Capital is attracted to human resources where market is. India is a much better market than China because India is a younger nation than China. We have 546 million people who are less than 25 years of age. In this market, the young will have to be educated and to fill up their need, capital will be attracted into our market."

He said it is imperative that Indo-US bilateral relations focus on education in the coming days. "The US is the largest provider of capital in world. The Indian education sector is a market of opportunities. Not so much primary and secondary but higher education. The global community has realised that if you invest in India you can deliver education at a much lower cost than in the West, because your infrastructure, faculty training and other economic factors are costing less. You get cheaper education without having to travel. It is going to happen in India."

The reasons for which manufacturing went to China and outsourcing came to India were for the same reasons Western education will come to India at a lower cost, he said.

Foreign universities can join Indian institutions only when the Education Tribunals Bill is passed, which got stuck in the Rajya Sabha in its last session. Sibal is confident that it will be passed in the coming winter session of Parliament. "It's not a 'Kapil Sibal agenda'. It's on the national agenda," he said.

The Educational Tribunals Bill, 2010 provides for the establishment of educational tribunals. These tribunals will help the effective and expeditious adjudication of disputes involving teachers and other employees of higher educational institutions and will help students, universities, institutions and statutory regulatory authorities. It will have the power to adjudicate penalties for indulging in unfair practices in higher education.

Sibal also mentioned that there is tremendous interest from foreign universities to set up shop in India. "Whenever I go to the US and whenever I meet Americans here, they have only one question -- how can we invest in India, in education?"

Virginia Tech is already in Tamil Nadu, he informed. They have already entered in agreement with Indian company MARG. Schulich School of Business of Tornoto (considered one of the best business schools globally) is already here in association with Mumbai's SP Jain Institute of Management and Research. They joined hands in February 2009 to start an exchange programme.

UC Berkeley has a new partnership with Indian Institute of Technology (IIT), Kharagpur. The New York-based Columbia University has announced its interest in a research institution in Mumbai. Ohio University is also finalising it's plan to enter India.

Sibal said, "In different ways and different forms, education institutions want to come. It will not be more costly than what we pay in foreign countries when our children fly there."

He mentioned that even smaller countries like Nepal, Singapore and Malaysia have got foreign universities, now.

Sibal dismissed the idea about a possible growing Western cultural influence through these universities. He stated, "We are not talking about culture here. Why can't we teach culture in India as we want to teach?" He also added that the university syllabus is something that institutions themselves would decide as per norms and the government can't interfere. He added, "The government can't control it. It is a market, our children will learn what they want to learn."

Sibal, who is a vocal supporter of Indo-US bilateral relations, said President Barack Obama's visit will be successful because the relation has acquired its own dynamics.

"Some people say President Bush was much closer to India, I don't quite agree. It's the dynamics of politics of the future that bring India and US closer, not just in the area of security and education but in many other ways."