Venezuela: Where beauty is a national sport 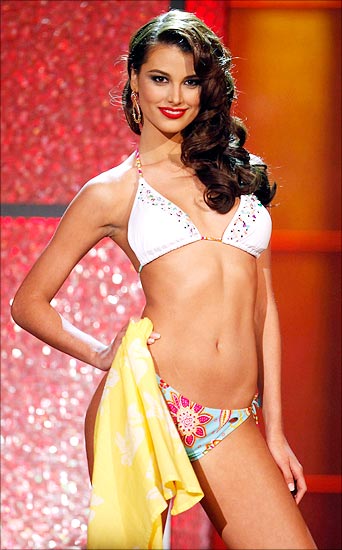 India is no stranger to success at international beauty pageants.

And India showers her beauty champions with adulation, keeping them in the public eye for years and assuring them starring roles in Bollywood blockbusters. In short, India is a global giant when it comes to beauty.

In fact, only one country stands toe-to-toe with India in producing and adoring beauty pageant winners: Venezuela.

They are the two unquestioned leaders. And to be honest, Venezuela has India beat.

But, the question begs, how is Venezuela so dominant?

One-fifth of Venezuelans' disposable income is spent on beauty products First and foremost, the tiny South American nation, with a population of just 27 million, has churned out more major international beauty pageant winners than any other.

Because in Venezuela beauty is a national sport.

In fact, the annual Miss Venezuela contest is the country's most watched TV programme year after year. Winners are propelled into a life of instant stardom, much like in India. They star in television serials, host talk shows, and become 'faces' for an entire nation.

In fact, one Miss Universe winner, Irene Saez (1981), actually used her victory to segue into a successful career in politics. The Venezuelan national elections of December 1999 are famous for having seen Hugo Chavez ascend to the Presidency, but less known is that Irene was a viable candidate in the race, before ultimately finishing third.

Beauty permeates all facets of Venezuelan life. A recent report estimated that a shocking one-fifth of Venezuelans' disposable income is spent on beauty products. Also, owing to the immense diversity in ethnic make-up of Venezuelans (Mestizo, Native, Portuguese, Spanish, African, and more), the women are beautiful and varied in their looks, often strikingly so.

14 hours a day of beauty classes 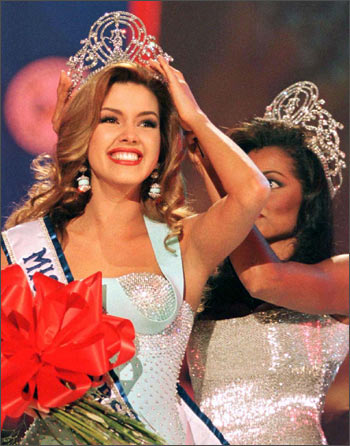 As for the Miss Venezuela pageant, it's big business.

Huge marketing firms fight for advertising space. Pundits analyse the contestants down to their toenails. And millions tune in to watch the competition via their televisions, while thousands of high society members bid for tickets to the actual pageant, which represents a half-calendar year of intensive competition.

Early each year, the selection process begins when thousands of young women (aged 17-25) send in their applications. They are usually from wealthy families, and have spent much of their teenage years modeling already.

From those thousands, 500 are picked to enter their state beauty competitions, before the list is pared again to 60. That's when things get tough.

Those 60 girls are then taken to the famed Miss Venezuela School in the capital city of Caracas for two months of intensive training.

Classes at the school begin at 8 am and end at 10 pm, a staggering 14 hours per day, where a platoon of teachers instruct the girls in how to move properly, pose for photographs, walk in high heels, use their voice, how to apply make-up, show etiquette and grooming, and ace the vital interview that often serves as a determinant in major beauty pageants.

Of breast implants and nose jobs 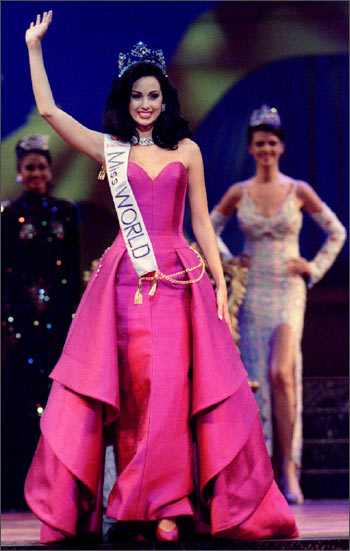 From 60 girls -- all of whom have already survived rounds and rounds of elimination -- 28 are selected to compete in the prestigious Miss Venezuela contest, and stay on.

The competition is so tough that many women who qualify for and excel in international pageants have to attempt five or six years consecutively in the Miss Venezuela contest just to make to the global stage. Those who are chosen to compete on an international level are asked to live at the school for an additional year of vigorous training.

If you had to choose one person responsible for Venezuela's mind-boggling beauty success, you'd choose Osmel Sousa. A former adman, Sousa is today the President of the Miss Venezuela Organisation.

He wields so much power in this pageant crazy nation that he's rumored to have disdainfully remarked of Hugo Chavez, "Who's he?" The school is his baby, his brainchild. He recently reportedly told The Times (UK) that, "In other countries there is no organisation like there is here. We have our school where the girls are prepared for this philosophy: to be beauty queens. The preparation for Miss Venezuela is akin to that of a top athlete." He reportedly added that the point of all this schooling is "to make them perfect." 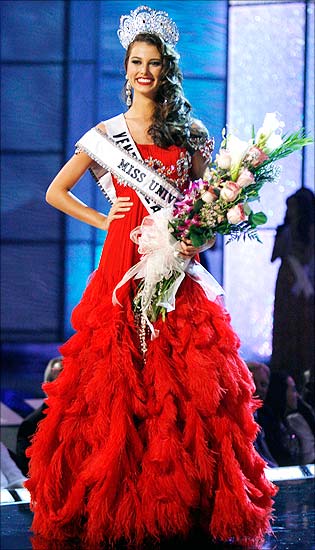 He's also been savaged in the press for his enthusiasm about his contestants getting plastic surgery, which he reportedly said is just 'correcting little details'. It's true that many of the Venezuelan beauty queens have had nose jobs and breast implants. In the past it's been reported that the beauty school employs dental docs who have been known to cut girls' gums so their teeth look bigger.

If, as Ralph Waldo Emerson once said, "Love of beauty is Taste and the creation of beauty is Art," then Venezuela is indeed a nation of great taste. And Osmel Sousa is an artist of the utmost skill and calibre.