In the shadow of the Himalayas 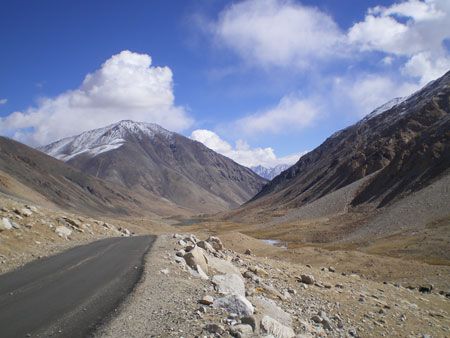 "You like it?" my guide asks as I look out from my roof terrace over Nimoo, a dusty village in far northern India. I nod, only half engaged. I'm too consumed with watching a woman who, like an ant, is climbing a hill in this strange moonscape of silver and gray. I can see a prayer wheel in her hand, can almost hear the little tik-tik as it spins. I wonder where she's going, for there's nothing but emptiness ahead. Somehow the scene deeply resonates. Perhaps it's because she's doing exactly as she's always done -- going about her business, nodding another woman good day, tipping her top hat with its corners upturned. Perhaps it's the noise of children playing in the fields, the smells of roasted corn and boiled milk rising up toward me. Or maybe it's because I'm not being cut off from the community, which is so often the lot of the Westerner in India.

I'm here in the Indus Valley to see Shakti Ladakh, a network of sophisticated homestays occupying two-story Ladakhi mansions strung across several villages close to the regional capital of Leh. The premise -- a rather singular one in India -- is to invite visitors to immerse themselves comfortably in a traditional culture that has, for the most part, never been accessible to them before. "I want people to fall in love with India all over again, for them to connect with the essence of the place, its people, its culture," says Jamshyd Sethna, a Parsi travel specialist from Mumbai who launched Shakti Ladakh last summer.

Walking is the best way to achieve intimacy with the landscape 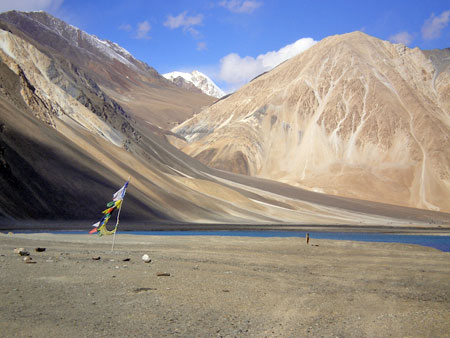 The homestays are located in the villages of Stok, Taru, and Nimoo, all within 28 miles of one another. They are without question a cut above any other guesthouse in the region. Each has three rooms with huge beds with European mattresses (the same brand that is used by Amanresorts) and duvets like clouds. The pretty cedarwood furniture, by an Italian designer, has been custom-made in Rajasthan. All bathrooms are en-suite and showers are steaming hot. Linens are freshly pressed; the tables laid with impeccable china, beaten-brass cutlery, and burnished brass bowls. Guests are looked after by the Ladakhi homeowners and Shakti Ladakh's English-speaking guides and hostesses. Visitors can hike six to nine miles per day, or choose to raft, from house to house -- you decide your itinerary, walking less if you prefer -- following the milky waters of the Indus, visiting monasteries, talking with monks, meeting with rimpoches, enjoying picnics complete with tables and chairs in orchards of walnuts, apples, and apricots.

"Walking is the best way to achieve intimacy with the landscape," Sethna insists. And this landscape is nothing like any you've seen elsewhere. Geologically, Ladakh belongs to the Plateau of Tibet, watered only by rivers and snowmelt, the white peaks of the Zanskar Range as clear as ice against blue. The Indus snakes through it -- liquid mercury flanked by patches of irrigated green that are all the more conspicuous against a landscape where nothing much grows. For this is a 9,850-foot-high Himalayan desert: India's monsoon clouds are punctured long before they reach Ladakh's altitude. 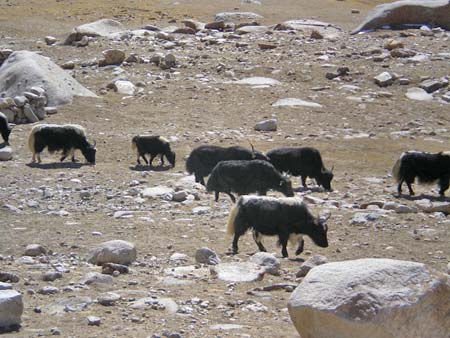 It is Ladakh's bleak emptiness that draws the most intrepid of travellers, along with the brief poplar blossom that looks like snow. One can walk for hours amid the fields of barley and the mulberries strung along the rivers. Under a changing sky, with clouds scudding low across the horizon, the water turns from milky blue to turquoise. Buddhist burial grounds and stupas punctuate the roads that traverse jagged-edge passes such as Khardung La, which marks the boundary between the Indus and Nubra valleys. The people, who are more Tibetan than Indian, have moon faces and eyes that squint in the sun; this makes them look like they're laughing even when they're cross. The children are always keen to talk, to swap pens and inspect a mobile phone. The monasteries, many of them newly renovated, are full of chanting and drumming and apprentice monks running around in flip-flops. Prayer halls smell of yak butter and incense and -- most important -- are filled with living communities.

Which isn't to say Ladakh is some Himalayan idyll. For six months a year the climate is so bitter, so cruel, with temperatures dropping to minus 22 and below, that there's little to romanticize. Because of those high mountain passes, there's no road access between September and June. And unless you take things slowly, altitude sickness can be a real concern. 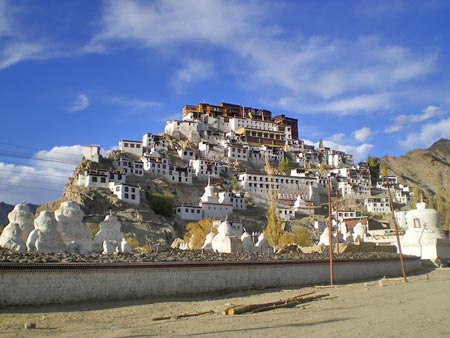 Politically, the region poses its own challenges. Along Ladakh's eastern edge lies India's once contentious border with China; to the west, the Line of Control, disputed territory with Pakistan -- hence the military presence, with army bases feeding soldiers to India's borders. Yet Ladakh remains peaceful. Its foremost challenges are to protect the region's Buddhist identity (so ravaged in Tibet) and to maintain the Ladakhi livelihood, which remains inextricably tied to ancient rural traditions.

One of the more passionate proponents of this effort is 43-year-old HRH Jigmed Wangchuk Namgyal. His ancestors ruled this strange, high-altitude desert from AD 900 until 1834, when their political power was lost to the neighbouring Dogras of Jammu and Kashmir. Yet his family remains committed to cultural philanthropy -- in particular a vigorous desire to preserve Ladakh's monasteries. "Conservation and preservation -- it's only just beginning here," Wangchuk tells me over tea, describing how in the past buildings might have been torn down rather than rebuilt. With new initiatives being driven by the local community, there's now hope that Ladakhis will protect their cultural heritage.

Wangchuk's latest initiative: to raise Ladakh's profile among discerning visitors. To that end, he has converted three rooms of his ancestral palace -- a four-story mud-brick and stone edifice built in 1822 -- into a modest hotel.

Leh is where the Ladakhis will have to work hardest... 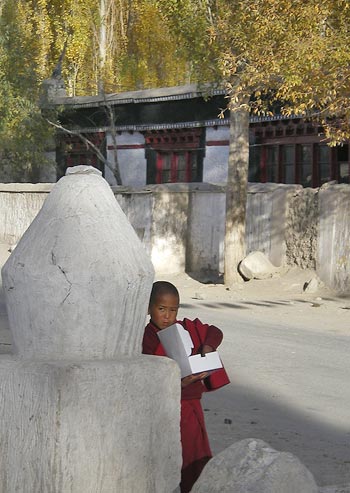 The Stok Palace Heritage Hotel is located nine miles outside Leh. Wangchuk still occupies a large part of the 77-room palace. There are three guest suites, including one in lapis blue and another in ruby red, with balconies overlooking the Indus Valley. (Two more rooms are under way.) The aesthetic is wholly Ladakhi: every detail has been carefully handcrafted, from the Tibetan and Ladakhi rugs to brightly painted woodwork by local artisans. "Wherever there are cracks in the wood, I've kept them," Wangchuk says. "I want to show people the building's spirit." There's also a quirky museum featuring jewels, armour, and an impressive collection of thangka -- the painted and embroidered ceremonial scrolls that hang in Buddhist monasteries across the region. Some are more than 450 years old, their colours made from crushed coral and turquoise. His crown, in silk and gold and encrusted with rubies, dates back a millennium. "I want my son to understand the importance of family and history," Wangchuk says. "I'm trying to teach him the importance of Ladakhi values and the Tibetan script."

Just as important to this legacy is the hotel's small scale; to Wangchuk, Ladakh's future depends on the region not being overwhelmed by volume-driven tourism. This has been the scourge of neighbouring Nepal.

Leh is where the Ladakhis will have to work hardest to keep the pressures at bay. The city nestles in a wide, wind-blasted valley in shades of sun-snapped brown, many of its elements unchanged from when I last visited 16 years ago. Boxy Tibetan-style houses with mud-brick walls line the narrow alleys. Vegetables are laid out to dry on flat rooftops, where Ladakhi women gather in circles on stools, their long braids almost touching the ground, arms weighed down in thick silver cuffs and chunks of red coral.

Some places are worth protecting 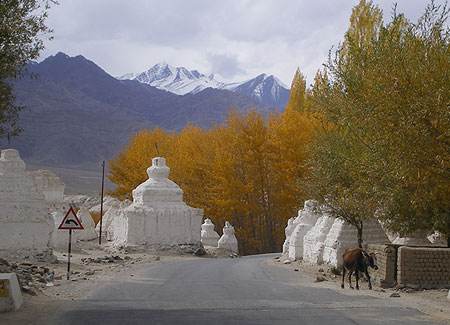 But today, as I walk from the 17th-century palace toward the town centre, it feels as though everything's been reborn a little brighter, the Namgyal Tsemo gompa (monastery) shining a little whiter than I remember, though still whipped by a million prayer flags. Leh has mushroomed into the bowl of the valley: I notice more people, more four-wheel-drives, more billboards in German and French. There are English-language bookshops and pricey antiques stores owned by incoming Tibetans and Kashmiris. I remember a typical meal here in 1992 consisting mostly of Momo, steamed and fried Tibetan dumplings stuffed with vegetables and meat. Today, menus offer everything from Italian breads to Israeli breakfasts.

In other words, Leh is beginning to look a little bit like Goa, Kerala, or any number of places in the rest of India where tourism has brought in Internet caf s, yoga retreats, and backpacker hotels.

Perhaps this is why the woman advancing up the hill in Nimoo is so significant to me. As I watch her from the rooftop of the Shakti homestay, she is unaware of my quiet incursion into her village. It seems remarkable that I can witness this scene without her feeling affected by my presence -- a rare event in this world of "managed" tourism. I'm being allowed to experience the everyday, the unpackaged, the unremarkable -- all at the pace of a walk. For the first time in years I'm being forced to slow down, made to think about how to travel in a place without contributing to its demise. In this moment, I find Sethna's vision convincing. There are some things, like the little tik-tik of a prayer wheel advancing up a hill, that, in their simplicity, are worth protecting.

Sophy Roberts is the editor-at-large of Departures.