Driving to the top of the world 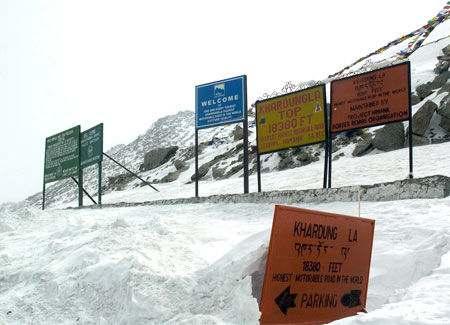 It was around 6:30 am when we started for Nubra valley from Leh. Before coming to Ladakh I did a thorough study of each area, and the world's highest motorable road which goes to Nubra valley from Leh via the highest motorable pass 'Khardung la' was the biggest attraction. Not only as a photographer, but as an adventure driving enthusiast, I wanted to conquer this road. Luckily enough, we managed to get our hands on a Scorpio that was in mint condition.

The first half of the drive was not too difficult barring the sharp hairpin turns on that narrow lane. My driving experience on the different ghats of Maharashtra did help a little, but the steepness was nowhere near comparable. It was the end of April and tourist season had barely begun since the temperature at night often touched freezing point. We wanted to keep the windows of the vehicle open to take in all the natural beauty around us, but the biting cold wind was too much for our Mumbai skin to take. We had to use moisturising creams heavily every hour. I really don't think I've used as much cream in my life as I used in a week's time in Ladakh. 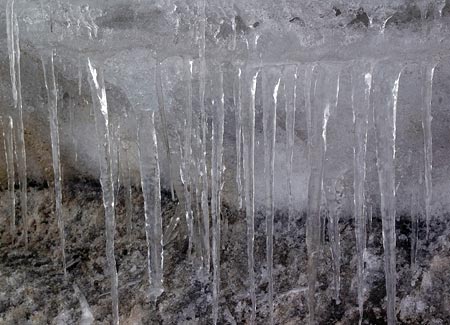 South Pullu (around 15,000 ft) was our first halt, for breakfast and the official check for valid permits. There were a few companies of the army there and a senior officer told us that they had been sent there for acclimatisation for Siachen. Shortly, they would be on their routine 90-day posting at the world's highest battlefield -- Siachen glacier.

Our breakfast was simple -- Maggi (that's the most widely available food in all of Ladakh) -- cooked in five times more water than needed. As soon as we finished the watery Maggi, there was the much-awaited hot tea, which unfortunately went cold in a few seconds thanks to the chilling 7 degrees C.

The next phase of the drive was really nerve rattling. The Border Roads Organization (BRO) team had cleared the snow early that morning, but there was fresh snowing after that. With the wind, powder-like snow was everywhere and we had to start the car wipers to get a some-what clear vision of the narrow road ahead. Driving at less than 10 km per hour, we were merely crawling. At times, when the vehicle began to skid on the snow-laced road, we thought to put iron chains on the wheels (which prevents dangerous skidding). 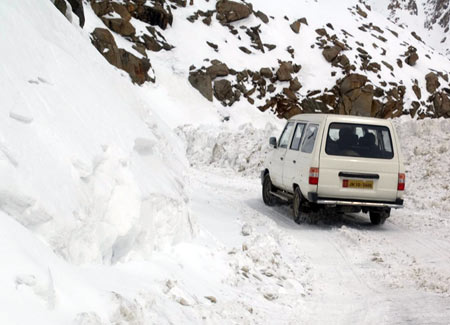 Image: On the way to North Pullu

Just two kilometres away from Khardung la pass we had to stop. Ahead of us was a small bus that couldn't cross a snow-and-water-filled area. We used the halt as an excuse to get out of the car and get a better look at our gorgeous surrounds.

Slipping and sliding all over the place, we held on to the car to keep steady enough to take a few photographs. By the time the bus managed to cross that stretch, all we could do was idle away in the car, taking the odd photo here and there.

Eventually, we reached Khardung la top (local people call it K-top or just 'top'). It was sheer joy to be at the top of the world's highest motorable road at 18,380 ft. We got out of the car and started clicking away as quickly as we could, knowing that spending too much time in that low-oxygen area would mean falling ill. We were there barely 10 minutes when it started snowing again accompanied by a biting wind. Amazingly, we found a couple of families who actually live there, probably paid by the BRO to look after their jawans and officers. It's all about habit I guess; where we could barely stay for 10 minutes, is home to those people! 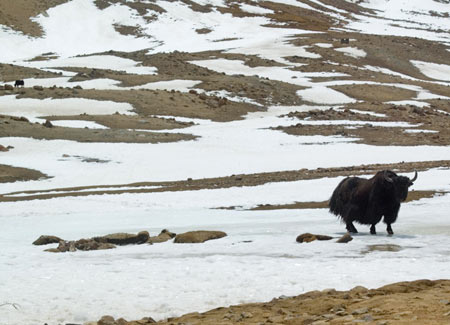 Image: The shy yak turned away from the cameras

We then began our steep descent to North Pullu. South Pullu-Khardung la-North Pullu these three points make a bell curve on this terrain. Due to lack of oxygen at the top, most of us felt breathless, which in turn made us drowsy. To break the dizziness and celebrate crossing K-top, we stopped at South Pullu.

It's the acclimatisation base camp for the Indian army personnel who are to be posted at Siachen glacier. There was only one restaurant (if you can call it that) open and they were serving hot mutton thukpa. The morning's watery Maggi was long gone by then and the thukpa worked its magic we were back in form in a matter of minutes. That's when our driver called to our attention a black animal making its way down the snow-clad mountain -- a yak.

Our lenses were ready in seconds. Those who had bigger lenses rushed to get them out from their kit to get the best close up shot. I don't think the yak had ever received that kind of attention before for it stared at us for some time trying to understand what exactly was happening and then slowly turned away.

Making our way to Diskit 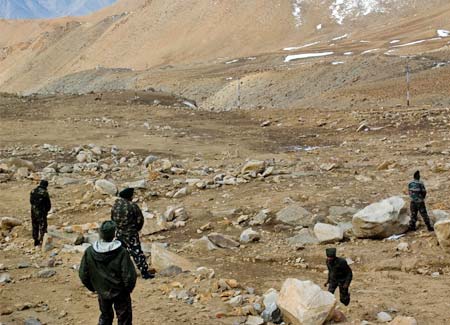 The drive from North Pullu to Diskit was a piece of cake compared to what we had faced earlier. The River Shey was our companion throughout. Along the route we crossed the Indian Army's supply point where we met Lt Col PK Chowdhury -- who's heading that point. A great gentleman, he treated us like family and told us about how the army is defending the borders on both the Pakistan and China sides.

As we entered Diskit at Nubra valley, the landscape changed to desert-like. The Diskit monastery is one of the oldest in Ladakh and is definitely worth a visit. Close by is a huge under-construction statue of Lord Buddha, work on which should be completed soon. 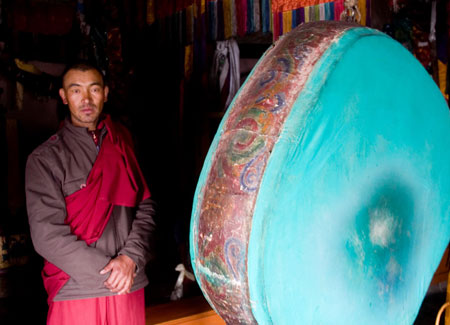 Image: The priest at Diskit Monastery

Just as we reached the monastery, we encountered a sandstorm and had the welcome excuse of meeting a priest there who told us about the monastery, it's culture and history. We got some exceptional shots as well and then headed towards Hunder village.

As we continued on our way through some of India's most beautiful and most dangerous terrain, made friends and listened to stories of the mountains and mists, in my mind our journey along the world's highest motorable road was by far the highlight of our trip.
More
Write a
Comment
Print this
article
ALSO
READ
MOST
RECENT