The Indian on top of the world 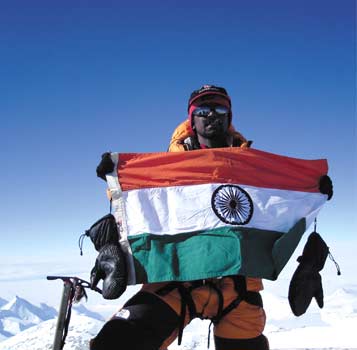 Besides being the only South Asian to accomplish the feat, Malli Mastan Babu, 35, holds the further distinction of being the first Indian ever on Mt Vinson Massif, Antarctica's tallest peak.

And in common with most of his adventures, he did it all by himself, with no one for company and for help.

The life and times of Malli Mastan Babu could inspire a bestseller or award-winning film. Born and raised in a farmer's family in Gandhi Jana Sangam village near Nellore, Andhra Pradesh, he was among the first few in his family to receive a formal education.

"My parents Malli Mastanaiah and Malli Subbamma are both uneducated but worked hard and made sacrifices to educate us children and provide opportunities that they were denied. I am proud of them," Babu says.

For a long time, Babu did not disappoint his parents. After Sainik School Korukonda (Andhra Pradesh), he did his BE (Electrical Engineering) from the National Institute of Technology, Jamshedpur, MTech (Electronics) from IIT-Kharagpur and a post-graduate diploma from IIM-Calcutta. He even worked as a software engineer for three years.

But then, his story took a radically different turn. In 2003, while his batch mates were busy negotiating better pay packages with prospective employers, Babu formed the IIM-Calcutta adventure club and organised trekking, skiing, rock climbing, rafting and Vipasana meditation courses in the western Himalayas.

By February 2005, he had climbed Mt Aconcagua in Argentina. And in 2006, he climbed Mt Everest, completing the dream journey of a distinguished alumnus of his Sainik School.

As an 11-year-old, Babu had stood awestruck before a statue of Lt M Uday Bhaskar Rao in his school. "My Everest ascent and journey was a pilgrimage and a tribute to Rao. He, along with five other army officers, was part of the 1985 Indian Army Everest Expedition. Rao died at an altitude above 26,000 ft on the flanks of Everest, also known as the Death Zone." 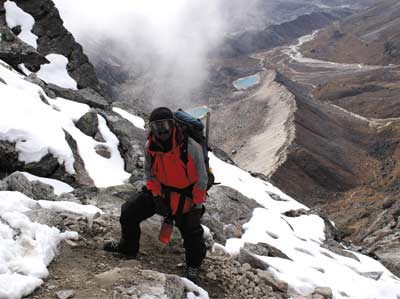 Image: Malli gets other climbers or his porter, on the rare occasions he takes one, to click his picture

Rao may have been his initial inspiration, but Babu is completely self-styled and self-motivated. He makes his own rules, and charts his own course up the mountains. Most of his expeditions have been unguided, and often accomplished at great risk.

A cursory look at his website, his blogs and his many expedition diaries reveal an analytical mind obsessed with detail -- skills probably picked up during his IIT-IIM grind, which can be lifesavers for a mountaineer as well.

"I believe that mountaineering/ trekking, adventure or any other travel is an education, and is incomplete without making notes of it. This aids introspection, which is the first step towards improving one's life -- be it attitude, approach, effectiveness or happiness," explains Babu.

He too has taken lessons "from the classic mountaineering and adventure books that expedition leaders maintained". Interestingly, though Babu maintains a detailed dairy, with photographs and notes, for every expedition, he has no video entries.

"I have taken some videos but not of mine. I have not posted any of my videos on the internet. Maybe I'll do it in the future," he says.

Babu's amazing journey is not just about a list of achievements, statistics, mountaineering terminology and jargon. Years of climbing across the world and interacting with climbers from different continents and cultures has left him with some fascinating stories about people and insights into human nature.

One such encounter was on his favorite -- and most challenging -- summit, the Everest.

"The difficulties were endless. The domestic airlines lost my baggage and climbing gear when I flew from Kathmandu to Lukla, the starting point of the Everest trek. The conditions forced me to plan my own schedule of acclimatisation and climbing. I was my own leader on the mountain, without sherpa support except for summit day. I slept alone at Camp Three, at 23,000 ft."

While he was resting before the summit attempt, he says, "Eleven sherpas of the BSF [Border Security Force] team attacked me." He says he is not sure what instigated the assault.

"None of their doctors, including the leader, made an effort to intervene, while I shouted for help. I was left to defend myself. The mental strain was more than the physical injury, but I tried to keep the incident away from my mind and focus on the summit push."

At the other end of the scale is the unexpected warmth a stranger extended to him in a different continent.

In February 2006, an exhausted Babu was on his third attempt on Aconcagua, Argentina. "I forced my way through the thigh-deep snows in the direction of a camp at 5,800 m, not following the circuitous, conventional route."

On the verge of collapsing, he stumbled into the camp. What he didn't know was that someone had seen him struggle down and had prepared for him a thermos with hot water.

"When I regained my senses, we exchanged introductions. She was Christaina Badias. She was guiding a handful of summiteers, and was surprised to see somebody from India attempt Aconcagua without any guided support," says Babu. "We still exchange emails." 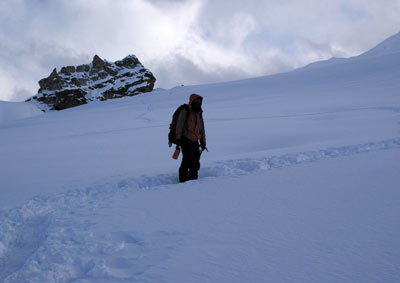 Babu seems to have a very high strike rate with hardly any failed attempts, despite traveling solo. But he says he is not fearless.

"Fear is a hint to be more careful and cautious. I experience fear of the physical injury that is possible if I slip over the steep ridges. Mostly, it made me more cautious and careful, rather than hold me back."

For him, fear combined with a certain magic element helps a mountaineer survive. He puts this as the "unexplainable feeling of intuition sometimes referred to as luck".

"I strongly believe the mountaineering community possesses a very a strong intuitive feeling that becomes true in several incidents," he says.

Though he has negotiated many a hazardous stretch, he counts the last few hours to the top of Everest and back as the "most dangerous moments" he has experienced in his life. "I was walking along the razor-sharp knife edge ridge of Everest above 27,000 ft. It was very hard to breathe, and I was only half conscious. As I inched myself up the mountain, I found it difficult to keep the snow goggles over my nose, as the oxygen mask kept knocking off my goggles, and I had difficulty finding the route."

He was unable to see the ground below, and could not gauge the terrain.

"I had to choose between walking without the much-needed goggles, or sliding off the mountain down 28,000 ft into the abyss. I opted to welcome snow-blindness.

"I walked alone to Base Camp after summiting Everest. Yes, there were other climbers on the mountain at the same time, but on Everest even a person who is a foot away from you is as far as being in another continent." 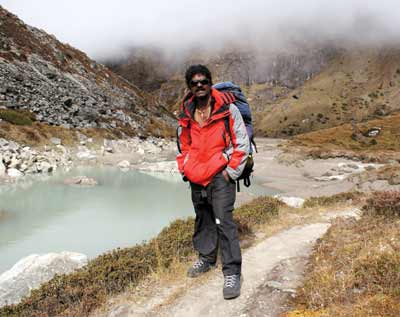 One of the most beautiful summits for Babu was the Vinson Massif in Antarctica.

"All the days I lived in Antarctica were like an experience from another planet. The perfect pyramid-like peaks rising above the horizon of white country was the sight I longed to enjoy eternally."

And though the sun was out for 24 hours, the light "cast beautiful hues in the sky that were beyond articulation.

"I experienced cold that could kill a person in minutes. I saw hot water thrown upwards turn to snow powder before hitting the ground, an amazing sight against the backdrop of azure skies. I also observed the curvature of the earth, and could cherish and appreciate the truth in the wisdom of our ancestors who predicted it."

Though he is a solo adventurer, Babu has had spirited support from his IIT-IIM friends, a handful of corporate sponsors (Lanco Group, Sriram Chitfunds and Sierra Atlantic) and his school, but state aid has so far remained elusive. And there have been no civil honours or recognition yet for a man who has hoisted the tricolor in places where no diplomat, media, political or cultural representative would have access to.

"My parents and family members are very proud of me, though they express deep concern for my having sacrificed a comfortable life. Their concerns grew into frustration with the lukewarm appreciation from the Chief Minister of Andhra Pradesh," he says bitterly.

In course of his adventures, he has seen the effects of global warming firsthand, as in the receding Gangotri glacier; observed the changing moods of the monsoons and encountered numerous physical, psychological and financial challenges. Yet, he says, "Mountaineering has helped me appreciate the value and beauty of life and the beautiful world we have inherited from Mother Earth. Mountains have humbled me and helped me gain the courage to face my fears."

For now, Malli Mastan Babu is at home, putting together a book on his Seven Summits, nodding indulgently at his mother's "periodic questions" between meditating, researching and planning his next adventure.

He also recently finished a mega marathon across India, covering 14 states in 14 days and more -- but that's another story, for another day.