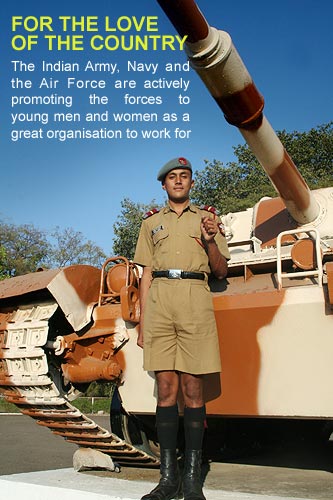 In a classroom, a group of young men, in crew-cuts, with number tags strapped to their chests are addressing each other by numbers. "201" one calls. The person wearing the number responds: he steps forward. This is a mock exercise explains 201. "We are practising for the Services Selection Board. There, at the SSB, you are called by numbers not names."

Number 201 is Shantanu Ghatak, an Economics student in Delhi School of Economics, Delhi University. Standing next to him is 573, well -- Ashutosh Tiwari, a social worker from Allahabad who has come to Delhi for a week to prepare for the SSB.

"It is my dream to join the Indian Army, to serve the country."

Surely, this year there's more enthusiasm for the armed forces amongst the youth. The applications for the Combined Defence Services Examination (CDSE) are still on their way (the closing date was May 25) but the officials are optimistic.

The Armed Forces is giving pay slips not pink slips! 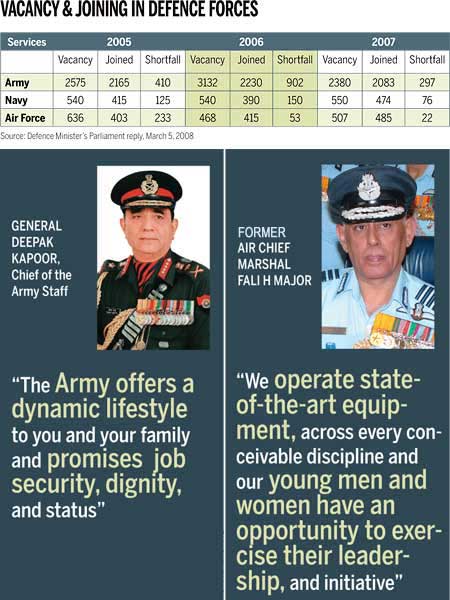 The rise in the number of applications is good news for the forces as for the last few years there has been a shortfall in the recruitments into the Army, Navy and the Air Forces (see adjacent table).

Although there have been movies such as Farhan Akhtar's Lakshya showing life in the Army; even the Indian Navy collaborated with the National Geographic Channel (NGC) to launch Mission Navy: Lehron Ke Sartaj where close to 50,000 civilians from all over the country applied, not many people were still joining the armed forces.

To woo young men and women who are opting for lucrative jobs in the private sector, the government is considering a proposal of the three services for making Short Service Commission (SSC) entries more attractive.

In this regard measures being considered include payment of lump sum amount of Rs 1 lakh per annum for the first 10 years of service and Rs 2 lakh per annum for up to 14 years. There is also provision of study leave of two years to those SSC officers who have not undergone Post Graduation while in service.

Besides, there will be concessions for appearing in the Civil Services Examinations such as reduction in number of papers from nine to seven and age relaxation of 10 years for SSC officers to compete. 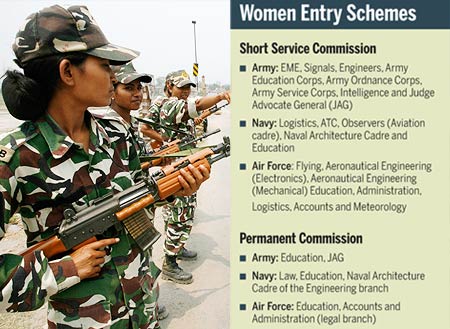 To make up for the shortfall, the armed forces are encouraging women to join the services. Till now, eligible women were being recruited as Short Service Commission officers but now SSC women officers can apply for Permanent Commission (PC).

This option is open for SSC women officers in Education and Judge Advocate General (JAG) in the Army; Law, Education and Naval Architecture in the Navy and Education, Accounts and Administration (legal branch) in the Air Force. But this scheme is applicable to those who joined after September 2008.

Forces reach out to the youth The Army, Navy and the Air Force together have taken up several initiatives to pitch the armed forces as a great organisation to work for.

Entry routes into the Armed Forces

From Mt Everest to the IIMs, the Forces have it all

Senior Officers are hoping that with these measures young men and women will get excited about careers in the armed forces. "The truth is that no organisation can match the facilities provided by the forces," says Col Gill.