Bali: Island of the Gods 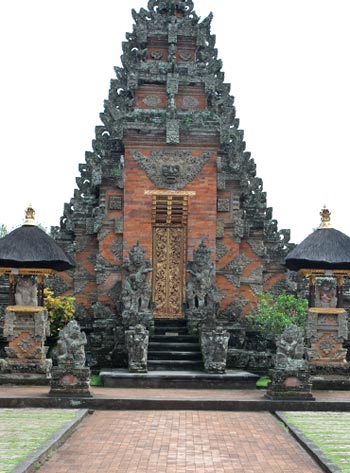 The more I read about Bali, the more convinced I was that a trip to this Indonesian island would be a memorable one. Pictures on different portals about Bali finally convinced me to spring for a digital SLR camera, something I had been planning to buy for a very long time. And the best part was that it was going to be my honeymoon destination!

We landed at Denpasar airport, admiring glimpses of the tropical greenery all around. The beautiful sight of neatly designed structures on both sides of the airport corridors was so refreshing that we actually kind of enjoyed filling out the forms to declare that we were not suffering from swine flu.

At that moment I hoped that all of Bali would be as pretty and pleasant as our first few minutes there. The next few days we spent there completely convinced us of the fact that Bali is indeed an amazing place to visit.

The island is all about nature, the arts, culture and history. You can experience summer, monsoon and winter all in a single day at various exotic locations. Ninety-five per cent of Balinese are Hindus (and they're not shy to say so!) and the ambience everywhere -- the temples, the gardens, scenic locations, the people and the things they do -- reminds you of India. 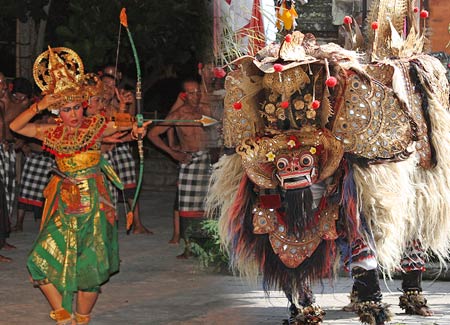 The Barong dance is a play that portrays a story from the Mahabharata where Sahadeva achieved immortality, a story less known to Indians. The Barong is a mythological animal, powerful yet kind, who helps Sahadeva fight the Rangda, an evil witch. The traditional stage, costumes and the melodious orchestra, called gamelan, make it quite an experience. Thanks to the handouts that we received at the beginning of the show, we were able to figure out the characters and follow the story. The Balinese dialogues would simply have been bouncers without them.

One of the acts -- Kechak -- is based on the Ramayana. The story starts with Rama's vanavasa (exile) and ends with the celebration of Ravana's defeat. The speciality of this act is that is has no orchestra. Instead, about 50 men dressed in traditional lungis called sarongs, act as the backdrop and hum 'chak, chak,chak kechak' all the while; their rhythm setting the tempo for the scenes. This better-known story became even more enjoyable when Ravana suddenly started wooing Sita in English in an otherwise totally Balinese act. 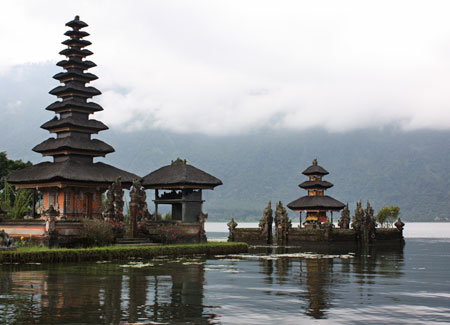 The average Balinese is quite religious. Every family has a certain portion of the house reserved for the temple. Depending on how big and affluent the family is the size and affluence of the temple is defined. Most temples or Puras as they are called in Balinese are built to worship Brahma, Vishnu or Maheshvar -- the Trinity.

There are a few temples that do not belong to any family but were built by monks who travelled to Bali from distant lands. There are also temples that were built by kings of the different provinces. Here the royal family could not just worship the Almighty but also spend some quality time in the scenic surroundings of the temple that include man-made rivers and breath-taking, well-manicured gardens spread over acres and acres of fertile land.

All temples have strict rules and regulations of their own. Most do not allow tourists to enter unless they wear a sarong, a local piece of cloth to cover your legs. You cannot see the statue of the Almighty as it is kept in an enclosed room, which is displayed on the intricately decorated shrine only during temple festivals. However, you can watch the priests performing various rituals, people praying, offering traditionally cooked food to the heart of the Balinese faith -- the Trinity. 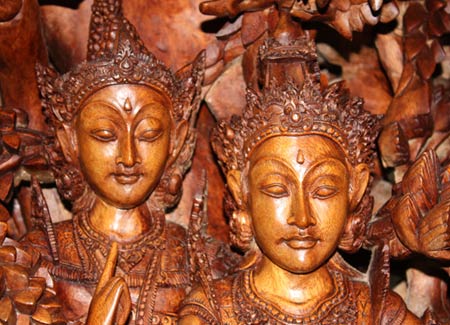 In Bali, the arts have flourished over the centuries, and with two of the greatest epics as inspiration, depicted in stone and wood, it has reached great heights. There won't exist a temple in Bali without artistic architecture and beautifully carved sculptures.

We also visited a few factories where they make the stones or wood almost sing the stories. The intricacy, the perfection, the expressions all make you fall in love with the sculptures.

While we wondered if we could take a few carvings home, the weight of those great statues and the money we'd need to pay as extra baggage cost deterred us. Also, the average cost of any statue that we liked was quite a tidy sum. 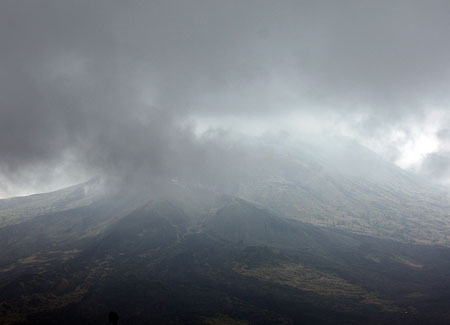 You can experience marvellous beaches, wonderful rice plains, misty mountains, thick forests and the various moods of the tropical monsoon all over Bali. There are a few live volcanic mountains as well, of which we visited Kintamani.

The weather turned cold as we drove up the mountain facing Kintamani. Just as we started enjoying the weather (a welcome relief to the tropical humidity) we caught a breathtaking view of Kintamani, fuming with the heat of the volcano within. It took me a few moments to regain my senses enough to capture the sight on my camera but thick clouds had already started enveloping the peak and I missed the picture perfect.

Another location that deserves mention is the Gitgit waterfall. The name did nothing to impress us as we picked the locations for our very non-touristy travel programme. Our uncertainty continued even as our guide stopped the car at the edge of a jungle that covered almost all of a tall mountain. After we walked about 500 meters into the jungle though, what we saw of Gitgit -- a twin waterfall -- was simply magical. 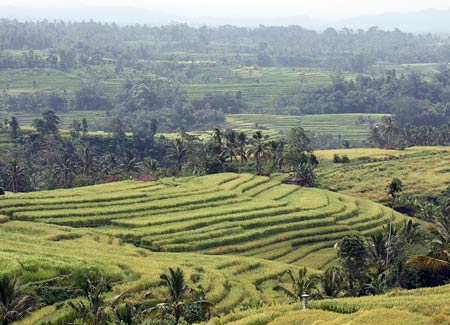 Thanks to the abundant tropical rain, Bali produces tons and tons of rice and that too twice a year. In one of our unconventional tours, we chose to drive through the paddy fields. Making our way through Jatiluwi, situated on the slopes of the mountains and covered with the lush green of paddy, was pure pleasure.

There is much variety of plantations all over Bali. You name the fruit and it can be easily found in any local market. We were so tempted by the variety, that one day we just bought a lot of them and had a fresh, juicy fruit-lunch.

Being vegetarians, the local cuisine did not offer us a very wide choice, but the dishes we did try were delicious. The varieties of rice in sweet, spicy and sour avatars, and honey-drizzled fried bananas served with vanilla ice-cream were just heavenly. 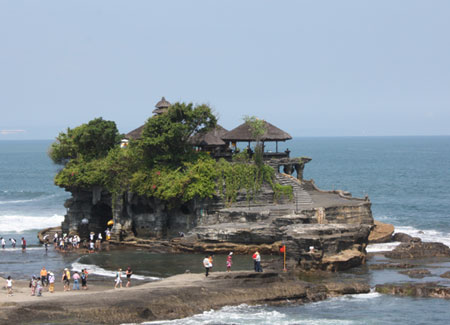 Of all the places we visited in Bali, the place that deserves special mention is Tanah Lot. Situated in Tabanan district, this amazing temple is located about 50 steps away from the beach, in the sea! There probably existed a huge rock in the sea that was spotted by a monk travelling from the west who thought of carving into a marvellous temple. A surprise lay in store for him though, in the form of sweet water springs at the bottom of the rock, right there in the middle of the sea. At any hour of the day, the sun and the sea play their magic to make that temple look simply divine. When the sun is about to set though, something happens to make it look just like heaven.

The places, the nature, the rains, the people, the temples, the art, the history -- mix them all and you get Bali. What more can I say except, you must visit Bali whenever you get the chance.