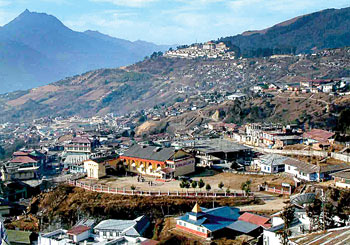 Image: Tawang town is situated 10,000 feet above sea level and has a population of just 40,000 .
Photographs: Trans World Features

As China ramps up its objection to the Dalai Lama's upcoming visit to the Tawang monastery, Ranjita Biswas is moved to nostalgia.

1962: The year is forever etched in the memory of people of the North East.

This was the year when the Chinese soldiers came down from across the border via Arunachal Pradesh, almost unhindered, until international pressure brokered a ceasefire. Had it not been so, history might have written otherwise. They were near Bomdila, just 165 km from Tezpur in the fertile Brahmaputra valley.

This was also a definitive year when the idealism of Hindi Chini Bhai Bhai got a beating. The 'Himalayan Blunder' broke the spirit of Jawaharlal Nehru, and political commentators and biographers say that he never recovered from the blow. Defence minister V K Krishna Menon, who propped up the idea that there was no need to defend the northern borders, also had to bite the dust.

Now, as the India-China border 'situation' again heats up and charges and counter charges fly across the border at Arunachal Pradesh, with the Chinese objecting to the prime minister's visit prior to the recent election in the state and the Dalai Lama's intended visit to Tawang in November, there is certain sense of d j vu for me.

I remember the tension in our house in Shillong in the autumn of '62. Indian soldiers were caught off-guard and they were ill-equipped to counter the attack. Meanwhile, Chinese soldiers were hovering around Bomdila. My grandmother was alone, though there were good neighbours, in our ancestral house in Tezpur. We learnt that Tezpur was ordered to be evacuated. My father made a dash to the plains to fetch my grandmother.

There was no bridge over the Brahmaputra then; in fact the first one to the north bank in Amingaon side was built only after this experience, as soldiers had to be 'ferried' to the north bank to tackle the Chinese.

Famous for its Golden Pagoda, Tawang has only recently caught the tourists' attention 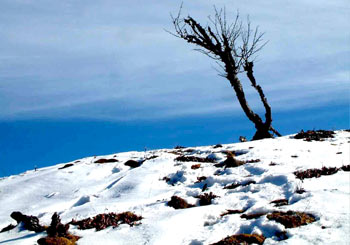 By the time my father arrived in Tezpur by a ferry via Silghat (where there is the second bridge, Kaliabhomora, now) he encountered an eerie town. People had left in a hurry, not even bothering to lock the doors. The streets were empty; the treasury was deserted. We heard later that the coins and valuables were thrown in 'Padum Pukhuri' (lotus pond) at the centre of the town. Anyway, my father found that my grandmother had already left for the south bank accompanied by neighbours. Much-relieved, he again crossed over to the south bank, but was now wondering where she was in Nowgong, the nearest town. Eventually she was traced to the home of one of our aunts.

All these memories flooded my mind when I travelled to Tawang on a bitter winter day sometime back. Famous for its Golden Pagoda, Tawang has only recently caught the tourists' attention -- but for the people of North East, Tawang is significant as a place where the Chinese had made their home for a long time while preparing the 1962 war.

Skirting the river Jia-Bharali (which is called Kameng upstream) as we drove up, names like Bomdila, halfway to Tawang, the beautiful Dirang Valley, Bumla Pass and the ever-windy Sela Pass at 14,000 ft all brought those long-lost memories of the Sino-India fracas. Our driver, a local Arunachali, was an expert at driving through this difficult terrain, and his favourite pastime seemed to be listening to Hindi songs. But at such heights, when he drove with one hand on the steering wheel while changing cassettes at regular intervals with the other, my love for music took a backseat.

The Chinese still claim that Tawang belongs to China. Beijing in any case believes that around 90,000 square kilometres of Arunachal Pradesh is a part of south Tibet, and hence belongs to China. Tawang, by the way, was under the Tibetan government even after Independence, till 1951 when the Indian army took over.

China's crackdown on protesting Tibetans made the spiritual leader the Dalai Lama leave the country in 1959. 'He left Lhasa on March 17 with an entourage of 20 men, including six Cabinet ministers,' reported the BBC on March 31, 1959 while describing how after a difficult journey mostly by night, 'he finally crossed the Indian border at the Khenzimana Pass, and is now resting at the Towang [Tawang] monastery, 50 miles inside the Indian border.'

Tawang's 400 years old Galden Namgey Lhatse (celestial paradise) monastery, more popularly known at the Golden Pagoda, thus holds an important place in the history of the journey of the exiled Dalai Lama to India, as well as for the local Arunachalis mainly belonging to the Monpa tribe, a good-looking tribe of Mongoloid origin who follow Tibetan Buddhism. The monastery belongs to the Galukpa sect of Mahayana Buddhism of which the Dalai Lama is the supreme head (though the Chinese dispute it). 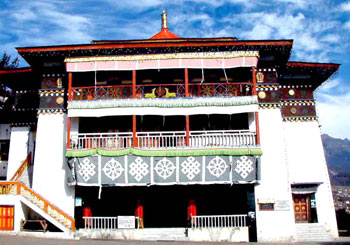 Image: The Galden Namgey Lhatse monastery was built at the behest of the 5th Dalai Lama in the 17th century

As visitors were almost nil in that chilly period in end December, the monk- in-charge had ample time to show us around. The monastery looks like a fort from afar, and can house more than 700 monks. There is an interesting anecdote around the name: in local parlance, it denotes 'founded by the horse' (Ta= horse: Wang= chosen).

As the story goes, following the wishes of the 5th Dalai Lama, Merak Lama, a monk set out in 1681 searching for a place to construct a monastery. Unsure where and how he would find the right place, he prayed for divine guidance. One day, after prayers in a cave, he found his horse standing quietly at a spot on a hill-top. Merak Lama took it as a divine sign and selected it as the site -- and that is where the Tawang monastery stands today. The local Monpa tribe helped him build the monastery; even today they are responsible for looking after the pagoda. The 6th Dalai Lama was born here. The huge monastery is a complex of many buildings -- dormitories, meeting hall, school for would-be lamas, community kitchen, monuments etc and of course, Dukkang -- the temple.

Inside the temple there is a huge 30 ft gilded Buddha made of wood. Priceless tankhas (scroll-paintings) hang from the walls while butter lamps spread a warm glow. Tibetan-style carpets with dragons keep the floor cosy and colourful. Our priest-guide informed us that the whole structure was built by wood brought from Tibet, piece by piece, on horseback and assembled here under strict guidance. He also showed us around the museum attached to the main hall, with its complement of ancient manuscripts that are invaluable for researchers. These and the artefacts showcase the centuries-old India-Tibet Buddhist trail.

As the Asian giants reportedly build up their forces on the borders following recent spats, I remember our driver pausing in the middle of whistling along with a Kishore Kumar ditty and saying, "China? Why China? We are Indians!"