Postcards from Ladakh is a pictorial travelogue on Ladakh written by Ajay Jain, a full time writer, journalist and photographer. The book is intended to give readers a flavour of what Ladakh truly is based on his 10,000 km journey across the region.

Jispa: The mood kicks in

This is it. The edge of heaven. As far as oases go, Jispa's tough to beat. A recommended night halt before Ladakh, it's just the place where the mood kicks in.

It's the last green spot -- with trees, flowers and wheat fields -- till you hit Leh. Jispa lies at 10,890 feet on the bank of the Bhaga, whose waters lull you to sleep at night. Mudhouses and chortens complement the serenescape.

It's quiet. Very quiet. Except for the rumble of passing tankers and trucks ferrying supplies to Ladakhis and the Army. You'd think the locals are introverts, barely seen except in the mornings when they reach the communal taps to brush their teeth and wash their utensils. Or to stroll and ruminate like the cows leading them -- at least like the three men I saw.

I spotted some boarding a bus to Keylong. A sign inside asked passengers on seats 1 to 3 not to sleep lest they make the driver drowsy. Some women were shopping at a grocery store run by 'ex-man' Karam Singh; methinks the sign should read 'ex-serviceman'.

Jispa can be a destination in itself for travellers. Pity it's inaccessible eight months of the year.

Excerpted from Postcards from Ladakh (Rs 395) by Ajay Jain with permission.

Granny off to make roads 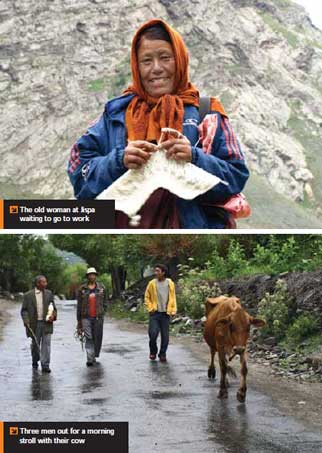 One earning member usually feeds an entire family in rural India. It could even be the grandmother. Like the one I met by the highway in Jispa.

Knitting and smiling away, she sat waiting for other villagers. Together, they would go make the roads that travellers like me drive on. She was probably a beneficiary of the government's rural employment guarantee programme. But how much work could her ageing body put in?

Some locals work as daily wagers like her, she said, though Jispa's chief occupation is agriculture. Its main crops are potato (sold in the mandi or wholesale market) and peas (sold locally). During the harsh winter, villagers knit woollens and weave carpets but mostly for their own use.

She pointed to a local school, an impressive building. No student or teacher plays truant here, a major achievement in India. A board highlighted targets of the government's Sarva Shiksha Abhiyan (education for all) programme: By 2003, all children to be enrolled in school. By 2010, all children to study till the eighth grade. Seems Jispa is well on course to achieve these milestones.

Granny posed for some pictures. Then, a cheerful wave and she was off to make roads... 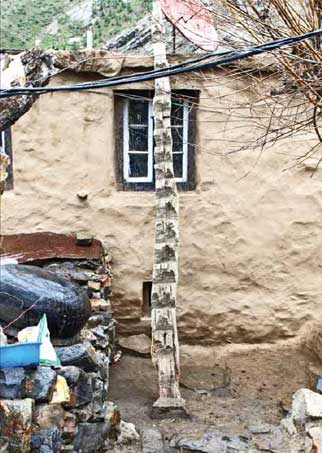 For those who believe in an afterlife, the aspiration is always to go to heaven. And every faith shows you a way to reach it.
Buddhism too has its prescriptions. Climbing steps is one. Not those in your house but the ones crafted especially for the purpose.

The first I saw of these was in Jispa, resting against a mudhouse and leading to the roof. Cut into a log of wood, the rungs were much smaller than most adult feet. And the design, evidently a local one, didn't include any climbing support. How does one climb without support, especially when carrying something?

A guide enlightened me when I next saw a similar contraption at the Alchi gompa. If anyone can mount these steps all the way to the top without support, said he, that person bags himself a heavenly spot in the afterlife. It is certainly not a simple task. With my big feet and the pending long drive, I dared not take the challenge lest I took a tumble!

The migratory entrepreneurs of the Himalayas 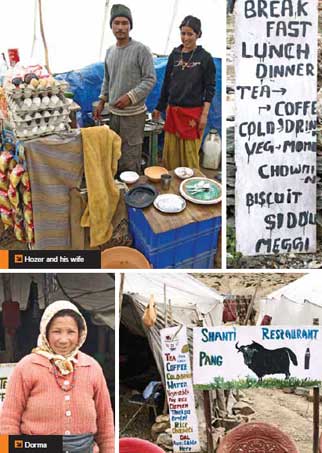 Here's a lesson in entrepreneurship you won't learn at Harvard.

Hozer runs a makeshift cafe at Deepak Tal, 23 km ahead of Jispa. The menu offers 'veg momo', 'chowmin', 'Meggi' (actually Maggi instant noodles), cold drinks, tea, coffee besides meals. Hikers, bikers and cyclists can also rent beds here for the night for Rs 50-200. Indians pay less, foreigners more. And a dollar gets you a spin on the lake in a bright yellow boat.

Dorma has an enterprising streak too. She singlehandedly runs Shanti Cafe in windy, dusty Pang. She served me excellent cardamom tea and beans with rice. Her husband is an armyman, posted on a glacier near Khardung-La. Her daughter, 13, lives in Leh with her sister. Her son, 19, studies in the eleventh grade in Delhi, aspiring to become a policeman. The family gets together once a year.

Ladakh is dotted with such itinerant entrepreneurs. They set up cafes in the four summer months and return to their villages in winter, having earned enough to pay their bills all year round. Dorma earns Rs 30,000-50,000 in a season.

But for the food and shelter they offer, many an adventure traveller wouldn't be seen in Ladakh.

All in the right spirit(s) 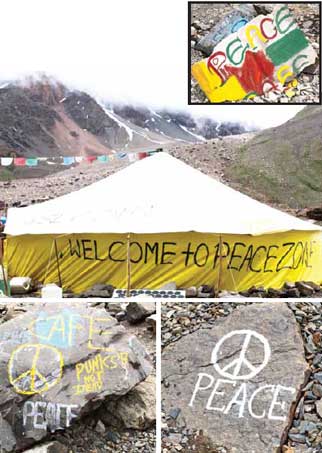 Would you go to Zing Zing Bar looking for peace?

Many backpackers, especially from the West, certainly do. At ZZB, 34 km from Jispa, they stop by to roll joints and get high. How much higher do they want to go than the 14,000 feet they're already at? Some creative ones have even painted peace signs on rocks, and named a local eating joint Peace Cafe. Amen to that.

Drive beyond Sarchu, and there's more high-spirited branding. First up is Twing Twing Bridge, which was being repaired when I crossed, delaying my journey by an hour. Two jollier ones follow: Brandy Bridge and Whisky Bridge. A toast to the Border Roads Organisation's imagination.

These names seem a little out of place though, what with the BRO itself having posted road signs like 'After Whisky, Driving is Risky' and 'Drive on Horse Power, not Rum Power'. Then again, an Army mess at a camp in Ladakh is also called Zing Zing Bar. Will this bring peace to India's borders? One hopes so.

Till then, look around. Ladakh's landscape is all you need to keep your spirits up.
More