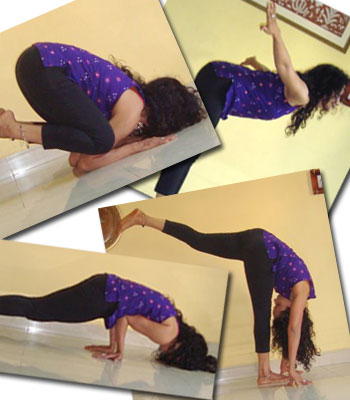 Yoga is replete with poses named after animals and birds. These poses were named so because their execution simulates the movement or posture of the creature. More importantly, the poses also recreate the strength particular to each creature.

The bird poses in yoga are special for creating a state of lightness in the body, pure balance against the drag of gravity, and elegance in its practitioner.

Bird poses lay particular stress on using one's limbs for simulating a state of flight. This involves the larger muscles, making them lithe, creating a state of extreme lightness. Similar to the way birds enjoy balance and complete control while in the air, these poses help centre oneself against the drag of gravity. This in turn tweaks the parts of the brain involved with balance, primitive sections that actually are emotional centres, like the cerebellum. This helps the practitioner gain a poised state of inner control and harmony.

Some bird poses like the swan pose and the duck pose are tough on the arms and wrists, rewiring them to gain iron-strength. This in turns gives great power to the upper body, making the body light by taking the load off the over-burdened lower spine.

Here, Shameem Akthar, yoga acharya, trained with the Sivananda Vedanta Yoga Center, demonstrates five bird poses from yoga which will liven up your practice and lighten your body and mind.

(This column only seeks to share the author's enthusiasm towards yoga. Yoga is best learnt under expert guidance.) 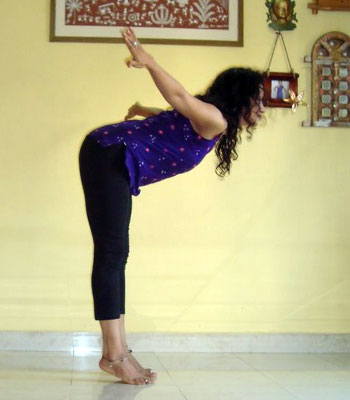 Stand up straight with your feet together. Spread your arms out, at shoulder level, palms facing backwards. Inhale. Exhaling, lean forward. Simultaneously, go up on your toes, as high as you comfortably can. Hold the pose, adjusting and bending forward more. Breathe normally throughout. Relax. Repeat a few times. 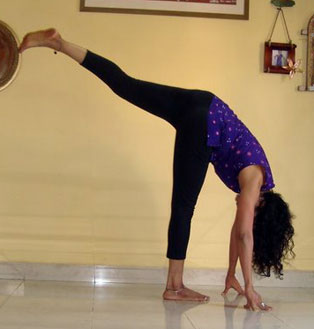 Stand up straight and spread your legs. Point your right foot in front. Bend right leg at knee. Place both your hands on either side of your right foot. Inhale and lift your left leg ensuring it remains straight. Straighten your right leg. Look at a spot on the ground to maintain focus and balance. Hold for a few breaths. Release and repeat for your left leg. 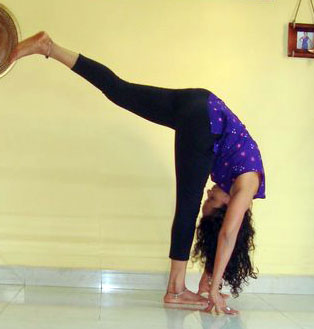 Stand up straight and spread out your legs. Point right foot in front and bend at the knee. Place both hands on either side of your right foot. Inhale and lift your left leg up ensuring it remains straight. Straighten your right leg. Look at a spot on the ground to maintain focus and balance. Hold for a few breaths.

Now walk your hands towards the right foot, so that the head moves closer to your right knee. This extends the stretch further, plus challenges your balance more powerfully. Release and repeat for your left leg.

Benefits: Same as above, more enhanced. 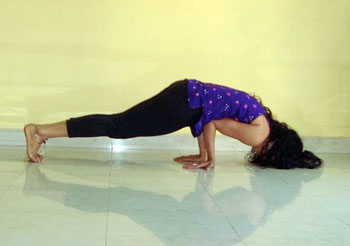 Sit in the vajrasana or thunderbolt pose, on your heels, spreading knees apart. Bend your hands at the elbow. Let your fingers point backwards, towards your stomach. Place both your palms on the ground and lean forward. Place your stomach on your elbows, as shown. Stretch out your legs, one at a time, behind you.

Lower your head to the ground and hold the pose.

Avoid: If having loose pelvic tone, have uterus prolapse, weak wrists, heart or blood pressure problems. This is an advanced pose and may only be attempted by those with regular practice of intermediate level. 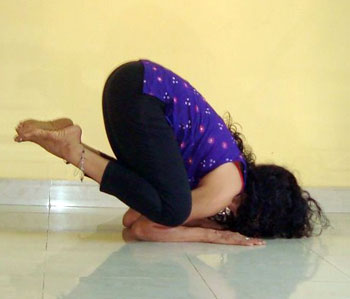 Squat on the ground with your feet flat. Place your hands and lower arms on the ground, keeping your fingers pointed out in front. Tilt your body onto the front shin (of each leg) on the upper hand (of each arm). Hold the pose for a few breaths initially. Your face should be a few inches from the floor. Keep looking ahead.

You can extend the duration once you gain confidence and stamina.

Avoid: If having uterus prolapse, weak wrists, heart or high blood pressure problems. This is an advanced pose and may only be attempted by those with a regular practice of intermediate level.