Well, so now you know what the most common reaction was. There were probably those who wondered why anyone in their sane mind would go to a naxal-prone area and one of the hottest regions in India in the peak of summer, but said nothing and smiled politely. But going to Chhattisgarh was one of the wise decisions I made. The place totally bowled us over and how!

Here are some fun facts, for starters: 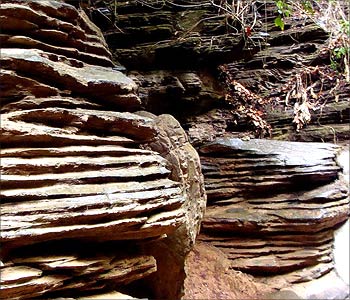 Image: Chhattisgarh is full of surprises

Chhattisgarh, it seems, is India's best kept secret. The place has so much potential you'll be surprised how little most people really know about it. Maybe that's a good thing, maybe it's not. The catchphrase 'Chhattisgarh -- Full of Surprises' is totally apt and describes exactly what you experience there.

Gaining statehood in the year 2000 under the Congress regime, then-chief minister Ajit Jogi wanted to surprise the world with the totally obscure treasure that is Chhattisgarh. And who better to execute his plan than the very same person who catapulted Kerala Tourism to international fame and visibility -- A Jaya Thilak. The quest started then to attract visitors to Chhattisgarh and as they say, work well begun is half-done. This explains the wonderful roads in the state. The infrastructure is surprisingly advanced for a state which is still not a popular tourist destination (yet). Apparently, Rs 1200 crore was spent for this purpose -- and it shows. All our drives were delightfully smooth. Image: Chhattisgarh is an amazing treasurehouse of age-old tribal culture and history

We were on a week-long trip covering Visakhapatnam, Araku and Jagdalpur (Chhattisgarh). It was 5 o'clock in the evening when we reached Jagdalpur's main junction, trying to negotiate with the jeep drivers to take us to our destination, a resort developed by the tourism board right in front of Chitrakot Falls, 40 kilometres from the city. Rs 250 secured us the front and middle seats in a jeep -- the back seats were occupied by locals.

So the five of us and the five of them crammed in and we started our journey on the perfect roads towards Chitrakot. And we noticed something amusing on our way -- every 10 to 20 minutes a local would stop the jeep and would get in the backseat! It was like there was a huge invisible space in the back. One after the other, people kept cramming themselves in and all in the back! Young women, old women, young men, old men, children -- every kind was in the jeep by the end of it. The journey to Chitrakot was pretty smooth, as the sun set over the distant horizon. Soon we arrived at our destination -- Chitrakot Resort, built right in front of the falls. 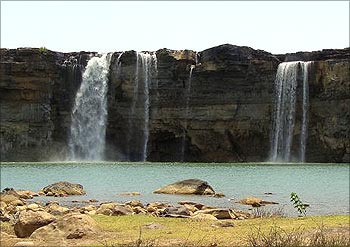 Image: Chitrakot Falls is comparable to the Niagara Falls during the monsoons

This magnificent horseshoe-shaped cataract is at a distance of 40 kilometres from Jagdalpur. It is one of India's biggest waterfalls, comparable to the Niagara Falls during the monsoons.

These falls form on the Indravati River, which abruptly takes a 100-foot drop. During the dry season, the base of the cataract is a hotspot for fishing, as all the fish swimming upstream hit the rock barrier. The best thing about these falls is that the cataract is accessible from the top as well as the bottom.

The falls are illuminated after night falls and it is quite a view from the resorts. The privilege of staying in such close proximity to the falls is that you get absolutely amazing vistas of the sunset and sunrise over the falls. Early morning, by 6 am, I was up and running to catch a glimpse of the golden rays cascading down the falls. The place was teeming with early morning activity -- fishermen catching fish and their illuminated nets, early morning visitors making their presence felt with all the fluttering and chirping.

It was a pretty idyllic scene -- watching the sun rise in such a pristine environment surrounded by nature and only nature. After some peaceful moments, I went up and I was back again a couple of hours later, this time with my family. It was 11 am and by now fishing took a backseat -- there was noone around except for an old man in a boat. So we went for a boatride and he took us real close to the falls, where one can actually comprehend their colossal proportions. I was very disappointed that there was no one fishing, because I had a certain concept in mind for what could have been an awesome photograph. But later I got lucky with a group of fishermen. I had my shot and loved it! A couple of photo shoots more and then we headed up to the top of the falls. It is amazing that you can get to the point from where the water plummets down, stand right next to it and possibly contemplate jumping right in to see what could happen. I might sound like I am suicidal, but I'm really not -- it was just that inviting. 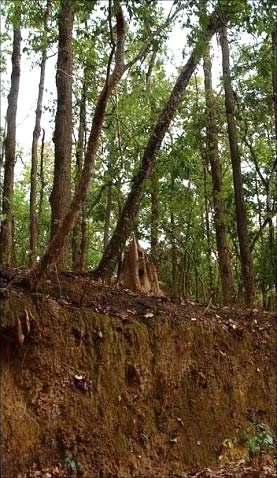 Now the first thing that strikes you once you enter the Chhattisgarh territory is the really green, tall trees lined up everywhere. Being from the South, I found these very unusual and pleasant too.

These trees, as I later found out, were Sal trees belonging to the deciduous forest type native to Chhattisgarh. The forests of Kanger Valley, it is said, have the distinction of being virgin forests, which means they are also the oldest forests, with a unique biodiversity -- very tall trees, thick canopies high above your head where the sunlight can't penetrate, thick undergrowth and the calls of its inhabitants, of course.

Although the forest is teeming with wildlife, do not expect a wild encounter. The government is still in the process of organising safaris here and right now no such facility exists. The areas we visit were abuzz with human activity and are on the fringes of the real jungle. So keep that in mind. Do not go there expecting to see the tiger and then be disappointed that in the bargain you missed all the beauty around you. Now you may ask why I would suggest you visit the jungle at all?! Well, the answer is to see the very old Kutumsar and Kailash caves and the very beautiful Tirathgarh Falls nestled in the heart of Kanger Valley National Park. While we were waiting for our guide at the caves, it started raining. It was a wonderful feeling to experience the rain in such beautiful and natural surroundings. 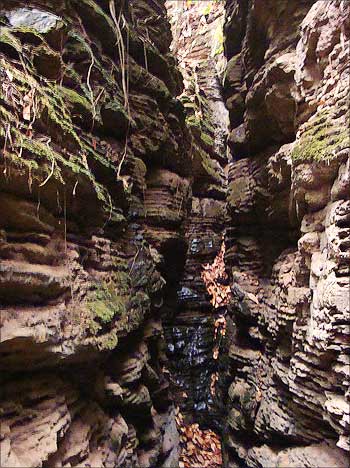 Image: The Kutumsar Caves are located in the Kanger Valley National Park

These 330 metre-long caves have formed over many years, which led to beautiful stalactite and stalagmite formations inside. There is absolutely no light entering these caves and a particular species called blind fish have evolved here over the years to become totally independent of sunlight. At the forest checkpost, a guide with a solar torch is provided for the caves, as they cannot be entered otherwise.

The entrance to the caves was all I could see, because we were late and all the guides had left by then. But the entrance itself was so enthralling to me! The layered rocks looked very beautiful and the cherry on top was the rain...yes, it rained while I was deep in the forest. Since I am not a big fan of stalactites and stalagmites, I wasn't too disappointed. But if you like exploring caves, this is the place to be!

The best part about these caves was that they still look like the natural caves they are -- dark, damp, scary, unexplored and unadulterated! No artificial lighting, no sign boards and no humans. A narrow and steep staircase extends to the bottom of the cave and it can get quite steep at times. The caves in this forest are closed during the rainy season and are open only till 4 pm during the rest of the year. 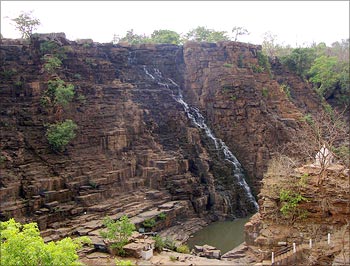 Tirathgarh Falls is a very popular picnic spot among the locals. The striking thing here again are the layered rock formations and cascading waters. Water hops over the layered rocks from a height of 300 feet, creating a spectacle. You can go down to the base of the falls using the steps. Also, there is a small mass of land in the middle which holds small temples and the views are brilliant from here. These falls can also be accessed via a natural trail for those interested in hiking, if the road doesn't seem interesting. Again, since I went in the burning summer, the falls were pretty dried up.

Would you like to share your travel experiences with us? Email us at getahead@rediff.co.in (subject line: 'Travelogue') with your experiences and photographs. The most interesting accounts will be published right here on rediff.com