Travel: A journey to uplift your spirit 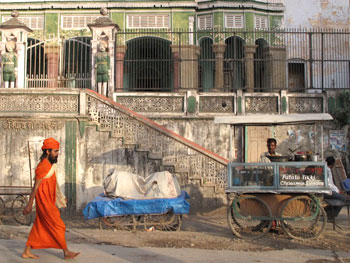 Charlotte Purin on a mid-life 'awakening' in Rishikesh.

Rishikesh is a town of seers (rishis) known for its holy men, the sacred river Ganga, and its sylvan Himalayan mountain ranges. But its reputation as the yoga capital of the world is what drew me to it.

To most Westerners yoga is only a physical exercise. But to seekers Rishikesh's ashrams are more important. I visited as a seeker, hoping to find guidance with my 'mid-life awakening', known in the west as a 'mid-life crisis'.

I was anxious about my first trip to India. I had heard stories about its crushing crowds, dysentery, malaria, and toilets. I wasn't 100 percent healed from a recently-done complex surgery and these issues were of concern to me.

But other stories of India were stronger: that in its holy cities, like Rishikesh, lived open-minded swamis and gurus who had spent their lives studying spiritual phenomena and scriptures. They were the people I hoped would be able to give me some life direction. In a city that was built on yoga, I found myself surrounded by like-minded people, each having something valuable to say.

When I arrived in Rishikesh I was alone, except for a few cows and millions of stars that were not visible back home in Los Angeles. My ashram, Sri Ved Niketan Dham, was at the end of a dirt road that was lined with sleeping babas. 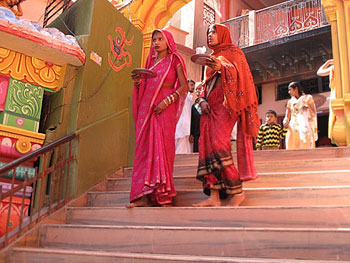 Image: A scene at the Neekanth Mahadev temple in Rishikesh

Early the next morning I was awakened by mantra chants and bells. After meditation I was nervous about meeting my first swami, Swami Dharmananda. He graduated from school in science and after a brief tenure in the army took a premature retirement, heeding the 'soul call' as they say in India. Then he came to Rishikesh where he has spent the last 24 years instructing foreign seekers.

I had no idea how to greet him or what to expect. After our introduction, I sat frozen until he laughed. Then he seriously asked, "Why are you here?"

This was the first indication of his sincere desire to answer questions that I didn't even know I had, and to impart his wisdom through lectures and storytelling.

"Why are you here?" sounds like an inane question. But it is not when it is asked by someone who feels that they have a duty (dharma) to instruct you.

What I remember most clearly from him is his instruction for me to surrender -- to learn to surrender to that higher intelligence which is guiding the universe and your life. There is a Divine Plan he said. Listen to your intuition. We generally act from our ego which is limited in understanding. Behind the ego is the soul, the perfect, the God in us. It is to this soul, which is our own higher Selfn -- we must surrender to it. "Meditate and ask for guidance. Say I am ready to learn, please teach me. Did this never occur to you?" he asked. No, it had not.

At the time of my visit, ownership of the ashram was in dispute. Its founder, H H Yoga Samrat Shri Vishwaguruji Maharaj Mahamandaleshwar, was given this title for his mastery of the asanas. For over 30 years he was assisted by a lady disciple Swami Divyananda Saraswati. Before his death the guru named her as the heir of the ashram. A group of trustees thought otherwise and a dispute arose which lead to the closing of the ashram kitchen.

At first this was a let down, as I felt I wouldn't have the 'full ashram' experience; but as it turned out, it lead me to several people that I might not have met if I wasn't forced to go into  town for food. The busy streets of Rishikesh offered enlightening experiences, just as its ashrams did.

Never make more than you need 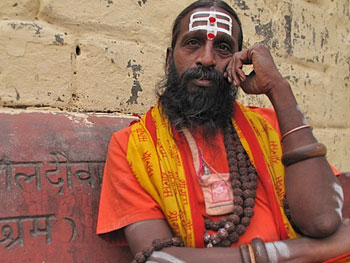 Image: G T Rao was a welder who had withdrawn from earthly attachments to find his soul

Shared equally by holy men and honking motorcycles, if one sat in one place -- as it was suggested that I do by a sadhu named G T Rao -- I could experience everything. I met him when I ventured out for sweets on Holi; a celebration that involves mostly adolescent boys spraying each other with colored dyes.

GT had left his job as a welder 25 years ago in order to follow an inner calling to wander, a spiritual freedom made possible by the humanity of Hindu culture. It is not a crime to sleep in the streets or hold out one's palm for alms. He explained, "Don't earn too much money. It is a waste of time. Never make more than you need. Money controls the mind."

It is amazing how happy GT was, with just the clothes on his back and a book of prayers.

Even on side footpaths, one would encounter interesting people. That was where I met Swami Atma, a jovial man who sat under a sign that read: Free meditation and counseling. He was waiting to make eye contact with a passerby, so he could invite them in for discourse. The day I sat down he was reading The Yoga Sutras of Patanjali, a book I had received that morning. We agreed to read a bit and meet again to discuss it, but he usually ended up telling me stories instead, which I encouraged.

Because astrology is important in Hindu mythology, I went to see a local reader, Dr Amodini Gaganavir. She showed me many empty houses on my chart, which meant that my spiritual path was priority in this lifetime.

The air in Rishikesh was cleaner than it is in LA 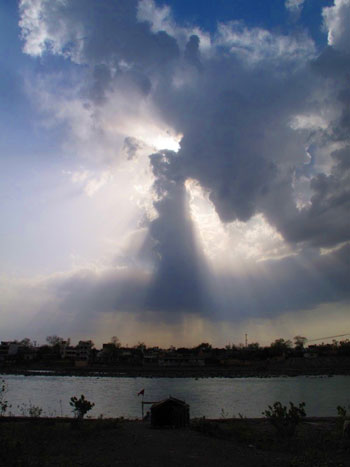 Image: A view of the holy Ganga from Swarg Ashram, Rishikesh

She also said I must finish my book, though I never said I was writing one. To my surprise, she said I was born on an eclipse; a rare event that would occur again on my birthday during the 2010 Kumhba Mela. If I braved the crowds there, she said I could clear my karma. Okay, back to India!

One of the most riveting people I met on the street was a girl I barely spoke to named Anna. Despite the fact that she was armless and had trouble walking, her amazing resolve and smile stick in my mind today. Her silent bright soul said it all.

Random meetings and spiritual conversations are everyday occurrences in Rishikesh. There are people around every corner who are ready to engage in words of substance. It is a rare city that is full of scripture-educated men and women who are willing to uplift your spirit.

For a 'mid-life awakening' I can not think of a better place to be. As for my pre-trip jitters; I didn't get sick and the air in Rishikesh was cleaner than it is in LA. The ashram's kitchen is still closed, so if you happen to go there, perhaps you too will wander the streets and meet my friends.

Charlotte Purin is a writer, artist, and culture connoisseur. Prior to travel photography, Charlotte has written environmentally themed children's books and films, as well as science fiction short stories. Her films have appeared in the Los Angles, San Francisco, and San Diego Children's Film festivals, as well local cable stations. She lives in Venice, California.