Turkey's second ever Islamic Fashion Fair was held in Istanbul from April 8 to 11.

The event, first held in October last year, saw a 70 percent rise in both exhibitors and visitors this time around. It also garners a lot of international interest -- stores across the world now look at stocking kaftans, hijabs, abayas and other traditional garments for Muslim clientele.

In addition to a host of clothing and accessories catering to more conservative taste, this time's fashion fair even saw swimwear on the catwalk. Seen here is just such a creation in becoming pink; it covers you up from head to toe, as is required. A model struts her stuff in a white ensemble very similar to the Indian salwar kameez, except that this one is teamed with an embellished hijab (headscarf) instead of a dupatta. The outfits were not all necessarily subdued -- some like this one showed off hints of shimmer and were set off by elegant patent pumps, creating a very sophisticated look overall. 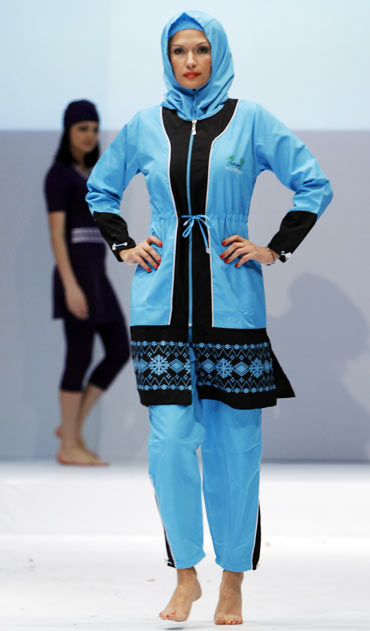 At times, a hood displaced the hijab, like on this blue number intended for swimming. Some cuts, however, were anything but flattering -- this suit can almost pass off for a raincoat, with its sheen and rather frumpy appearance.

Whatever works for you Another two-piece swimsuit makes its way onto the ramp.

Catering to every customer And of course, there was clothing that showed off a little more skin too, like this comparatively bold maxi -- the intention being to target every possible taste!