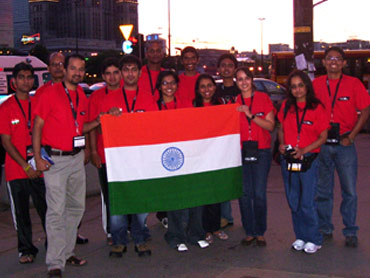 Image: The Indian contingent at the Imagine Cup finals in Warsaw, Poland

Meet the winners of the Microsoft Imagine Cup Envisioning 2020 award.

The event has a variety of competitions such as software design, embedded development, game design and other awards like the Envision 2020, Interoperability Award and Next Generation Web Award, all of which invite students to present innovative ideas in the IT domain.

This year the event had over 90,000 registrations for various categories solely from India. The overall number worldwide was 3,25,000 registrants. But the highlight this year was that four teams from India qualified for the world finals -- 1 for software design, 1 for embedded technologies and 2 for Envisioning 2020 -- with the 2 Envisioning teams taking second and third place in the worldwide competition. What's more, the team that took first place also had an Indian team member.

"The Envisioning 2020 competition was run online for about six months or so, and the teams that qualified for the world level had to go through various levels of elimination to qualify for the world finals," informs Mark D'souza, senior academic alliance, Microsoft Corporation. "At the world finals (held in Warsaw, Poland) there were six teams worldwide."

An achievement award, Envisioning 2020 challenges students to express their own vision for how technology could transform people's lives by the year 2020.

"This year's competition saw some promising entries from India and then two of them making it to the top three in a category comes as a form of an acknowledgment for the rich talent pool that exists in India," said Pratima Amonkar, Director Academia, Microsoft India.

Here we speak to the teams about their award-winning projects.

Taking technology to the small farmer 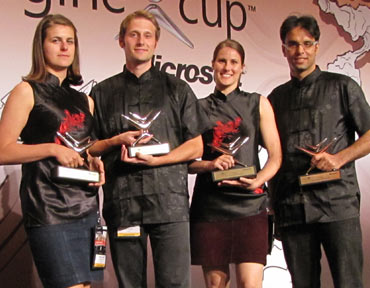 Farmers will also collect data about their specific environments and make it available to large agricultural companies for research and new product development, these in turn will provide farmers with solution. Among the possible applications would be analysis of satellite imagery and delivery of exact solutions to farmers using smartphones.

Because of this more than 800 million small farm owners will improve their agricultural practices. Their farms will be more efficient and they will not suffer hunger or poverty. Billions more will be affected indirectly by improved food production and environmental sustainability.

How did the team come up with the idea?

Pranay: As part of the project we had to make a three-and-a-half minute video showing how technology will affect or impact the lives of people in the year 2020. In our project we demonstrated how smart phone technology and cloud computing and other similar technology could help in delivering agricultural information to small farmers. This information is currently gathered by satellite imagery and other raw data, which is available to farmers in developed countries and the project focused on how we can get this information to farmers in developing countries (like in India and Africa).

How did the team come together?

Pranay: We are all studying in the same department at National Chiao Tung University, Taiwan.

We came up with the idea, discussed it with others in the department and brainstormed. We got the idea from our coaches and we built upon the idea.

Did you expect to win?

Pranay: While submitting the entry, I felt like what we had good potential since the idea was very practical. So for me, yes, it was expected. Also, I have participated in previous years so had a good idea of what to expect.

Pranay: It was amazing. Not just from the travelling aspect but also meeting so many people from Microsoft and other leading IT companies where you have the chance to meet and interact with them.

The Imagine Cup is a great platform to showcase your ideas. If you do get selected it is a big confidence boost too. In 2008, when I went to Paris, it changed my life. It changes how you think, it opens up your mind.

Also, if your idea is good, and if you try, you might also get some entrepreneurial opportunities.

What was the prize? And how do you plan to spend it?

What are your plans for the project?

Pranay: For the project we just had to make a video. But we will be working with our professors on how to implement it. Also, one of the judges offered his support. He asked us to contact him to see how we can take it forward.

So we will be trying to make it a reality.

It pays to use this 'electronic loo' 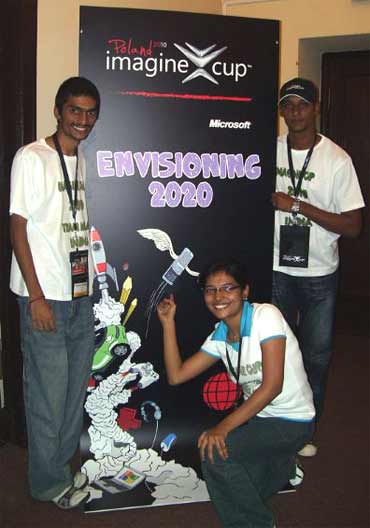 The big idea
Team Kola developed a solution called 'Electronic Lavatories', an innovative eco-friendly system that rewards the user for use.

Also the design brings down the water wasted during flushes.

Tell us about your team.

All three of us studied at students of Prathyusha Institute of Technology and Management, Chennai. I have studied biomedical engineering while Kaushik and Kiarn have studied electronic instrumentation.

What prompted you to participate in the Imagine Cup?

Lalitha: We had registered for the Imagine Cup only a day before registrations closed. So we when we got a mail about the award for Envisioning 2020 we decided to participate since we would have more time to prepare. We submitted the same project for the Embedded Development competition and Envisioning.

We reaches the semifinals in the former category, but we did not have the time to refine the project since we had our final semester going on. However, for Envisioning we had more time, so we kept updating it.

How did you come up with the idea?

Lalitha: It was actually Kaushik's final year project in college. One night he called me and he told me all about these electronic toilets. I, of course, had not idea what he was talking about. But I got on board and we gradually began to refine the idea.

Tell us about the project.

Lalitha: The public toilets that we have, the 'pay and use' ones, are hardlu used by the people they are made for. Despite the fact that they are everywhere, people continue to defecate in the open, often right next to these toilets. Why pay to use a toilet when you can do it for free right?

So we thought, what if instead of people paying to use toilets, these people are paid to use the toilets?

How it works is when people use the electronic toilet, once the flush button is pressed and after the toilet is cleaned, the user will be given Re1-2 for using it. Another aspect we tried to accommodate is reducing the amount of water used. Usually about 5-7 litres of water is used to flush the toilet bowl. But by our system, only the outer wall will be cleaned and the contents of the bowl dumped in a tank. This way we reduce water consumption to about 2-3 l.

Going further, the waste collected can be used to create biogas etc. So on one hand you are giving money to the user and on the other you are making money.

What was the prize and what are your plans for the future?

We just graduated and are planning to get master's degrees. Kiran will be joining work.

And what are your plans for the project?

Lalitha: We are working on the project. Kaushik did it as his final year project so it is more a prototype right now. When we try to implement it, it might have some flaws that we will have to address and we might have to make some major modifications. But we have started working on it and hopefully it be a reality.

Making sure hungry mouths are fed 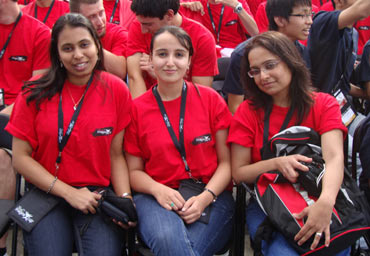 The big idea
Team Target Locked developed a solution to solve the worldwide issue of hunger. The solution focuses on using ground and satellite surveillance coupled with GPS monitoring for tracking food-carrying vehicles.

The systems will detect not just changes in weather conditions but also formations for ambushes and terrorist activities that could prevent the food from reaching its final destination.

Tell us a about the team an how you came to participate in the Imagine Cup.

Anwesha: We have been studying together for four years at the Indira Gandhi Institute of Technology, Delhi, doing BTech in Computer Science. We met up in the third year and would work together on projects. Ramya and I graduated in 2009 and Monisha continued with a dual MBA course in USA.

In 2006, we attended the Imagine Cup finals in Delhi and since then knew we wanted to participate. We liked this year's theme of how we would solve the major problems in the world. So we came up with this idea, that we thought could really help people who needed help.

How did you come up with the idea?

Anwesha: Over the last 4-5 years there have been a number of events, natural or otherwise (in Orissa, Nigeria, Congo, Haiti), where people have suffered trmendously. For whatever reason, either because of a military regime or natural disaster, food is not reaching them. Why should people stay hungry when so much food is going waste in godowns or during transportation or being stolen by looters.

With this backdrop, we came up with the idea that of using satellites that are used for military or climate monitoring also be used for food surveilance. We can track the food as it moves from one place to another, not just through satellite surveillance, but also through ground surveillance (which is getting cheaper every day). So we could have CCTV cameras tracking the shipments along the routes as well.

This way we know that a particular vehicle is going to carry a certain amount of food from point A to point B. We can also assign unique identification numbers (UID), so that the driver of the truck knows that the food he is carrying is given to the person who holds a particular UID.

This way, food is not just carried safely but is also reaching the people who need it.

Anwesha: It was overwhelming. There were 400 students from across the world all in one place and so many Microsoft students partners and other people who we could meet adn interact with. It was so overwhelming listening to these people and their ideas. When we reached, we felt like even if we don't win anything, the experience was just amazing.

Anwesha: It as fantastic. When our names were announced, I think for a second my heart just stopped beating for a second. I could not believe that we had made it to third.

More than winning though it was the fact that this idea of ours actually had some future, that it was a feasible idea. It gave us a great boost, that we can move forward with this idea over the next 5-10 years or even less.

Are you working on it, trying to make it a reality?

Anwesha: We would like to but it will take a lot of financial investment. We won USD 3,000 and with the prize money we would like to start work on the idea.

Anwesha: Ramya is working right now and Monisha is in the US studying. I will be going to the US to do my PhD in management science soon. Monisha and I will be nearby in the States so we will be getting together to work on the idea. Ramya will be trying to join us as quickly as she can manage.