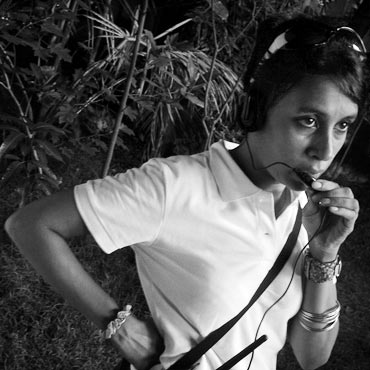 Shruti Gupte, Production Designer on Aisha, tells Abhishek Mande what it takes to be a successful production designer and how she made it in Bollywood.

Sometime in 2002, Shruti Gupte stood somewhere in Rajasthan, her hands folded, surveying what lay before her.

A barren piece of land stretched as far as her eyes could see.

"This is going to be interesting," she told herself before she got into the back of the car and headed to the drawing board.

There was a village to be built.

Fresh from the School of Architecture, CEPT, in Ahmedabad, Gupte had interned at an architecture firm after her graduation for a few months. But deep down she knew her calling lay elsewhere.

She visited Vienna as an exchange student and her final year thesis was more about movies than about architecture.

When Lakhia asked her to construct a village for his movie -- his brother was her senior at the School of Architecture -- she dropped everything and headed to Bollywood.

'Prahlad Kakkar will let you grow and watch over you' 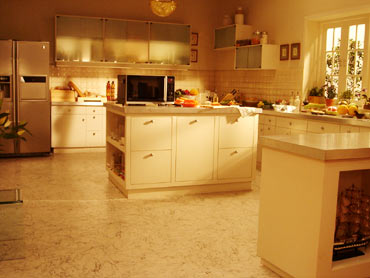 After the film was complete, Gupte visited advertising filmmaker Prahlad Kakkar's company Genesis in Mumbai. She was told there were no vacancies, but refused to leave without getting a job.

She remembers the day clearly. "There was a tasting session happening right in the middle of the office and it was buzzing with activity. The frenzy around me fascinated me no end. I knew this was the place I wanted to be."

After waiting for about six hours, the flamboyant Kakkar noticed her and called her in.

"He heard me out and saw my work. At the end of it he asked if I was doing anything the next day. The following day I reported to work," she recalls.

Like everyone who starts from the bottom, Gupte did everything that needed to be done at Genesis.

So when she wasn't redesigning a part of the office and possibly getting cups of coffee for her seniors, Gupte assisted Kakkar and his team on over half a dozen ad film projects -- from Pepsi to Benadryl cough syrup.

When it was time for her to move on, Kakkar bid her a warm goodbye. And the moment he learnt she was freelancing as a production designer/art director, he offered Gupte her first freelance assignment.

"That's the beauty of this man. He will let you grow and even when you aren't with him, he will watch over you," she says.

Thanks to her networking skills and her talent, ad films kept coming her way as did music videos -- she has done over two dozen commercials and half a dozen music videos so far including one for KK and singer Shibani Kashyap among others.

'A production designer has to keep everything as real as possible' 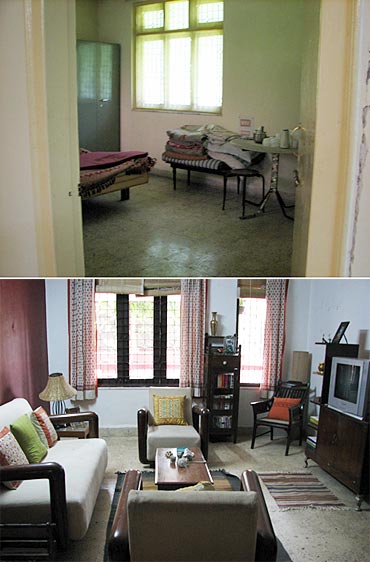 Movies were a gradual transition, having already worked on Mumbai Se.... There was Ek Ajnabee the film starring Amitabh Bachchan and Arjun Rampal for which she worked as a production designer following which she was the Art Director (India schedule) for Don starring Shah Rukh Khan, then a production designer for Piyush Jha's Sikandar and Aamir Khan's Taare Zameen Par.

For her latest film Aisha, Gupte came on board barely three weeks before the film went on the floors.

"It was a last-minute decision," she tells you, adding that most of the films she has worked on have been by first-time directors. "The joke in the industry is that if a debutante director wants a production designer, they come to me!" she laughs.

So Gupte started work on creating Aisha's world. She decided on the look and the feel of the movie, designed the interiors of Aisha's home and went about scouting for farmhouses around Delhi where the protagonists would party by the pool.

"Aisha is set in high society Delhi. I have never lived in that city and know very little about it. But having read the script and understood the characters, I was clear about what the movie would look like."

"Besides, a lot of designing also comes from logic," she adds. "For instance, someone from a rich household like Aisha would never be shown visiting a Barista or a Cafe Coffee Day. It would have to be an exclusive lounge. If they were to party, it would have to be at a posh farmhouse. The effort is to keep everything as real as it possibly is," she says. "That is what a production designer is meant to do."

After the Sonam Kapoor-starrer hits the movie screens this week, Gupte will disappear from the movies scene for a while.

"I always work on just one project at a time. My next was supposed to be Dostana 2, which isn't happening for now," she reveals.

So she will return to ads -- something she does when she is in between movies -- before something meaningful comes up.

For now, as she says, she's quite happy in 'Aisha's world'.

Click NEXT to find out how you can become a production designer.

Shruti Gupte on what it means to be a production designer, what it takes to be in this profession, and explains the difference between her job and that of an art director.

Here's how you can become a production designer 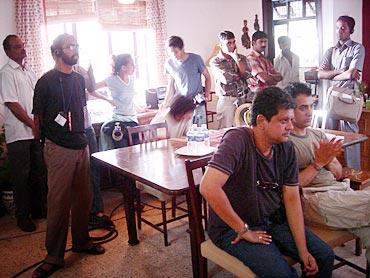 What exactly does a production designer do in a Bollywood movie?

A production designer translates the director's vision on to paper and then into real life.

S/he creates the world that the characters live in, makes them real and relatable and is responsible for the overall look and feel of the film.

It requires a lot of referencing, scouting for locations, understanding what lights are being used, what colour clothes are being used in a particular shot and of course an understanding of the characters and the plot of the film. The idea is to be able to paint a picture that the director has in mind.

How different is this from the job of an art director?

An art director usually executes the production designer's vision. The art director's job is related mostly to construction though it is important that an art director has an aesthetic sense too.

The production designer is responsible for the complete visual packaging of the film. Initially, this was the job of an art director.

Today there is a need to maintain a certain mood or a colour palette throughout a film, which wasn't the case earlier. For maintaining this consistency you need someone above the costume designer, hair and make-up artistes and the art director to keep it all cohesive through the 120 minutes duration of the film.

The job of a production designer involves co-ordination with practically every department of the film unit, but at the same time not get into the daily nitty-gritty.

'You must have a strong sense of design' 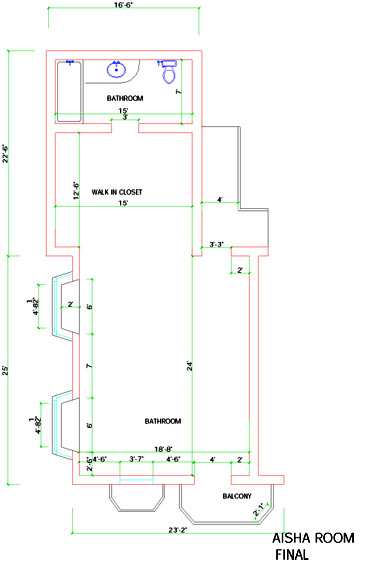 How does one get into this profession? Who does a fresher approach and what should s/he be carrying as a portfolio?

One gets in by contacting someone who works in the industry. These days, social networking sites help in getting you the initial contact. Also, film industry-related Web sites like mandy.com, 1takemedia.com, enlist professionals including me. You could post your profile on their classifieds/yellow pages.

Your portfolio should comprise your works as a student or as a professional -- your sketches/drawings, designs set designs if you have done any.

Showcase only your best work, something that will speak of your personality and you are proud of.

It always helps to have a well-rounded artist on board the team!

What would you say are the prerequisites to become a successful production designer?

First and foremost, you must have a strong sense of design without which you won't be able to make any progress in this field.

Although the industry doesn't demand it, I feel that formal education helps a lot. You must have a degree in architecture or interior designing essentially to get an understanding of design and construction.

It would be foolish to try and get into this field if you don't know anything about material and construction, how to paint or what kind of paints are available.

More importantly, you need to be able to visualise the space in which you are working and should be able to put the design in your head on paper.

Most of all, you must be a team player and be open to suggestions. The job requires co-ordination between various departments and dealing with a lot of people.

My temperament, for instance, has changed drastically since the time I started working as a production designer.

How much money can a fresher make? Could you give us an idea of what an established production designer charges per film?

As for established names I've never consciously found out, but I am told that some charge as much as Rs 25 lakh (Rs 2.5 million) per project. 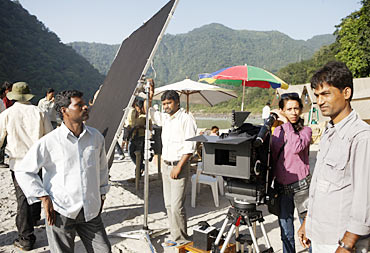 What does a regular day in a production designer's life look like?

Well, it depends on what stage of production the film is.

If it's still pre-production then it entails:

And this is if it's a house interior.

If it's construction, then it means being on set on the first day and marking the set on the studio floor, making adjustments to the design depending on the director of photography and the movie director's requirements.

It also means visiting the set at least twice a day to check on the progress, to troubleshoot with the construction supervisor and put out 'fires' wherever and generally ensure the set is coming along as per design and on schedule...

This is also the stage when the fine-tuning to the set happens, as it is being built, sometimes, what's on paper may not translate quite right into construction, which means adjusting the details on set!

Once the set (the shell) is ready, it gets dressed to make it alive and breathing!

The furniture comes in, the lights get put up, the drapes are hung, the vases with fresh flowers are brought in microwave gets plugged...

Basically you are the first person to be on the set and the last to leave.

Most days aren't as straightforward as I've made them out to be. This would be an ideal world without Murphy's Laws!

More often than not 'Murphy' comes to work with us and has us on our toes through the day!

What is the one piece of advice you'd give aspiring production designers?

Don't chase the money; chase the work. Money will follow. This was something Prahlad Kakkar told me and I've lived by it.

Of course, it will mean a good deal of struggle initially. But eventually it will help you survive.