Sign in  |  Create a Rediffmail account
Rediff.com  » Getahead » This marathoner lost his sight but not his vision

This marathoner lost his sight but not his vision 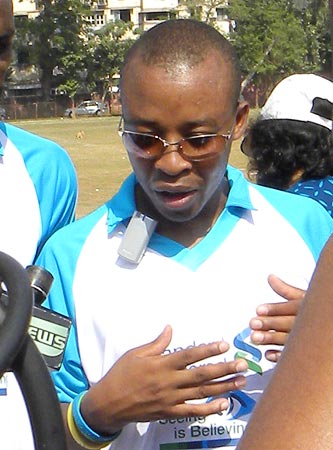 Dressed in a Standard Chartered tee -- he is the bank's brand ambassador for their Seeing is Believing campaign -- Wanyoike stands in the mid-morning sun, beads of sweat trickling down his forehead. Beside him is his friend and guide Joseph Kibunja who will run the Half Marathon at the Standard Chartered Mumbai Marathon being held on Sunday, January 17.

The two are inseparable, their wrists tied with a cord so Kibunja can steer Wanyoike through the various runs and indeed through life.

Wanyoike's story is well-known and much written about. The 35-year-old athlete who has won the Singapore Half Marathon, set a world record in London and Hamburg and has also won the 5000m and 10,000m golds at the Athens Paralympics, went to bed one night and woke up the next morning blind. A mild stroke stole his eyesight from him forever.

"I always wanted to run," Wanyoike says in a thick Kenyan accent, "Even before I became blind, I would run on my way to school, sometimes carrying my books with me at other times giving them to my friends along the way. I dreamt of becoming a champion when I was 12."

Wanyoike's dreams however were cut short after the stroke. With no hope of regaining his eyesight, he decided to give up on life. He says: "For the longest time, I could not come to terms with my blindness. I did not do anything and simply sat around." 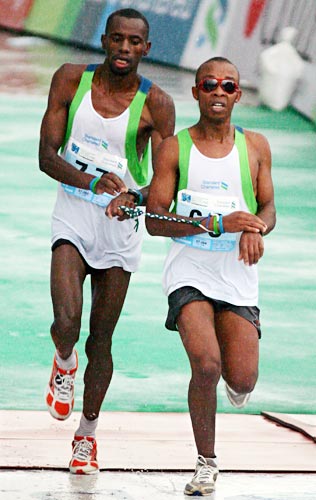 Years passed. The blind school he went to taught him to knit, the Braille and has he puts it 'some basic daily living techniques'.

"It was like starting all over again. Without my eyesight, it wasn't easy. But I was getting used to it," he says.

But all through this Wanyoike's legs that once made him a star athlete, lay idle. Once the fastest kid on the track, Wanyoike was now the slowest man on the side street.

Help they say comes from the most unexpected places. In Wanyoike's case it was in the form of his friend Joseph Kibunja.

Kibunja used to be a carpenter before he decided to start running around the world with his visually impaired friend. "I liked being a carpenter. But today my world has grown far beyond making chairs and tables," he says gesturing with his hands, trying to explain how things have changed for him.

A simple cord binds Kibunja and Wanyoike's lives, a cord that keeps their feet on the ground, keeps them together and takes them places they'd never imagined they'd visit.

Wanyoike says, "Every morning, Kibunja knocks on my door at 6.30 in the morning and we start training. We run for about 25 kms every morning before returning home. In the evening, we run for another 10 kms and also cycle (on a tandem bicycle) for an hour or more. In between this we spend time with school children spreading the word and try to help out people through the Foundation."

The Henry Wanyoike Foundation organises tournaments with educative themes and touches on various issues ranging from HIV/AIDS to drug abuse and more. The Foundation encourages children and teenagers to devote their time to sporting careers.

It also empowers people so they can stand on their feet by giving them grants to set up small businesses and also sponsors education for special children.

Among other things, Wanyoike speaks strongly about cataract surgeries. He tells us that it costs as little as $40 for a person to regain his/her eyesight and has been urging people across the world to donate for the cause. 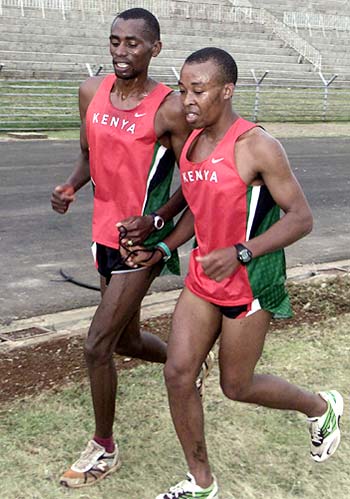 Image: Henry and Joseph train for before the Athens Paralympics in 2004.
Photographs: REUTERS/Thomas Mukoya

Wanyoike has been in India for some time now and has been practicing along the Marine Drive each morning along with Kibunja. He says, "We train for about an hour in the morning and an hour in the evening by the sea after which we work out in the gym for another hour. Unfortunately we haven't been able to prepare much for the marathon because it has been raining in Kenya. We're trying to make up for it here."

This is the sixth time that Wanyoike and Kibunja are running the Mumbai Marathon. And the newly constructed Bandra-Worli Sea Link Road will be a new experience for the runners. It isn't any impediment though. The real challenge for the two lies elsewhere.

"We are looking forward to doing that stretch and we are used to running on unfamiliar grounds. But we find it difficult to get around the crowd because there are so many people running. We finished the Half Marathon in one hour and 14 minutes the last time. The record is 1 hour and ten minutes."

It is this last mile that almost always poses a challenge to most runners. Wanyoike and Kibunja are no exceptions. Wanyoike says that at times like these he thanks the lord for Kibunja's presence. "He keeps telling me to go on, encourages me to remain positive and reminds me that a lot of people are watching us," he says.

When you ask him if he has a message for India's youth, Wanyoike says, "You need to believe in yourself ad be positive. Everyone is an achiever and anyone can be a champion as long as they have the determination and self-confidence to become one. The key is not to give up."

Wanyoike says it doesn't take much to become a champion. He suggests one must at least give a shot to something one believes in. "Journey of a thousand miles starts with one step," he says quoting Lao Tzu before signing off with his trademark line, "It's alright to lose sight but don't ever lose your vision."