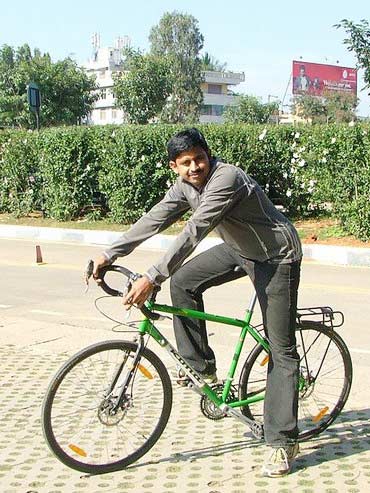 Keen on experiencing new cultures and places, many youngsters are taking to unconventional modes of transport to explore the country. Some like to cycle, others like to cover the distance on their bikes even others take the rickety state transport bus and hit the road each weekend and some sleep in houses of unknown people. In a series of four, Abhishek Mande finds out what drives these young women and men.

Today, meet Shree Kumar a software engineer who likes to cycle across India.

Ten years ago, Shree Kumar decided to take charge of his life. He wanted to lose weight and chose the bicycle as his form of workout and has never left it since. He even rides to workplace and back on a cycle. And the moment he has a few free days on hand, he pulls out his bicycle, hits the highway and cruises along at pleasant speeds letting the world pass by and soaking in the culture of the villages he crosses.

Kumar is 31 and has so far travelled across a good part of the country on his cycle. He has extensively covered south India and has even cycled from his hometown Bengaluru to Kolkata among other places.

He gives plush city hotels a pass and chooses to stay at roadside lodges. At times he has even shared homes of local villagers, who he finds more hospitable than five star hotel staff.

Here, Shree Kumar tells us how he got hooked on to the bicycle, travelled the country and recounts an incident when he was left with just the clothes he was wearing: 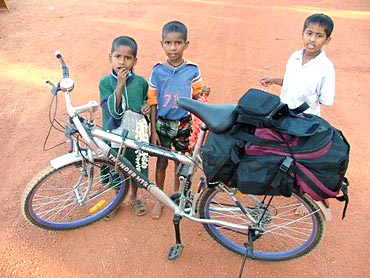 I started cycling about ten years ago. What began as a morning exercise became a passion. Initially I used to cycle along the Ring Road, which used to be considerably empty then. When I started working, I cycled to work and continue to do so.

Eventually I started cycling out of Bengaluru. My first trip was to Mysore and back. After that there was no looking back. I followed up my Mysore journey with trips to Mangalore, Kanyakumari and Chennai among other places including Kolkata."

The key to a good cycling trip according him requires two things -- an open mind and light baggage.

'I was left with just the clothes I was wearing!' 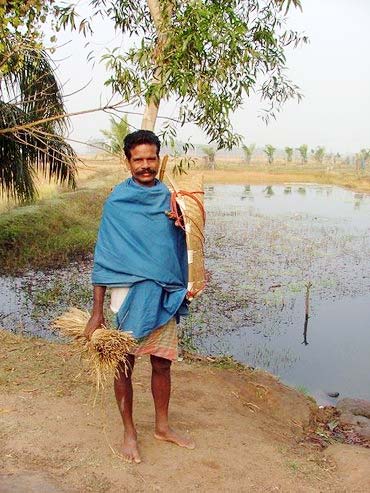 He continues, "I usually pack two sets of clothes -- one is a dhoti-shirt (which I wear at night while sleeping) and another is a spare cycling tee and shorts. Besides this, I carry a spare tyre tube, a set of Allen keys, a puncture kit and a pump. I try to load as much as I can on the cycle itself so I am not carrying the weight on my back for eight-ten hours at a stretch."

For a safe travel, Kumar says it is important to follow traffic rules.

"Remember you are on a cycle whereas the world is travelling in high speed vehicles. The safest thing to do is to keep left so you don't get in the way of most traffic and lets you travel at your. Cycling at night is a big no-no as is stopping when someone calls out to you.

Last year, I was travelling in Western India when I met a local who was also on a cycle. He wasn't a pro but said he used to cycle a lot. He was riding in the same direction as me and we rode together for quite some time. We were about 20 km away from Dwarka and could have covered the distance that day itself but he suggested we spend the night at a temple nearby. So we set up our camp in the temple and called it a day.

The next morning, I woke up and everything besides the clothes I was wearing was gone! I was perplexed. My cycle was stolen, my money, even my mobile phone was gone! I went to a police station nearby and explained my problem to the inspector. He registered a complaint and gave me some money. I reached Dwarka with that money and checked into a cyber cafe.

Fortunately one of my friends was online and he put me on to one his relatives in Dwarka. I borrowed some money from him and returned home, poorer and wiser. 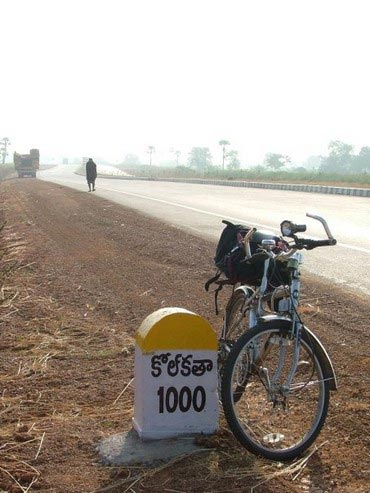 1. Enjoy your cycling trip. Don't be obsessed with how much distance you have covered, though I know it is something all of us do when we are young.
2. Gradually increase your stamina. Don't start off with a long trip. Take shorter trips to begin with.
3. Set manageable goals. Don't go overboard. If they you ride too much on a single day, the effects are bound to show the next day.
4. Maintain a low profile. If you are carrying expensive things like a laptop or a high-end mobile phone, tuck them away in your bag so they aren't seen.
5. Go with the flow. Have local food; try staying in people's houses and keep an open mind.
6. Carry cash because you might be in villages that don't have ATMs. Refill your wallet at the next big city.

Shree Kumar suggests places to cycle to from Bengaluru: 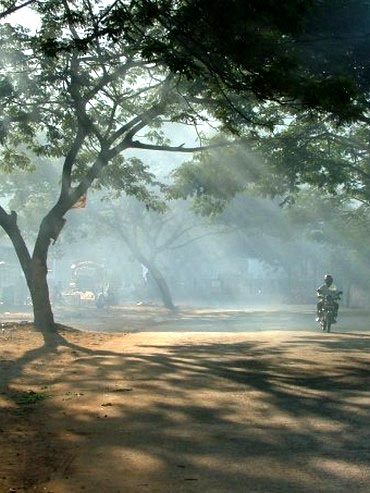 Approx distance: 100 km or more depending on which part of the city you start from

Ideal route: Reach Mysore Road, and take a right turn near Rajarajeshwari College and follow the road till you reach the Big Banyan tree. Manchinbelle dam is 8-10 km from there, and is a nice place after rains.

Approx cost for one night: Since you're cycling, besides what you spend on food and unforeseen circumstances you won't need anything

Where to eat: Eating Tatte Idli by any of the roadside hotels should be good.

Where to stay: This is a day trip.

Look out for: The landscape leading to Manchinbelle dam

Ideal route: Take a left turn after Devanahalli. At the next junction, another left turn. After a few more kilometers, you will reach a junction, known to cyclists as 'Idli point'. Road is flat till this point, but the fun starts after this -- 7.5 kms of climbing on twisting roads, with the last 1.5 kms being very steep.

Where to eat: Lodging is available on Nandi hills if you need, but most bikers come back the same day.

Where to stay: This is a day trip

Look out for: A good climb, excellent scenery and mischievous monkeys en-route to Nandi!

Read the second story in the series here: Motorcycle Diaries: Taking the road to freedom