Four years ago Sanjay Patel began work on Ramayana: Divine Loophole, an illustrated version of the ancient Indian epic. The book has been well-received so far and has garnered praise from various quarters. Here Sandip Roy finds out more about how he discovered his calling, his Hollywood connection and what drew him to the Ramayana.

When Sanjay Patel sneezed his parents would say 'Sita Ram'. Growing up in their family-owned motel in San Bernardino (USA), Patel had no cultural context to place that in. "I thought it was their way of saying gesundheit," says Patel. "Only later did I realise that they are actually saying Sita and Rama. It was their version of bless you."

Now Patel, an animator and storyboard artist for Pixar by day, has finished four years of backbreaking work on his illustrated version of the Ramayana. And the book, titled Ramayana: Divine Loophole, is eye-poppingly fantastic. The 2,500-year-old epic has gotten a new pop culture avatar. "I love its geometric regularity and the retro-twinkling stars," says Manish Vij, co-founder of UltraBrown.com. "It reminds me of old Vegas or the sign at Sanjay's parents' motel."

That motel, in a way, helped shaped this Ramayana. Patel's parents moved to the United States in 1981 from the United Kingdom to run a rundown motel off Route 66 in California. The clientele was distinctly iffy and it put a severe damper on Patel's social life. 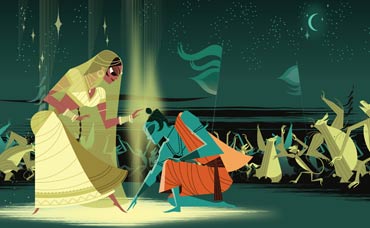 So, he spent a lot of his time on his own doodling, winning art competitions and developed his eclectic taste in art. He was obsessed with GI Joe comics and the X-men, but also loved Michelangelo and Japanese anime.

"But it took me 20 to 25 years to discover what had always surrounded me," he says. He was blind to the picture of Hanuman carrying a mountain on his back, or a blue-skinned Rama surrounded by warriors. His father sang Rama bhajans every day, decorated the pictures with flower petals. But, adds Patel, "To me, it felt like decoration."

He had never been to India. It might have been different if the family were more integrated into the desi community around them. But his mother was diagnosed with schizophrenia, and they couldn't really do all the Indian social functions other families did, said Patel. "It led to a black hole in my family. It's been upsetting because there are a lot of things I am proud of that I want to share with my mother. But I can't."

But, he said, her condition had contributed to making him the kind of artist he was. "Because she was not able to nurture me the way a healthy mother could, I became more introspective and much more artistic."

His art led him away from the motel to Cal Arts and then to Pixar. There he got to work on films like Ratatouille and Monsters, Inc. But he never really got to do something that looked like him.

The Ramayana is not just a book...

Growing up, Patel said, he didn't care that his superheroes did not look like him.

The first desi he encountered in cartoons was in The Simpsons. He had a stint on that show and remembers the first time he worked on a scene involving Apu, the oh-so-Indian-accented shopkeeper.

"That's when it struck me that this is the face my friends think of when they think of an Indian American. The stereotypes might have been true for the 1980s. Many of us, my parents included, ran convenience stores, motels and gas stations. But it is 2010 now."

Patel's first attempt was a book of Hindu gods and goddesses. The Little Book of Hindu Deities came with cheeky text and cute illustrations, one page per god. Even Kali looks cuddly (Patel actually has a plush Kali sitting on his mantelpiece). He was nervous about the reaction it would evoke. After all, while for some Ganesha is a cute, exotic motif that can be imprinted on T-shirts etc, he is a god for millions of Hindus. But the book got rave reviews, from the Hindu American Foundation to his cynical young Indian-American cousins.

"They told me this got them interested in what their parents had been trying to tell them. That's pretty awesome," says Patel.

But the pantheon of gods is one thing. The Ramayana is another undertaking altogether. It has been ripe territory for artists, and playing with the storyline has also brought down the wrath of believers on artists. MF Husain had felt the sting as had Patel's friend Nina Paley. Her Sita Sings the Blues was a huge hit, but still took some hard knocks.

Paley understands that the Ramayana is not just a book.

"The story permeates daily life in India. My best friend in Trivandrum is a Christian. She grew up being told to not talk too loudly, to be more like a Sita," she says. She gets perturbed when non-Indians take her animated film as Ramayana 101.

"I think Sita Sings the Blues works better for people who already know the Ramayana. They get the inside joke. It's weird to have it as an introduction to the Ramayana," she adds.

'I wanted to capture the drama and excitement the story deserved' 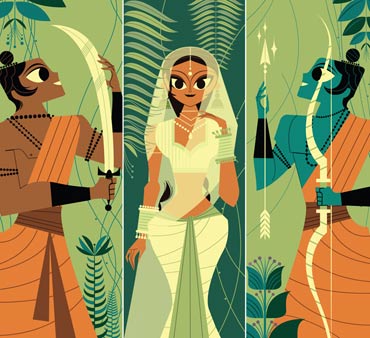 Patel, unlike Paley, wanted his book to be something that would appeal to Ramayana fans as well as the uninitiated. He wanted people to be able to just flip through the book and get a sense of the story. He studied the sculptures of Angkor Wat, the batik paintings of Indonesia and Indian miniatures. He even watched the graphics of the Ramanand Sagar teleseries.

"The story is full of sharp moments, violence, big battles, all kinds of epic adventures. I wanted to make it as graphic as possible," says Patel.

Patel tweaked the story. He compressed it to make Kumbhakarna disappear, and expanded it to include three leisurely spreads showing Rama's monkey and bear army building the bridge to Lanka under a blazing sun and a crescent moon, the sea changing from celadon green to inky blue. The illustrations are deceptively simple in their flat colors and bold shapes. The demons have triangular eyes and crocodile teeth. The heroes have rounded lines. Bear king Jambavan is made of friendly half circles.

Patel was inspired by Richard Scarry's Busytown filled with rabbits and cats wearing clothes and being very human.

"I was in love with his work and I wanted to make it cute," he says. "But the Ramayana is anything but cute. It's very dramatic and big and action packed. I had to redo the story two or three times to capture the drama and excitement the story deserved."

And how did he do that? "My friend is this little guy," says Patel holding up an HB pencil. He has folders and folders, dating back years, filled with intricate sketches. He pointed to one of a crouching Hanuman that ended up being just one figure in one corner of an elaborate court tableau. After the drawings were done, he scanned them into the computer and then used Adobe Illustrator to manipulate the shapes and fill them with colour.

"And little-by-little I created this entire world," says Patel.

Creating his Ramayana was quite an odyssey, but Patel is happy. "I don't think I will have an experience like this ever again. I am really grateful," he said. His website reflects that. It's called GheeHappy.