Sign in  |  Create a Rediffmail account
Rediff.com  » Getahead » Want to make it big in TV? Passion is key

Want to make it big in TV? Passion is key 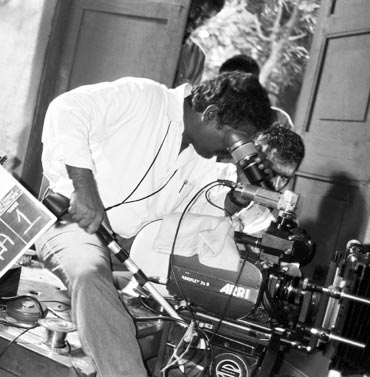 Do you wish to join the ranks of internationally renowned television personalities, like David Crane, the American writer-producer who shot to fame with his hugely popular television series Friends or our very own and formidable Ekta Kapoor, producer and queen bee of Indian television?

While writers and producers have captured the spotlight (apart from the on-screen stars), there are a number of other career profiles that are much in demand in the television industry. TV programmes are created by a team of skilled and creative professionals who fall under the purview of television production and direction. These include cameramen, editors, sound technicians, actors, producers and directors.

For instance, a television producer is in charge of deciding which programmes, episodes or news segments get aired. A producer's main job is to coordinate the activities of writers, directors, managers and agents to ensure that each project stays on schedule, and most importantly, within budget. Directors, on the other hand, are responsible for the creative decisions of a production.

Television direction and production, involves all these professionals working together, like a well-oiled machine, right from conceptualisation of an idea, to fleshing it out into a script, to directing it and finally, presenting it to the public. Production, on the whole, involves:

Is it for you?
It is important to understand that it is a highly competitive profession, even though employment opportunities are immense. Before you embark on your TV career, you first need to ask yourself these questions:

If you answered "yes" to three or more of these questions, then you should consider exploring a career in television.

Insight: There is often considerable pressure in TV production. For instance, be ready for criticism! Secondly, it is hard to break into the industry as a director or as a producer. So, if interested, spend some time educating yourself and getting proper training that will serve as your launch pad into the industry. But, besides this technical training, you must possess certain qualities as well.

Let's take a look at the qualities beneficial to anyone who wants to make it in this field. 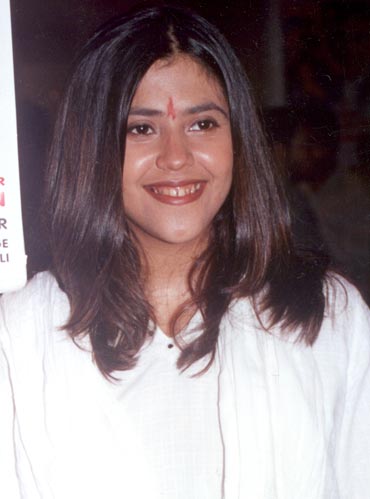 Image: Ekta Kapoor has carved a niche for herself in the TV industry
Photographs: Rediff Archives

The television industry offers an open platform to those who are on the production side to step up and prove their worth. With the media explosion that has hit India over the past couple of years, a plethora of television channels have opened up, reaching out to all kinds of people in various ways.

There are plenty of TV channels in India that offer jobs to people trained in the media field. You can join a particular channel that is of interest to you and opt for a specific programme that you would like to work on. Apart from channels the other big route into television is through production houses. Production houses are essentially companies that make shows for channels -- for example Balaji Telefilms, Cinevista Communications and Miditech are some of the fairly big production companies.

The same applies to international channels as well. News channels, too, present a multitude of exciting opportunities, some of which like news reporting are unique to news channels.

In a country like India, news or what is popularly referred to today as infotainment shows (such as Aap Ki Adaalat, Sansani, We the People and Jai Jawan) are probably the most followed shows, second only to our favourite soap operas.

After completing a course in TV production, you can start off by assisting an established producer or director and learn the tricks of the trade, and also build on your practical experience. There are so many options open to you, but don't get confused. Let's take a peek at various profiles involved in production:

Producer
You must be prepared to start at the bottom of the ladder and work your way up. Most start as a production assistant and it is you who will actually make everything happen, as planned; right from handling all the administrative work, such as booking hotels and flights for the crew, arranging shooting schedules etc, to being responsible for keeping records of sequences, scripts, call sheets and daily reports. It's not an easy job at all. The next step is production manager. A production manager shoulders the delegated responsibility for the overall organisation of the programme. He or she is responsible for the technical pre-planning of the productions and for coordinating the cast, crew and scenery, within a prescribed budget.

Director
You can start your career by assisting a prominent director. As an assistant director (AD), you must be ready to take on just about any responsibility; right from bringing the cast members their favourite coffee, to understanding the right camera angles, to dealing with temperamental director and actors. An assistant director is essentially the director's right hand. After paying your dues as an AD, you can hopefully make a break as a director. A director is responsible for the management of all the creative aspects that go into the making of a film or a serial. The director is in complete charge of the studio or location floor and controls the film, artistically. He or she is the one who decides the camera angle and directs the work of the cast and crew, costumes, choreography and music, conduct rehearsals, etc.

Screen writer
He or she plays an important role, and the job involves writing or rewriting a story to suit the television medium.

Cinematographer
He or she composes each scene to be shot, and also decides the lighting and camera angles as per the director's requirement. He or she leads the camera/lighting team and is involved in the planning and execution of a shoot from the pre-production stage.

Soundman
Sound effects that accompany the visual images, play an important role in the overall appeal of a programmes, and this is the soundman's job.

Editor
After all this happens, the editor comes into the picture. An editor requires great skill. It is he/she who puts each scene in the right sequential order. An editor views processed film and video with production personnel to analyse, evaluate and select scenes, and then determines which scenes need to be improved or re-shot. He or she synchronises the sound track and adds special effects, wherever necessary.

Animator/ graphic designer
Another interesting option is to become an animator. Animation films and serials have become very popular these days. It is created by filming sequences of drawings or computer graphics and processing them at high speed so that they appear to be moving. One can work as an animator for cartoons, feature-length movies, TV commercials, motion graphics or multimedia or as a game designer. Graphic designing is another highly specialised field of creating logos and promo spots for the television screen. If you have ever watched MTV or any major televised sporting event, or the news, you will realise the importance of design in the presentation of each programme. 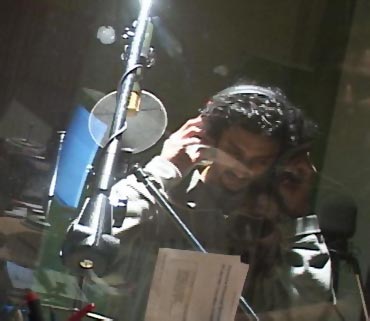 You can apply for a technical course in film-making right after you finish class 12, in any stream. However, completing your graduation, in any discipline, will give you a broader choice and will make you eligible to apply for a TV production course. The courses aim to equip an individual with all the technical aspects associated with this field. The end result is a full-time, competent individual who can overcome all the hurdles of TV production.

Here are some of the top institutes:

The advantage of attending a top college is that you get the benefit of learning from the very best. Guest lecturers from the industry are frequently called upon to give valuable insights into their work and the employment scenario. Rest assured you can be confident that you will emerge from this experience a well-rounded artist, who has a solid grasp of the different elements of television direction and production. This includes the creative aspects as well as technical finesse and other intricacies of the job, too.

As is the case with most colleges these days, students must be prepared to give aptitude tests and interviews. The duration of these courses depend on the specific course and institute an individual opts for. There are diploma, post-diploma, and even certificate courses in each area of specialisation.

Specialisation areas include production, direction, editing, cinematography, animation, sound engineering, script-writing and so on. So, you have the option of not only deciding your area of specialisation, but you can also decide how much time you want to invest into studying and schoolwork.

Insight: Be prepared to invest a substantial amount in equipment that you will need during the course of your programme. This equipment will act as your right hand in every assignment you will undertake during the course. Although most colleges provide students with top-of-the-line equipment, it is still recommended that you buy yourself relevant equipment. 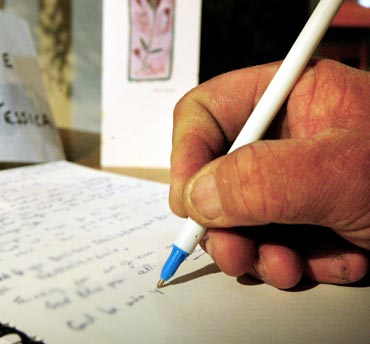 If this is the career you have chosen, you must realise that it's not the most stable career. Earnings of people in production and direction vary, depending on education, experience, type of work, union affiliation and duration of employment.

Salaries for directors vary widely. Producers seldom get a set salary; instead, they get a percentage of a show's TRP earnings and popularity. It's hard to put a figure to the salaries that professionals get in the field of television largely because the range is too wide. A production assistant could earn Rs 5,000 or 15,000, largely depending on experience, education, and your soft skills like: communication ability, how organised and proactive you are.

How well you do will largely depend on how passionate you are about your work. This is because passion will dictate the time and energy you invest in your job. Many young professionals are very keen on working with a particular channel and take up a job for a lower salary initially. Similarly there is a disparity in salaries when a channel hires and a production house hires.

With channels if you have been hired as a permanent employee (channels also hire contractually for short time periods when work pressure is high) you get benefits like PF and medical, whereas this is not the case with most production houses.

Top myths regarding the TV industry 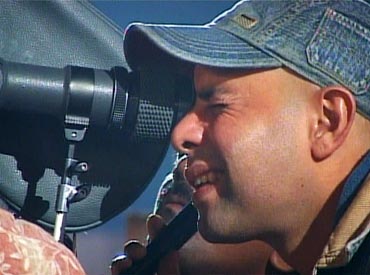 Myth 1: It's a glamourous, fun-filled career. Every day is a day at the beach.

Mythbuster: False! Yes, it is great fun to create a television show and it's rewarding, too, to be a part of the team. However, there are days you will work extremely long hours, even weekends, and it may just happen that everything you've previously worked on is now trashed. So, be prepared to work very, very hard and put in long hours which can be frustrating and fruitful at the same time!

Myth 2: Everyone in television makes a fortune.

Mythbuster: False! Although you can make a lot of money, not everyone earns in six figures. A majority of people working in the field start at the bottom rung of the ladder, interning for free, possibly even making minimum wage just to get their start in the industry. Just as with most other professions, you pay your dues and work your way up. What you make of your career is completely up to you.