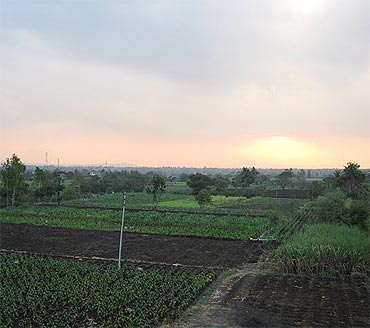 Reader Sujay Ray drove over 5000 km through sections of the Golden Quadrilateral on his two-wheeler over ten days. He shares his experiences with us.

My journey started at around 6 am from Noida. It wasn't freezing but at 70 kmph, it could get very chilly. The thick fog made driving difficult. Two hours, I took my first break at a dhaba in Baniyala, a small village in Rajasthan but was running behind schedule. So the next leg was a three-hour drive at high speeds, 216 km to Bhilwara, where I had my lunch -- some really spicy jumbo parathas with dal. After this was my final lap for the day. By eight in the evening, I had reached Udaipur safe and sound. Next day I head for Mumbai. 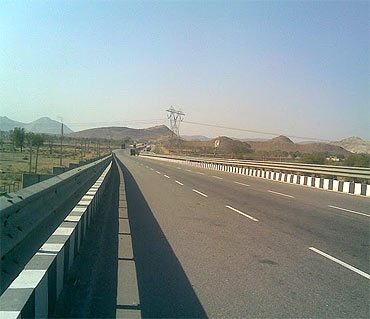 Udaipur-Ahmedabad stretch is 250 km. Drove non-stop to save time. En route I had the yummiest Dal-Bati-Churma lunch. Things began to get difficult from here on. To reach Surat I had to take the double-lane pothole-laden SH3 and SH 60 to reach NH 8. I couldn't travel on NE 1 because two-wheelers were not allowed on this expressway. By 6 pm I was in Surat.

Mumbai was still 300 km away and the stretch was terrible thanks to the construction work on the Gujarat-Maharashtra border on NH8. It was around 11.30 pm when I reached Mumbai finally.

Next day, I cross another state border and head into the south Indian state of Karnataka.

On the Mumbai-Pune Expressway! 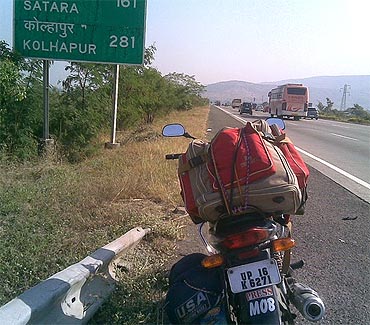 Took the NH4 to reach Pune. The ghat section after Khopoli was dangerous but I drove smoothly on the curves. Then I made a big mistake. I took a wrong turn and landed on the expressway, where two- and three-wheelers are not allowed. Worse, there was no U-Turn to come back on NH 4.

Thankfully a policeman helped me escape fine and I managed to get into the main highway. The drive down the hills on a six lane elevated road travelling in between mountains was fantastic. The expressway is a pure engineering marvel.

Took a short break on the outskirts of Pune. Then took the Satara-Kolhapur section. Here, the roads are smooth and I could consistently drive at 80 kmph.

Not sure when I left Belgaum. But it was way past sunset. The six-lane roads in the ghat section helped me in keeping up the pace. Finally at around 8 pm I reached the small and peaceful town of Hubli.

Next day I head to Bengaluru. 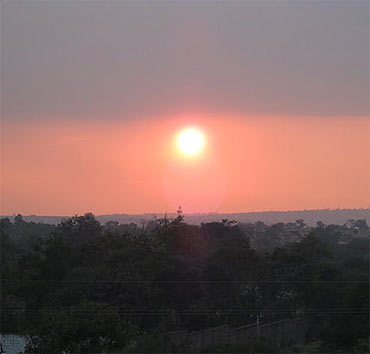 The sun shone brightly and the green paddy fields gave a mesmerizing view. Needless to say the drive down to Haveri was awesome. But a bad stretch was to follow. After crossing Haveri I had to take a detour through the Ranebennur city as the entire highway section was blocked because of the ongoing construction of GQ.

Once I crossed Davangere the roads got better. But there were potholes on the entire stretch so I couldn't really go full throttle.

Took a break at Chitradurga for lunch and from there on it was a smooth ride. Green pastures with windmills on mountains made it feel like I was driving through Europe.

Soon I was in Bengaluru where the traffic refuses to move. Since I had reached the city quite early, I got my bike serviced. Here I got to know that things weren't going too well in the region because of the Telangana issue. They told me to expect violent demonstrations all around Andhra Pradesh and suggested I don't drive further. I was in no mood to take back the same route again. So I decided to head back to Delhi via Indore.

Next day I spent in and around Bengaluru city. 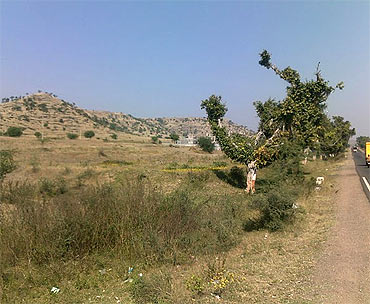 Light day today. After four long and strenuous days, I was free to sleep as much as I wanted to. Around lunchtime I went out to explore the city on my bike. I drove around all happening places in the city. I slept early that night because as the next morning I had to start my journey back North.

I had to avoid the Andhra belt. This meant travelling back to Pune on the same road. This can be boring. Good time for an endurance check, I thought, and drove Bengaluru-Hubli non-stop -- 400 plus km in seven hours.

Took a lunch break at Hubli and started driving again when it started drizzling. This drive was heavenly. Took a snacks break at McDonalds in Kolhapur and finally reached Satara where I spent the night.

Next day, I head to Indore.

Travelling back in time 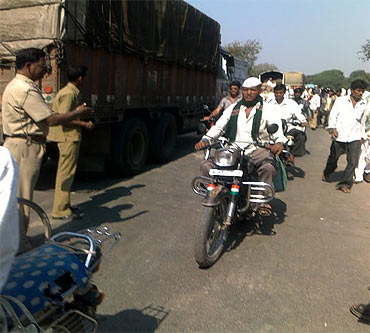 I woke up knowing that the Satara-Indore stretch would be the toughest. After six days of butter smooth highways I was about to encounter some real tough roads.

I reached Pune from where I took NH 50 and cruised towards the holy city of Nashik. The drive through the Deccan Plateau was fun. Dozens of ghats in that section provided perfect opportunity for me to test my corner speeds. Long right-handers and 360 degree hairpin curves make NH 50 a biker's paradise.

Sadly, wasted over an hour because of a kilometre long jam at Sangamner but reached Nashik. From here I took NH 3 commonly known as AB Road (Agra-Bombay Road). I wasn't expecting much from this road. It turned out to be worse. Throughout, I had to travel on a two-lane road.

By sunset I barely reached Nardana and Indore was still around 250 km away.

Acting against all advice, I headed to Indore in the dark. The roads were very bad with hardly any signs of tar, boulders all over the road and trucks flashing high beam at your face from the opposite direction. Surely, it was a journey towards hell.

In the ghats it started becoming scarier. With no population on that stretch it was like driving down a haunted road. Thankfully, last few kilometres were good and I just twisted the throttle to reach Indore before midnight.

The first two days of the New Year were spent exploring the city where I spent the best years of my life. Right from my college campus, favourite food joints, and old hangout places, I visited each and every part of the city. It was like travelling back in time.

Faster than the express train! 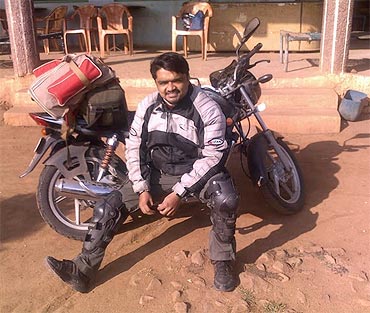 I started the last day of my journey much earlier than the rest. My bike and I had covered over 4000 km so far. This final stretch had to be covered with some amount of caution and appropriate breaks. I realised that with just two 30-minute breaks it was impossible to reach Delhi before 11 in the night, which was like suicide considering the weather conditions.

After I took breakfast at Binaganj, I decided to test my biking skills. From there on I drove non-stop to Delhi, a distance of 600 km in less then 10 hours. This was no mean feat considering the two-lane roads till Gwalior, the 200 km Agra-Delhi stretch in total fog with the last 100 km driving in rain.

I reached home in Noida at 9.30 pm. The next morning I realised I'd covered the Indore-Delhi stretch in about 15 hours faster than both the Malwa and Dehradun Express trains!