Sign in  |  Create a Rediffmail account
Rediff.com  » Getahead » 'That marketing is only for MBAs is a myth'

'That marketing is only for MBAs is a myth' 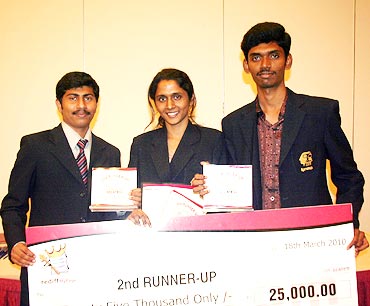 The contest was rediff.com's initiative to encourage students to explore social media techniques to make a difference to an initiative in their institute. The participants were required to create a Page on an initiative of their choice -- it could be a page for their college, or their department activities, or even their sports teams or bands, maybe even the social causes supported by their institutes and so on. The content ran for two months during which students promoted their page, gathered followers and made an impact to their chosen initiative. The top ten teams were called for a presentation. They were judged on all aspects -- their page performance in terms of the number of followers, the activity and interactions on their page, the reach through various promotions they made to the page, the diversity of the media they used to communicate, the future plans for their page etc -- overall the holistic approach and the difference made to the initiative.

The top three honours included a cash prize of Rs 1 lakh for the winner and Rs 50,000 and Rs 25,000 for the first and the second runner-up respectively.

At an event held in Mumbai on Thursday, the three winners walked home with super-sized cheques and smiles on their faces.

We spoke to the three winning teams and their endeavours:

A Week without Mobile

With over a thousand followers, A Week without Mobile was created by Catherine R, Daniel V and Doni Cherian, students of the Karunya University from Coimbatore. They were the only non-B school students. The team finished third in the contest and won Rs 25,000.

Catherine tells us that the idea behind creating this page to make people understand the importance of their mobile phones. She says, "The topic is universal because a lot of us have a mobile phone and take it for granted. We chose this topic also because we were looking at a very wide base of potential users."

Catherine continues, "We promoted this page online as well as offline. At Karunya we have an intranet connection. We used that to the fullest sending IMs to all users among other things. But it was when we were preparing for our exams that we realised we had to take it offline too. So we printed out posters, cards, A3 size ads and placed them on notice boards, benches and even in busses and on taxis. This helped us gain visibility."

We are planning to make and market t-shirts of the page, promote it heavily during out cultural festival as well as hoping to create various applications such as games that can be played on the intranet as well as online.

Prerana Nayak, Associate Director, Product Development, rediff.com, who was on the panel of judges says, "Karunya was the only technical or non-B-school team and their effort was so very genuine. The honesty in their work, the extra-ordinarily innovative page promotion techniques, consistency in their performance made them an easy choice of all three judges. 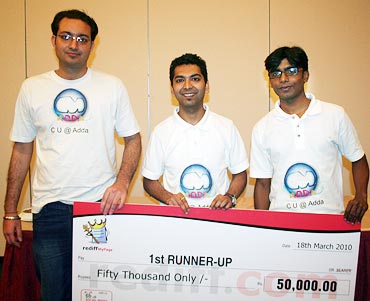 Marketing Adda so far has a registered follower-base of over 1,100 people. The creators of this page are Sanjeev Raina, Sumit Kakkar and Ravi Kishore students of Lal Bahadur Shastri Institute of Management, New Delhi. The team finished second in the contest and won Rs 50,000

Sumit Kakkar tells us that Marketing Adda is a page that hopes to reach out to everyone interested in marketing.

"You could be a student, a professional or even a housewife. Marketing Adda is where we'd like you to share your opinions and comments," he says adding, "Through this page, we hope to break the myth that marketing is only for MBAs as well as offer infotainment through pictures and videos."

Kakkar says, "Online, we plugged the page heavily on Facebook and Twitter. We also sent out over 20,000 e-mails to our contacts and alumni. We also approached corporate houses and news channels, even though the latter did not really work out. Most importantly, we created contests and gave away cash prizes to the winners. Offline, we made posters, t-shirts organised quizzes and tried to generate curiosity about the page by interacting with people and telling them what it was all about."

"The idea eventually is of course to generate revenue from this endeavour. But we also hope that the page becomes a hub for all marketing clubs across all B-schools and corporate houses. We also plan to organise group meetings and register our logo," Ravi Kishore says with a smile.

"They had the highest number of fans and used innovative ways to promote their page. They truly consolidated knowledge from all over on their page making a difference to their chosen topic. It's one of the teams who came in from behind and conquered with a brilliant effort of online and offline combined," Nayak writes. 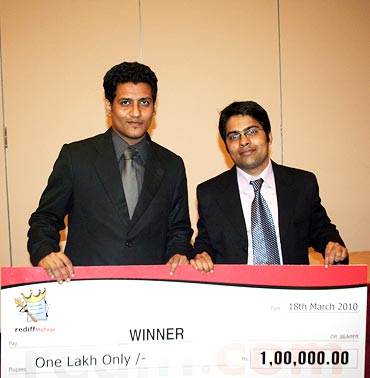 With over 742 users, JBIMS and MAH CET 2010 did not have as many users as the other two winners. However the practicability of the page and the activity on it has indeed been very interesting. The page was created by Dishant Shah and George Mathews from Jamnalal Bajaj Institute of Management Studies, Mumbai.

George Mathews tells us that the JBIMS and MAH CET 2010 page was a one-stop shop for CET and JBIMS aspirants. Mathews says, "The page gave tutorials from application processes to what you can expect during your GD and PI sessions. It gave a run-up to the CET and also spelt out the strategy to crack the CET through videos and blog updates."

How they promoted the page:

He continues, "After the CET was over, we also organised chat sessions and an analysis of the CET. We went outside centres and got students to sign up for our page. A lot of our batchmates helped us put together this page. We had a topper from JBIMS speak about his experiences, motivational videos from students and professors among other things. We also provided material to students who in turn referred us to their peers. Moreover we had educational websites providing us link backs, which helped us quite a bit."

"The plan is to take the activity offline. We have already organised a meet once and on request uploaded videos of the meet on the page. We hope to make this more regular and also focus on developing soft skills. The next step is also to conduct mock GD and PI sessions and focus on outstation candidates who find it difficult to access latest study material," Mathews says.

Nayak says, "They were amongst the best right from start -- they used all social media techniques as well as offline promotion. They made a difference to their initiative by offline meetings as well. Their consistency and regularity on their page, the relevance of the content, the diversity of the media and the overall page promotion effort got them the first prize."