'The workplace is an unending source of humour' 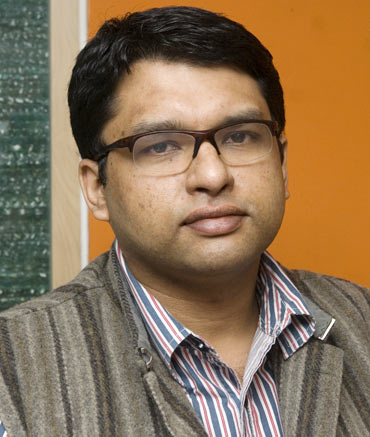 Abhishek Mande
Sidin Vadukut, author of Dork, The Incredible Adventures of Robin Einstein Varghese, a funny work of fiction about the world of management consultants, among other things, speaks about his first novel and the central character he wants to take places.

There is something extremely funny about Sidin Vadukut's Dork: The Incredible Adventures of Robin Einstein Varghese. Vadukut, who is a journalist and an avid blogger says he wrote it in a matter of a few months and the cover is as amusing as the book itself. Bright post-it yellow, Dork shows a man trying to peek over an office bay with a bunch of telephone numbers stuck to his soft board. (We called up the two numbers. They don't exist.)

In between these cheeky covers is a secret and hilarious diary of a fictional character called Robin Varghese, a bumbling management graduate who becomes an unlikely hero for the corporate world. Read excerpts from the book here!

Vadukut spoke with us over the phone about how he got to the end of this incredibly funny book and how irony as a style is not always appreciated.

Edited excerpts from an interview:

Did you always wanted to write this kind of book?

Well I did try to publish a book before this. It was a collection of some of my blogposts, columns and article. I thought it would be a great idea but the publisher asked me why would anyone pay to read something they could get for free online? Of course I was heartbroken but it made sense and I wondered why I even tried to select those 30-40 pieces in the first place!

So anyway, the editor suggested I should write fiction. I told her that I couldn't write fiction, in spite of being a journalist. Eventually of course, I put myself to it and here's the book.

Do you think irony as a style works in India?

The Brits love irony. But in India we don't always appreciate it. In fact we don't even get it immediately. We like to take things very literally. The comments on my blog are a good indication of it. People don't get a second layer of meaning. Sometimes they don't get the first layer! The problem with irony in India is that you need to tell the audience that you are now being ironic. On television shows you have things like a drum roll that prompt people to laugh. Irony is not really ingrained in our culture. So yes, you will be alienating a good lot of the audience. Easing people into irony can be quite challenging.

How did the central character, Robin Einstein Varghese, come about?

I always wondered if there was a person in this world who went by the book and wondered how he'd fare in the real world. Robin is that guy and the book is an insane working of his mind. The guy is always on some sort of a substance abuse, never down and out and always on a high. That was a challenge in a way because I had to really try hard to not lose the voice. It's easy to slip out of a character like Robin because you come back after a long day's work and you have to start writing about this fellow. But eventually Robin took a life of his own. His family, workplace, career everything fell into place.

What about the book? Was that always on the anvil?

I write about workplace situations and have always found them to be an immensely rich source of humour. Stuff that happens by the fax machines, the time it takes to get a set of new pencils because there is cost cutting happening. We spend one-third of our lives in these places that provide never-ending humour and absurdity, which we condone. I can off the top of my hat think of three really funny things to do with the coffee machine!

Really? What are they?

I'm saving them up for the next books.

'Cross-cultural humour is dying to be explored' 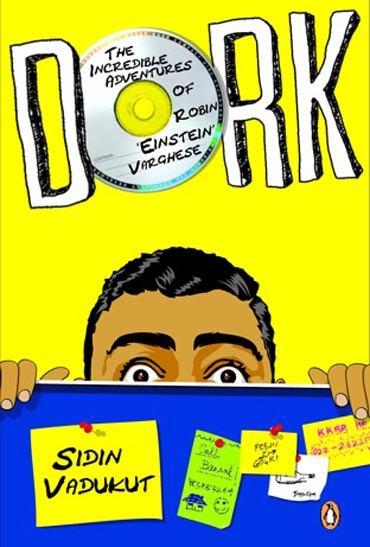 How did you create the situations?

There is no real answer to that question. But overall I knew that there would be some 30 situations Robin would be in. Of these, most would be in the office, a few outside of his workplace and some would be romantic situations. The first half was more free-wheeling than the second one. Towards the end I started working backwards and started breaking up his life into episodes, with each scene achieving a certain thing and then leading into the next one.

And the one episode you enjoyed writing the most?

Talking about your plot, seems like Robin forgot to pay his broker Bansal. There's no mention about it in the book.

Well things in his office got so much momentum the broker bit got left out. But let's just say Robin transferred the money to Bansal's (the broker's) account and forgot to write about it!

About the cover, how did you manage to get Dork across to Padma Laxmi's ex-husband's hairdresser to read?

(Laughs) Well the cover took a long time to happen and we needed blurbs. There was no way we could have got real ones in time for the cover. So we went with the idea of fake blurbs. As it seems, it has worked! Because people came up to me and told me that if the blurbs are fake, the inside must be real. Some others told me it was a great take on the whole blurb trend.

But did you intend any profundity?

None. Whatever profundity is there in the book and the cover is completely unintentional.

Over the last year and a half I've stayed away from all humour and office-related books because I did not want something to subconsciously seep into my writing. Currently I am reading a lot of non-fiction because the long-term plan is to write a work of non-fiction involving military history and travel research.

What was the wife's reaction to your book?

I think she's quite sick of all the jokes. She's read it some nine times already because she usually proofreads everything I write. I would send her chapter after chapter. She'd read them and give her feedback.

Do you watch comedy shows on Hindi channels?

Yes I do. Sometimes I find them funny. At other times I get sick of them. There is nothing such as good humour or bad. It's very subjective and it's okay if someone's making money out of it.

Where does Robin go from here on?

Well anything could happen. The idea is to get him to the CEO level and take him to different industries. Maybe he could end up becoming a politician. The idea is also to take him out of the Mumbai setting, maybe take him abroad somewhere. Cross-cultural humour is dying to be explored.