'India's youth can make her a global superpower' 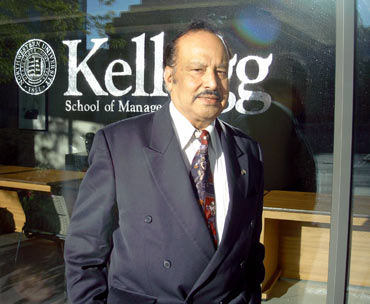 As a teenager Bala Balchandran argued with his father over why he did not want to become an IAS officer and why he wanted to go to the US to pursue a career in academics.

"While IAS was a good alternative, a politician, who may not be as smart as you are, would always be your boss and you will have to do whatever he wants you to do," he would counter-argue. Bala, now J L Kellogg Distinguished Professor of Accounting and Information Management Northwestern University, told rediff.com over the phone from Chennai recently.

Bala -- his students fondly address him as Uncle Bala -- finally reached American shores in 1967 on a scholarship to the University of Dayton to do his engineering masters in industrial operations. From there it had been a fruitful and satisfying journey as he went on to teach at Carnegie Mellon University, Pittsburgh, where he also did his doctorate and to Kellogg School of Management.

Earlier, after completing honours in statistics Bala began his teaching career with Annamalai University from where he had graduated earlier. A bright student throughout his academic career, he completed his PhD from Carnegie Mellon University in two years instead of four. He won a gold medal for his thesis --"Nobody got (a gold medal) in Carnegie Mellon before me or after me and until today," he told rediff.com.

Bala strongly believes that what India today needs is a youthful leadership as older people don't fit into scheme of things. "India's youth between 25 to 45 years of age should take charge of the country's destiny," he says.

Bala discussed his life's challenges, achievements, ambitions, inspirations, success mantras, what he thinks about India's youth and why top-rung foreign schools and universities will never come to India with Prasanna D Zore.

"Harvard will not establish a school here (in India) no matter what," he said.

Yes. Actually, my father wanted me to go for IAS. I wanted to be totally independent and the job of a professor allowed me to remain independent.

But in between I was a second lieutenant of the National Cadet Corps because I am a very patriotic Indian. When the Chinese attacked India in 1962 I had decided to join the Indian Army without telling my family. So I worked full time as a Captain for two years managing a battalion from 1965 to 1967.

Then in 1967 I got my scholarship to go to the US to do an engineering course in industrial operations. I took advantage of this opportunity and went to the US.

What challenges did you face when you first landed in America as a student at the University of Dayton?

Fortunately or unfortunately I was married. I had a one-year-old child when I reached there at 28. The money I received from my scholarship was good only for one person so I had to leave my child and wife behind in India. I wanted to establish myself before I could bring them to stay with me.

Later I got a job as an assistant professor in industrial and systems engineering, after finishing my masters in engineering at Dayton. This additional income allowed me to bring my wife there. But as she wanted to do her MS in Biology in US we decided to keep our son back in Chennai at his grandparents' house for some more time.

After I went to do my PhD at Pittsburgh and by when my wife finished her MS, we decided to bring back our child to US when he was 5. At least one parent was in a position to look after the child then.

'I wanted to go to an underdog and make it big' 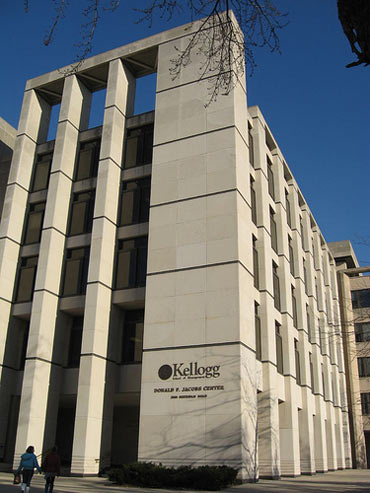 Did you face any kind of racial discrimination in 1967 in the US?

None whatsoever and at Carnegie Mellon I got the gold medal -- in itself a world record. The Operations Research Society of America evaluated my PhD thesis along with several others for the first three prizes and my thesis got the first prize. Nobody got it in Carnegie Mellon before me or after me and until today.

Who inspired you the most in your life? What values did your parents inculcate in you?

My mother, who passed only fifth grade, is my biggest source of inspiration. She taught us to become somebody in life and she knew I could do it in life. She had predicted long time back that I would be a king one day. She helped me motivate myself in achieving and fulfilling my dreams.

Also, there were some of our rich relatives who gave us second-class treatment that made her cry and suffer silently. When I asked why she was crying she told me that if ever I become a big man I should not treat my fellow Indians like my relatives treated us. She inculcated in me the value that every human being must be treated equally. That has left a deep impact on my mind.

She also taught me that to achieve success in life you don't need to cheat, undercut somebody or employ corruption. You do honest work, put all your efforts in it, and you will have achieved success, she always etched this in my mind.

'India's youth can make her a global superpower' 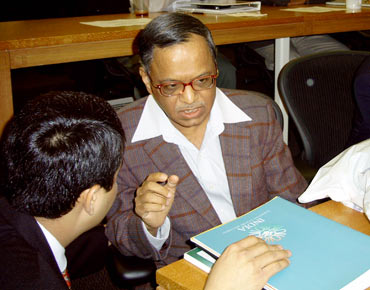 Image: Infosys' N Narayana Murthy at one of Kellogg's conference

You have been with Kellogg's School of Management since 1973. Has this journey been fruitful and satisfying for you as an individual and an academic?

Absolutely, it was very satisfying.

Because of my record I got calls from University of Chicago, Northwestern University and two other schools gave me the posts of associate professor. Harvard and Stanford gave me assistant professorship. I didn't choose Chicago because the university was located at a very unsafe place and I had two children at that time. At that time Chicago University was rated at number two next only to Harvard but I decided to choose safety of my children.

Also, Kellogg's at that time was somewhere at the 11th place. I wanted to go to an underdog and make it big rather than go to an established place and contribute nothing much. Soon after I joined Kellogg's I was made the chairman of the strategic committee because my dean had so much trust in my abilities. He challenged our team to take Kellogg's from number seven to number one.

Everybody says India's young demographic profile is her biggest asset. What kind of role do you envisage for India's youth in shaping the country's destiny in the 21st century?

I think India today doesn't have place for older people as leaders. India's youth between 25 to 45 years of age should take charge of the country's destiny. Having said that one must appreciate the phenomenal job done by Dr Manmohan Singh (India's finance minister in 1991) in revving up India's economy along with the former Prime Minister Narasimha Rao and P Chidambaram by liberalising and opening up India's economy.

This brought us to compete with global companies not only in India but on their own home turfs as well. But now it is time for the next generation to take over because politicians and bureaucrats have become corrupt. If the country's youth are able to do their job honestly and adhere to the ethical values that our forefathers taught us -- and this is what I teach my students too -- India's name will emerge amongst global superpowers.

My students address me as Uncle Bala and which I love because I believe in having personal relationship with my students. I don't want it to be just give and take. Then it would be like any other need-based financial transaction. Once the transaction is over we don't bother about each other.

'Harvard will not establish a school here, no matter what' 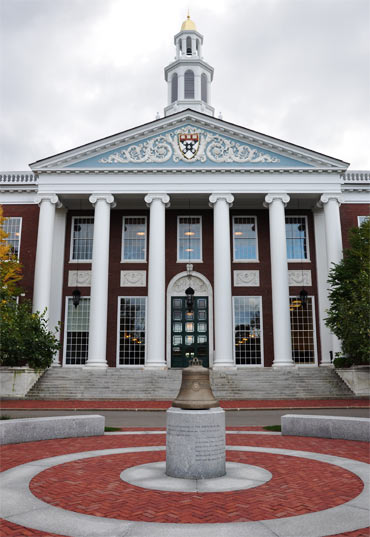 How will foreign schools and universities setting shop in India help Indian students improve upon their knowledge and skills?

Though Kapil Sibal's idea of opening up the country to foreign schools and universities is a very good idea unfortunately I feel only the second-rate schools will come to India, except one or two prestigious ones.

So if you think that you can stay in India and get foreign education, which is one possibility which will be there, that's fine. But if it is a second-rate school and you are good to go to the US with scholarships then I think you must go to US for higher studies.

I do feel some top quality students probably from the IITs and IIMs should go to US or wherever that particular discipline of their choice ranks first. Similarly, those students who are not so good and still want to have foreign school education can study in India's foreign schools.

So I'd want a parallel path of providing opportunities of international education on the Indian soil, at an Indian price but at the same time if somebody gives you a scholarship to study in a foreign school outside India then why not take advantage of it. So I'd want a global mindset with Indian roots.

Why would you think that top-rated global universities would not come to India?

The logic is very simple. First of all, if you are going to rule that such schools and universities will be not-for-profit organisations and don't allow these schools to take profits away where they cultivate infrastructure then they will not come.

Secondly, the reason anybody is coming here is not for money but for Indian faculty highly esteemed in western countries. There are some fundamental things that our bureaucrats do not understand. The real boss is the faculty because of the power they wield. They can remove a dean but not vice versa.

But the Indian faculty may form just 10 per cent of such foreign schools in India while the rest will be from US, Europe, South America, east Europe. These faculties will think why should we go to India if we can't send profits back home. Why not go to Europe or South America where we can send money back home. What is so peculiar about India?

I think you have to allow the principles of free market rule if you want best global schools and universities to come to India. Of course, the communists will object.

I applaud and admire the courage and determination of Kapil Sibal and Dr Manmohan Singh and other good leaders in India. But at the same time if you open up the education sector in India with your hands tied in shackles you are not going to get the best cream of the crop.

For example, Harvard will not establish a school here, no matter what. So I think either you do it fully or don't do it at all.