'The only democratic tool of empowerment is education' 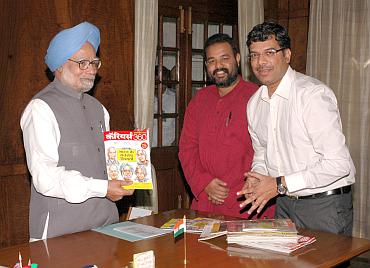 It was neither by choice nor design that this investment banker, company secretary, chartered accountant and cost accountant became the publisher of one of India's most respected magazines.

"It was fate," says Maheshwer Peri, publisher of Outlook and Careers360, who had joined Hathway Investments, an investment management company, as an investment banker. But when the first publisher left the group in 1998 the company management thought that Peri could successfully guide the magazine's growth.

An average student till he was in Class X, this commerce graduate from a government college in Hyderabad, "became the apple of everyone's eyes" when he took one of the top three slots in his first college exam. He recalls that it was his grounding and the environment around him at the government hostel in this college that toughened him and gave him a bigger perspective about the need of a social connect for any big business to grow and prosper.

"What I am today is because of education and hard work," says Peri, when quizzed about his mantras for success. Hard work made him top the chartered accountancy exam, considered one of the toughest competitive exams in India.

In 2009 Peri became an entrepreneur by founding a publishing company, Pathfinder Publishing, which publishes Careers360, a classy and informative careers magazine for India's young people. He launched the English edition of Careers360 in 2009; this year he launched the Hindi edition for those who don't communicate or understand English but yet want to empower themselves with credible information about career opportunities.

Peri spoke to Rediff.com's Prasanna D Zore about his career and listed the dos and don'ts young entrepreneurs could follow.

What values did your parents inculcate in you?

Parents can inculcate good values in you only up to a point. They can tell you to be truthful, work hard, remain honest. But ultimately you need to motivate and inspire yourself.

While I studied in a government college I stayed in a hostel. There I'd see students not going back to their homes because the bus fare would cost them 10 bucks. This desperate need of some people for some of the things that we actually enjoy and don't bother about it had an impact upon me.

If that is what life is, then you need to take care of it and nurture it more than anything else in life.

I always tell people to value what they have and just be true to their own being. I learnt not to be afraid of anything, intimidated or bullied by people who do wrong. If you think you are right on a given issue, then simply follow your honesty.

Till I passed out of Class X, I was a 60 per cent kind of student and would rank 10,000th or 20,000th in my school :-) Then I joined a college in Hyderabad where I was the only student from the English medium. And somehow I managed to be in the top three in the first exam.

From then on I had to keep up to that because people started expecting more from me. It was a turning point for me.

Call it fate or fortune, but I joined a college where suddenly I became the apple of many people's eyes.

Was it too difficult handling this sudden transition?

It was difficult because what you were not used to do -- which is working hard -- you had to do because of the weight of expectations. I had to work hard because I started enjoying the attention, the pampering that followed because of my academic record.

You might say that you have lost your freedom, but you don't really regret that.

'At Outlook or Careers360 we never compromise on editorial content' 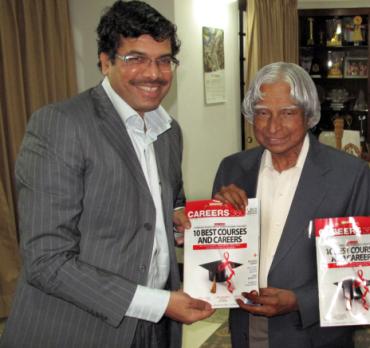 From an investment banker to a publisher... what explains this career change?

It was neither by choice nor design. It was again fate. I joined Hathway Investments, an investment management company. As part of Hathway I started handling Outlook (the magazine) as a backroom person. When the first publisher (Deepak Shourie) left within two-and-a-half years the management felt I was ripe enough to jump into the shoes and start managing the entire thing myself.

It happened by chance, but I don't regret it one bit. I actually had opportunities to move into investment banking but from the background I came from where I had seen students save 50 paise in the hostel environment I realised that through Outlook and publishing I could be a bigger social change agent than being an investment banker and help people make money.

And these things I can do as a media publisher which I could not have done as an investment banker.

What are the day-to-day challenges that you face as a publisher?

Without compromising on the story?

Absolutely. At Outlook or at Careers360 we never compromise on editorial content and stories. People will talk what they want to. We are living in a world where people will always see what is the motivation (for publishing a particular story). But the important thing is truth is your ultimate defence.

If a story is true and helps a larger social cause your motivations can go to hell.

Why did you start Careers360? Did you see a market for such a magazine?

There were two reasons: One is emotional and the other is rational.

Sometime in 2005 I had a father come to me and say that his son studied at a ranked institute, which guaranteed 100 per cent placement, but his son couldn't find any placement after the course was completed. Later he enquired and realised that there was a serious problem with the institute.

I studied at a government college and saw how students empowered themselves through education. For instance, from my college about 20 IAS officers, 30 doctors and 50 IITs could have come because they all believed in the power of education. The pupils there belonged to the middle class or lower middle class kind of families. But the way they grew and made something of their lives has always inspired me.

It was there I realised that the only democratic tool of empowerment is education. And if you can cater to them by giving good, solid, actionable and credible information then you actually empower lots of lives.

And here is the rationale: Now there are more options. When I was studying there were only about 10 streams like medicine, commerce, engineering etc. But today you have 100 options. And within each option you have 50 choices. This empowers the students to start exercising their options and start enjoying the subject that they would want to learn. Earlier students did not have so many options to choose from.

So that creates a need and hence a business opportunity. But this opportunity can only blossom if you provide students with good, solid, actionable and credible information.

How successful has Careers360 been in empowering students in making the right choices?

Reasonably successful till now, but we have a long way to go. I can measure this success from the kind of response we get from parents and students. When we started the English edition of Careers360 we set ourselves a target of bringing out the Hindi edition within one year and have managed to do that.

And the best part of the magazine is the people who are associated with it. Dr A P J Abdul Kalam launched our English edition. I didn't want anyone else to launch it. And we wanted Dr Manmohan Singh to be the first person to receive the first copy of our Hindi edition.

Finally, it is the integrity, credibility and character of your product that make people like Dr Singh and Dr Kalam associate with its launch. I think our readers too have seen the seriousness and integrity of our product. And whenever we put our stories on the Web they get a very good response.

It gives me satisfaction to see a great connect between the reader and my magazine. 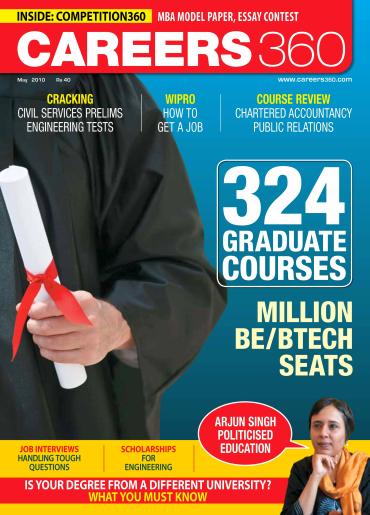 How is your Hindi edition doing?

It's doing very good. If you see the price of our Hindi edition (Rs 15) is less than half the price of our English (Rs 40) one. But then the rationale here -- because I am also a businessman in certain sense -- is that there is no content creation cost. It's only translation cost.

In the recent past a phenomenon has emerged where education is looked upon as a commodity. What's your opinion on the quality of education that Indian students get in India and how would it change once the foreign schools and universities establish themselves in India?

Till 2008-2009 you had lot of people profiteer out of the opportunity called the need of the students and the parents.

India is a country where parents would sell everything they had to pay whatever to get their child into a good educational institute. And that's what some of these institutes got into this business to use it as an opportunity to exploit the average middle class Indian.

I know people who have sold their land or home to finance their child's education. But (these parents) later complained that their children couldn't get a job.

However, in the last one year a lot of things have changed. May be because of us (Careers360), may be in spite of us. But lot more probity into education, which did not exist before 2008-2009, has come back. And when people ask for probity, ask tough questions of these educational institutes the quality of education is bound to improve.

Foreign education is important to a limited extent. It will open up doors for competition. It will also prompt the established ones to change things for the better. This entire hoopla about foreign education is not going to take away more than 10,000 seats.

But what it will do is it will open the eyes of many of the Indian institutes in how to conduct the business of education ethically. It will also tell them how to do academic research. Basically it is the competition that will benefit Indian students.

In my perception 50 per cent of the students who would have gone abroad in the absence of foreign schools will stay back once they set up shop in India. Having said that let me also point out that the demand (for good educational institutes) is so huge in India that whatever the number of foreign schools that come here they won't be able to absorb even three per cent of Indian students.

What qualities does one need to become a successful publisher?

So if you want advertisements you need to take good care of your readers first. But no big player in this business will compromise for the heck of it.

You must be true to yourself.

You need to have some kind of a will to contribute to people around you to help them to make something out of them and draw some satisfaction out of them. If you have these qualities then you will be good at anything.

If I as a CEO strive to bring smile on the face of my employees and if they realise that then they will work harder and deliver better for me.

With the launch of Pathfinder Publishing you have become an entrepreneur now. Can you gives some dos and don'ts for young entrepreneurs?

Look at an opportunity that can be nurtured, grown and everybody shares benefits out of it over a longer period of time.