My feat no better than others: Youngest IIT topper 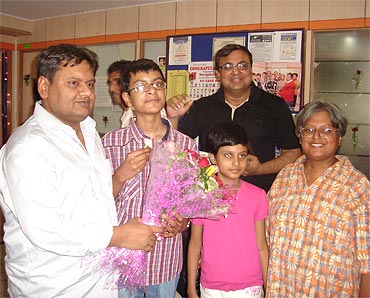 It's not just his age.

Or even his astounding achievement.

The fact that his mother, bravely took a decision to bypass the traditional Indian education system, and homeschool her son, to guarantee him the best opportunities, is especially impressive -- a decision vindicated by Sahal's extraordinary talent.

Even more impressive is 14-year-old Sahal Kaushik. His modesty floors you, much more than his achievement.

He is the youngest Indian to crack IIT JEE, considered one of the most prestigious competitive exam in India but merely offers, "I do not feel that my achievement is in any way better than others (who gave the IIT JEE).

"Others also know what I know," says this Delhi topper and 33rd ranker about his feat at such a young age.

Sahal seems to have inherited this humility from his mother Ruchi Kaushik, who sacrificed her career as a doctor to supervise Sahal's education -- a decision for which she was criticised by people outside her family -- after she realised her son's talents when he was just three.

Interestingly, Sahal scored only a modest 78 per cent in physics, chemistry and math in his Class XII board exams which brought as much happiness to the Kaushik family as his IIT JEE achievement.

"Some (children) have to strive harder than then he (Sahal) did," Ruchi says in response to whether homeschooling is better than traditional classroom education. "We must appreciate those children as well," she says.

Sahal and Ruchi spoke to rediff.com's Onkar Singh on a range of issues relating to Sahal's achievements and how she came to her decision to homeschool her son.

What are your plans now? Where will you apply, what will you study? What are you looking forward to the most?

I will study Physics at IIT Kanpur. I have still not made up my mind as to what I am looking forward to.

What job/profession do you want to pursue?

I want to be a research scientist in astrophysics or physics. I was always interested in astronomy. Perhaps that is the reason why I am leaning more towards astrophysics.

What inspired you to take the JEE?

JEE tests your analytical and IQ skills. It also tests your speed and mental calculations. I found these aspects very interesting. Also, I never wanted to achieve something like climbing the Mount Everest like Arun Vajpai did :-).

How many hours did you devote to IIT JEE preparation every day?

I never studied more than four to five hours a day and that too not at a stretch. I study for the love of the subject. I love challenging problems. Besides studying at home, the instructors at the Narayana IIT Academy, Dwarka, would individually coach me and keep me on track for the IIT.

I always felt that home schooling gave me the freedom to explore any subject to any depth that I wanted. I had the flexibility of schedule to study any subject for whatever time I wanted. My mother would spend time with me and I could ask any number of questions that I wanted to know.

You studied at the Narayana IIT academy Dwarka. What was your experience like?

It was a good experience. My teachers were affectionate and they treated me like their younger brother. I had no hesitation in saying that I did enjoy studying at the institute. I do not feel that my achievement is in any way better than others. Others also know what I know.

How did you fare in Class XII? Were you and your parents happy with the results?

I got 78 per cent marks in physics, chemistry and math. I and my parents were very happy with it.

Who are your inspirations/idols? Do you also play any games?

What do you do in your free time when not studying?

I listen to music, read historical books and work on the computer.

'I was not worried by Sahal's Class XII result' 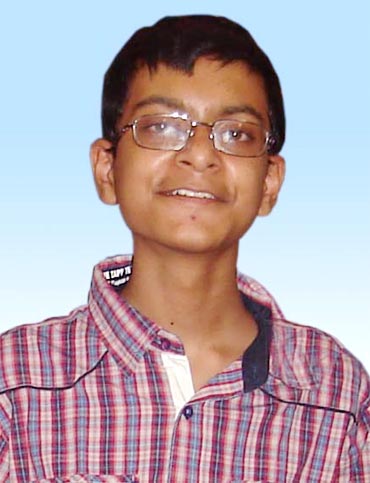 Ruchi Kaushik is elated that her son is the youngest Indian ever to crack IIT entrance examination at 14.

" I am delighted with his performance in the IIT JEE which I feel was attained with the least amount of pressure and effort. That speaks volumes about Sahal's ability to compete at the highest level," Ruchi told rediff.com. She talked at length about her decision to home school Sahal than send him to a regular school.

What made you take the decision to home school your child?

Sahal was about two to three year old when he could spell five to six letter words; he knew addition, subtraction and multiplications. This surprised me a little because he was far ahead of children his age group. This made me realise that if Sahal went to school he would regress rather than progress. That is what forced me to home school Sahal.

When did you decide to take such a brave decision?

I personally do not feel that this was a brave decision. Rather it was fulfilment of my child's requirements and that was needed to make Sahal bloom and flourish.

Was there no opposition from family etc?

There was no direct opposition from the family or friends but apart from our immediate family nobody really agreed or believed in my decision. My husband Colonel Tapeshwar Kaushik wholeheartedly supported my decision.

How did you go about it, did you have a plan?

The home schooling was more open and flexible. I had no structured plan to follow and it changed with the time, Sahal's interests and requirements.

Did you have a daily routine, what was his and your day like?

I never had a daily routine. I am doctor by profession but I left my practice when he was just two. Since I was at home I could devote more time with Sahal and both developed better understanding for each other. That's what helped in the end.

Do you think home schooling is better that traditional classroom education?

I personally think that both systems have something to offer and there are some drawbacks as well. It varies from person to person as to what suits them. Every child is not Sahal. Some have to strive harder than then he did. We must appreciate those children as well.

Weren't you concerned when your child was not performing well in school and board exams? Especially since 90 per cent plus marks is the standard of most IIT aspirants?

No, I was not worried because the pattern of answering required for the two exams was totally different. CBSE requires more of step-by-step written answers while IIT requires more of mental speed calculation, which Sahal is very good at. However both do require clarity of concept.

What advice/ tips would you give to parents who want to home school their kids?

Home schooling requires lot of time and devotion and patience. It is a 24-hour job with no breaks. You have to ensure that you do not lose your cool as the child asks question after question and you got to answer them with the best of your ability and make him understand that as well. Sahal was good to grasp the things in no time.