Why a Buddhist priest is studying MBA 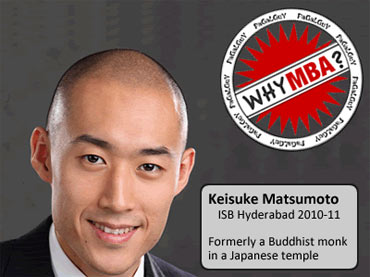 Corporations and temples have a lot in common, believes Keisuke Matsumoto, a student at the Indian School of Business (ISB), Hyderabad.

A participant in the PGP batch of 2010-11 at ISB Hyderabad, Keisuke Matsumoto spent the last seven years as a Buddhist priest at the Komyoji Temple in Tokyo. He plans to use his MBA education to upgrade the way Buddhist temples work.

"The only thing that differs between a corporation and a temple is the objective. For corporations it is profit and for temples it is the happiness of its followers," he says.

Keisuke is a graduate from the University of Tokyo, with honours in philosophy. Soon after his graduation, Keisuke like any other youngster started to evaluate the various options he had. "Joining the corporate world, becoming an academician and several other options were on my list. But I finally decided to devote myself to the Japanese tradition and philosophy," Keisuke says.

"Like in India, the Japanese also have families that run temples for generation after generation. I do not belong to a temple family, but I found my inner calling and followed it. My family too supported me in this decision," he says. Keisuke belongs to the Jodo Shinshu sect of Buddhism.

The journey from the university classrooms to the life that he had to lead to become a priest was tough for Keisuke.

"To become a Japanese Buddhist priest, I spent close to six months in the headquarter temple at Kyoto, leading a very strict and disciplined life. After that I was working in my temple in Tokyo and lived with the head priest's family," Keisuke says. Keisuke conducted ceremonies and gave Dharma teachings independently to the members of the temples.

'Asian countries are going up the ladder' 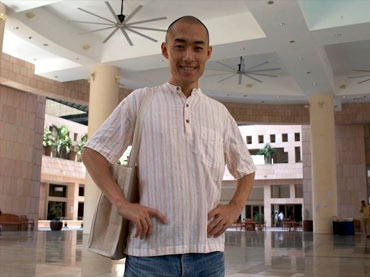 But why an MBA, I ask. The young priest answers, "Temples need management too." He continues, "Seven years of working in the temple taught me that simply attracting people to the temple is not enough. In this modern age, I wanted to explore the real role that temples could have for people. I needed to understand what should temples offer to people. I needed to acquire good management skills to lead the temple."

As a young priest working in the temple by choice, Keisuke dedicated a lot of time making young people come to the temple. "My temple in Tokyo is situated in the heart of the city, surrounded by numerous corporate offices. I used to often see many young men and women pass by. Like youth in India, even the Japanese think that temples are conservative places and do not usually not appeal to them," he says.

"As my first initiative, I launched the Young Buddhist Association with the help of my college friends and as one of our first activities, we hosted a music concert in the premises of the temple. Then I started noticing youth even more, observing what they do and what they enjoy. Spending time in cafes was another thing that they enjoyed, so we launched a cafe in the temple. We asked young people to just come and spend time there. Even with a small menu of drinks and desserts, all on the house, the place was a hit. In return we asked the visitors to donate money to the temple," Keisuke recalls.

So, why India for management education? Keisuke says, "The US is the first destination that comes to mind when it's about management education, but I chose India because it is the land where Buddhism was born. Also, the Asian countries are soon going up the ladder and I did not want to miss the action." 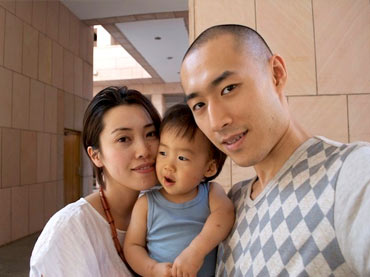 The interview that Keisuke had at ISB was not a long one, but he recalls that it was all about religion and the activities he did when in the temple. The interview lasted a little over 20 minutes.

After joining ISB, he has even conducted some sessions for his colleagues at ISB, talking about his work. Keisuke, lives on campus with his wife and two-year-old son Koga, an alternative name of the River Ganga from ancient Buddhist scriptures.

"While I am here, I also take every possible opportunity to understand Hinduism and travel extensively in term breaks," he says.

Though Keisuke dresses like any other student on campus in jeans and t-shirts he still finds time to devote to his daily chanting and other religious rituals. The only time he dressed in his tradition temple clothes was at the end of their orientation week, where the batch had to put up a programme.

He is majoring in Marketing and Strategy, both of which he feels, he would need for managing his temple better.

'My teammates and I have healthy arguments' 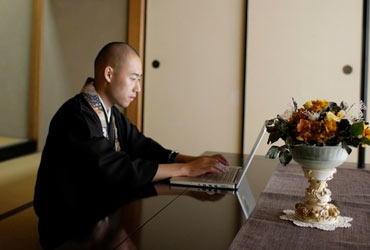 Everything that I hear in class or discuss with the study group, I try to put in the context of the temple. My purpose to be here is to understand all that is happening in the corporate world, so that religion can be made contextual. Religion and corporations may be conflicting ideas, but since Buddhism does not allow conflict, my teammates and I have healthy arguments. All of them come with considerable amount of work experience," laughs the young priest.

After graduating from ISB Hyderabad, Keisuke would like to work in a larger perspective by joining the temple management of the headquarter temple in Kyoto and managing the assets of the temple better.

He also plans to design a training module for priests at his temple so that that they know what's going on in the modern world beyond the boundaries of their religious training.