Travel: Egypt, the Pyramids, Sphinx and the river Nile 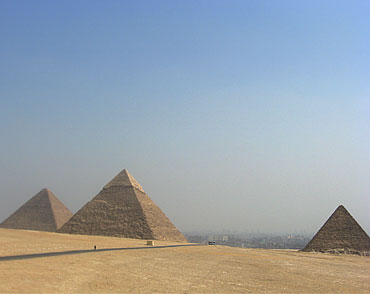 Ever since I first learnt of the ancient Egyptian civilisation back in school, I have had the desire to visit Egypt. More recently, as my kids started learning about Egypt, I decided to visit this rich and ancient land with my family.

And so we embarked on our journey. I was told about the bakshish (the same word that we use in India) culture and paid a lump sum to the travel agent together with the advance, to be used for tipping at each place we visited.

As our plane approached Cairo, I looked out and noticed mud-coloured multi-storeyed buildings in the middle of the desert. Compared to vibrant Rajasthan, this monochromatic sight was curious; later, I learnt that plastering the exterior of buildings attracts more tax there.

It being October we were expecting pleasant climate, but it was mostly warm but tolerable.

Our first evening there, we went to see the light and sound show at the Pyramids. Now while we have seen images of them on television and in books, seeing them in person makes you realise just how imposing they are! We enjoyed the show and returned the next day to have a closer look.

On our second trip, we reached late having encountered a traffic jam worse than Bengaluru's infamous traffic snarls. Ay one point our driver even had to drive in reverse about a hundred meters to take another, circuitous route to escape the jam. This route provided us a glimpse of the actual city (off the tourist route) which was more or less similar to parts of any Indian city ie strewn garbage, open gutters and donkeys wandering about.

And while our journey offered many wondrous sights, all through we were told (on several occasions) the history of the polytheist Pharaohs followed by the advent of Christianity and then Islam.

Utkarsh Rai [www.twitter.com/utkarshkrai], based in Bangalore, is the managing director of an IT multinational firm, an author and a globetrotter. 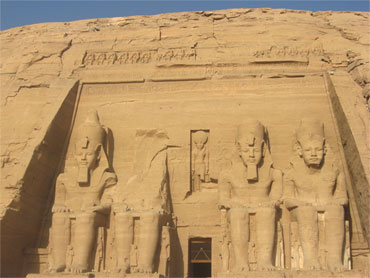 As we travelled we realised the many similarities between India and Egypt. Like India, Egypt has a long, rich history (on a few occasions I found myself correcting my guide as he started mixing up AD and BC while talking about the Romans in Egypt). Pharaoh art and fables are also similar to ancient Indian mythology -- full of nature, animals and birds.

Our next stop was King Tutankhamen's tomb (discovered in the Valley of Kings at Luxor), which is showcased at the Egyptian Museum. This museum is mammoth and provides fascinating information on a host of topics including the process of mummification and hieroglyphs (So fascinated were my kids with the hieroglyphs that we were forced to buy an Egyptian-style family nameplate).

All around are shops selling oil-based perfumes (attar), each having its own unique fragrance and some even resembling popular international fragrances. Wearing perfume is a very old tradition here and is seen in many Pharaonic paintings as well.

We then visited the high-security Khan-al-Khalili market, in Cairo. Having witnessed terrorist attacks a few times in the past, heavy security was present at every hotel with every bag being scanned.

Near the market stands the impressive Al-Hussein mosque that was built some thousand years back and named after Prophet Mohammad's grandson Husayn ibn Ali.

Amr ibn El-Aas, an Arab conqueror, brought Islam to Egypt and a mosque was built (the oldest in Egypt) at the spot where he is supposed to have camped. The Muhammad Ali mosque and Al Azhar mosque are also worth a visit. 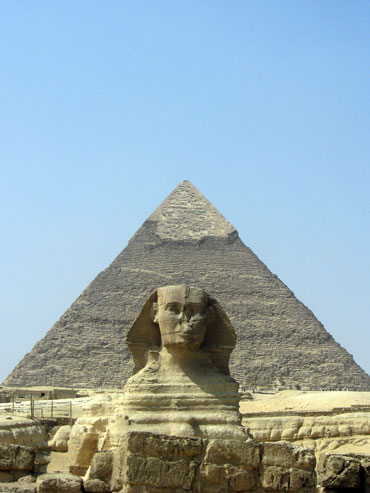 The next day we travelled to the old sector of Cairo, also known as the Coptic part of the city. Remnants of the ancient Roman wall and the Babylon Fortress, dated a few centuries BC, can be seen today. Interestingly, Babylon is just the name of the fortress and has nothing to do with the actual city of Babylon, which is in present-day Iraq.

We then visited the Hanging Church, named so because it was built above a fortress gate with its nave suspended over the passage. Onwards to the Abu Serga Church where Jesus Christ, as an infant, came to live with his parents. In the same complex, stands the Ben Ezra Synagogue, which was once a church. Coptic Christians sold it to the Jews to enable them to pay taxes to the Muslim rulers. The Jews later converted it into a synagogue.

Later that evening, we boarded for a cruise along the river Nile. The reflection of the many coloured lights together with shows on the cruise completed our day; however, the gyrations of the belly dancer were a bit too much for our young family.

Pearl of the Mediterranean 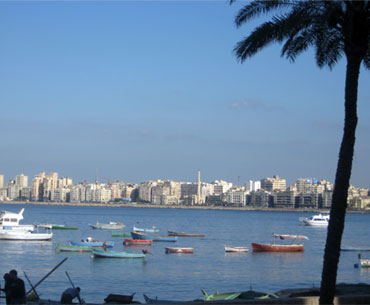 Image: Alexandria is certainly the Pearl of the Mediterranean.

We left Cairo early the following morning to beat the traffic on our visit to the Suez Canal. After a brief stopover, we proceeded to Alexandria. This is the city where the story of Cleopatra and her famous love affair with Mark Antony took place. Alexandria is certainly the Pearl of the Mediterranean -- it is beautiful and entirely different from Cairo, being more Mediterranean than Middle Eastern.

The famous lighthouse that used to be one of the ancient wonders is replaced by the Citadel of Qaitbay, an impressive building. The famous old library which was one of the largest in ancient times was destroyed by fire. A new library stands near the old one, overlooking the Mediterranean, which was inaugurated recently. It is very modern, spacious and worth a visit.

Next we went to Pompey Pillar, the name is a misnomer because for long people believed it to carry the Roman General, Pompey's, ashes, but finally, it was learnt that, it was built in honour of a Roman emperor. Near the Pillar lie the Catacombs that have underground chambers adorned with beautiful paintings and carvings. This are quite different from the ones I had seen in Rome; they were built for the burial for the ancient Egyptians and not for deceased Christians as in the case of Rome. Also the size of this catacomb is smaller than Rome's. 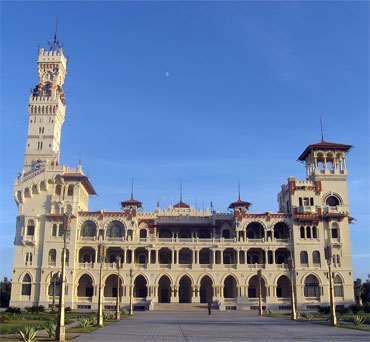 We visited the Montazah Palace next, which was built for the royal family around a hundred years ago. It has a big park, a welcome break after the hectic sightseeing earlier in the day. We spent some time there and then returned to our hotel. To our surprise we received two cakes from the hotel as it was my son's birthday; we celebrated it in the suite, overlooking the Mediterranean. Occasionally the conversation would touch upon the mystery shrouding Alexander's missing tomb and how the people in Alexandria are still optimistic about finding it here.

We took a flight from Alexandria the next day for Luxor. En route we were greeted with a view that will stay with me forever. A huge canvas with a blue stripe down the centre between green patches that in turn gave way to golden on either side in the midst of a golden desert, the blue waters of the Nile flowing through green vegetation along its banks. I wonder why they did not choose these colours for the Egyptian flag!

The city of Luxor is an open-air museum as every nook and corner is full of history. We first stopped at the Valley of Kings, the burial grounds for quite a few generations of Pharaoh. They chose this style of burial since the Pyramids were very visible and prone to be robbed. There are a number of tombs but only a few are open to visitors. Each tomb has a few chambers that are adorned with paintings and carvings. All the valuable articles that were once housed here have been shifted to different museums. 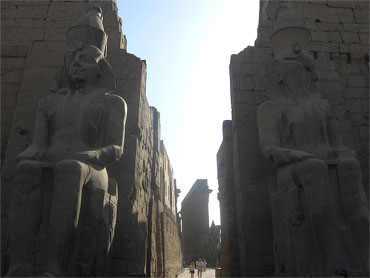 Image: The temple of Luxor

Next we stopped at the temple of Queen Hatshepsut, who is said to have dressed like a man so as to rule Egypt. Nearby, we could see the Colossi of Memnon, two huge statues, located in an open field and quite damaged.

The Temple of Karnak, around 3,500 years old and built over a period of thousand years, was our next stop and was certainly a very impressive one. The lighting arrangement and painting on pillars, columns and ceilings are amazing, but the most important is its hypostyle hall, which is famous for its architectural masterpiece. It has a sacred lake too, just like any Hindu temple.

The Temple of Luxor followed. In ancient times, festival processions used to start from Karnak and finish at Luxor. We spent half a day touring Luxor (though one can spend couple of days there) and boarded a train to Aswan the same evening.

We reached our hotel (situated on an island in the Nile) by boat. In one day, we travelled from Alexandria to Aswan and took four modes of transportation -- air, car, train and boat. Sadly we did not take the famous Nile river cruise, since the kids had to attend school.

Cruising on the Nile 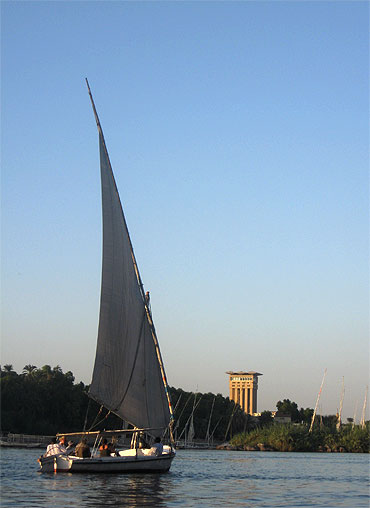 We got up very early the next morning to join the convoy of vehicles to Abu Simbel. Since this part of Egypt is not safe for road travel, tourists have to travel in a convoy under police protection. It was a unique experience to cover 280 km in around three hours driving through the desert with no traffic interruptions.

We reached Abu Simbel, bordering Sudan. Thanks to the construction of High Dam at Aswan some 40 years back and the formation of Lake Nasser in Nile, the temple was transferred to a nearby safe location.

The temples (actually there are two) are very beautiful and certainly worth the effort to reach. These were built in the thirteenth century BC. The first one was built by the Pharoah Ramesses II and the second was of his wife Nefertari, both dedicating each to different gods.

We returned to Aswan by afternoon and visited the High Dam and unfinished Obelisk. The trip was rounded off by a felucca ride on the Nile. The ride gave us time to reflect on all we had seen.

Similar to Asian culture, the joint family concept is predominant in Egypt too, where sons build a new floor to their parental house, if they could afford to. We wondered whether the economic growth would shift them to a nuclear family. It might not, as Egypt's population is smaller and there are only a few big cities which are still meeting their needs.

Back home now, we still recollect fondly our visit to the centre of one of the greatest ancient civilisations.