A peek into life at India's newest IIM 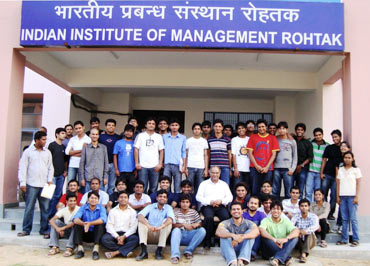 All but 70 kms stop IIM Rohtak from being called IIM Delhi. For advocates of building new IITs and IIMs near large industrialised metropolitan cities, the newest IIM at Rohtak would sound like a prayer answered in disguise, considering that it is just two hours away from the country's capital. And the travel time would be less, if the National Highway 7 -- which transports you from New Delhi right to the doorstep of IIM Rohtak's temporary campus -- were widened and made less bumpy.

You can always travel to IIM Rohtak in an air-conditioned cab, but if you are looking for a sneak preview of the local milieu that the b-school's students will spend two years in, I'd recommend a Haryana Roadways bus. The two-hour journey took me through typical Haryana scenery -- vast paddy fields interrupted the occasional factory complex. The audio system played loud animated dialogues from 70's movies spoken in the local dialect, diverting my attention away (mostly) from the several bumpy stretches on the monsoon-beaten highway.

The sprawling Maharishi Dayanand University (MDU) campus, the temporary home of IIM Rohtak, lies right at the entrance of Rohtak city and the bus dropped me barely a few hundred meters from the gate, where a large blue board pointed in the direction of the set of buildings allocated to the IIM.

Like all previous IIMs, IIM Rohtak too has its beginnings in exile. It will only be until the third or fourth batch joins the b-school that its own 200-acre permanent campus -- 20 kms away in the neighbouring village of Garnauthi -- will be ready for use.

As I entered the hostel block, the accounting term exam had just ended and the batch was enjoying a game of cricket.

"We have another exam tomorrow but we'll get down to studying only as evening approaches," said Ankush Garg, a student of the first ever batch of IIM Rohtak as he showed me around the campus. 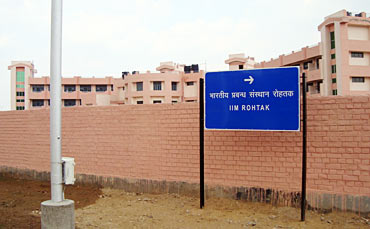 Two entire buildings of MDU have been given to IIM Rohtak. The hostel has single rooms for each student. The academic block has two classrooms, each with a capacity of 50 students and loaded with projectors and pull-down screens. The rest of the academic block is a sequence of rooms for the faculty and administration, most of which are vacant and waiting for its new occupants.

The faculty is in the process of being recruited by IIM Lucknow, the mentor institution responsible for setting up IIM Rohtak. The students have access to all of MDU's library, auditorium and sports facilities.

"We are happy with the temporary campus. We were apprehensive about what we might get, especially after we heard stories about some of the earlier IIMs being started out of single rooms of engineering colleges. But after we saw pictures of this campus posted on discussion forums, we were satisfied with the infrastructure we will get," says 23-year-old Shivank Sharma, who spent an year with Bharat Heavy Electricals Limited before joining IIM Rohtak's first batch.

The school runs completely on the back of faculty members from and curriculum formulated by IIM Lucknow, both from the main and the Noida campuses. To that extent, IIM Rohtak functions almost like a satellite campus of IIM Lucknow. But that will begin to change when the school gets its own Director (a senior professor from IIM Kozhikode has been named) on October 1 and also starts to replace the IIM Lucknow faculty by its own over the next year.

For now, faculty from IIM Lucknow and its Noida campus does to-and-fro to IIM Rohtak only for classes and occasionally stays overnight in the campus. Without a resident faculty, the academic block carries a vacant air.

The dilemma of joining a new IIM 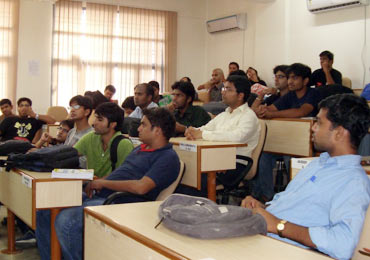 For students of the 48-strong first batch, it was the active interest taken by IIM Lucknow that made a huge difference when it came to taking a decision about whether or not to join a new IIM.

There was general skepticism doing the rounds about the success of the new IIMs. Besides, joining a new institution means that one would not have any seniors essential mentors in college life. By choice or in hindsight, the students see the absence of seniors as both a boon and a bane.

"Having no seniors means that we have to be completely on our own. It is partly a disadvantage as we have nobody we can seek help from for the assignments and projects. But on the brighter side, we don't feel suppressed as there are no existing traditions or rules that we must conform to," says Shivank.

"Soon after we joined, the faculty gave us numbers of several students from IIM Lucknow. We often call them for advice and in a way, they have been acting as seniors for us," says 25-year-old Sourabh Modi, who spent two years in the IT industry before joining IIM Rohtak.

"Apart from that, the professors including our in-charge faculty Prof NK Gupta have been very forthcoming with help. He sits at IIM Lucknow's Noida campus and we can call him anytime," he adds.

The advantage of being located near New Delhi seemed to be another factor that helped the students attain conviction about their decisions. For many, the IIM brand was reason enough to desert final admissions at schools such as MDI Gurgaon, IMT Ghaziabad and FMS Delhi and join IIM Rohtak. 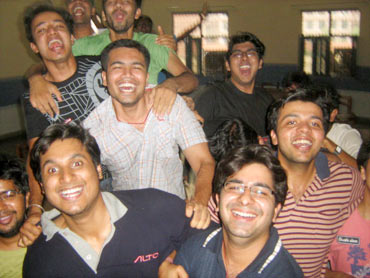 Soon after joining, the batch spent the first week getting to know each other and organising themselves. Here too, the students took inspiration and advice from IIM Lucknow students and professors.

"The student activity council was among the first ones to be formed. It's an important body that coordinates between all other committees. After that we formed the hospitality committee, the industrial relations team and the placement committee," says 22-year-old Namit Chopra, an IIT Delhi graduate who joined IIM Rohtak after securing a CAT 2009 percentile of 99.72.

The students have already started participating in festivals and competitions at other b-schools as well as organising their own intra-college events. "We organised a mock IPL-like cricket event called Run-sangram, wherein we organised ourselves into team owners and bid for players each of whom had a price," adds Namit.

The students are particularly kicked about the founding nature of their batch when it comes to forming committees and clubs. "Imagine what it will be like when I visit this campus two decades later and can have the pride to say that I founded the placement committee," says Ankush Jain, a member of the placement committee.

The first batch though meritorious in their CAT scores (average CAT percentile for the General category students is 99.6), consists almost entirely of engineers. More than three-fourths of the class has less than an year of experience while only two students have more than three years of work experience. The most experienced student brings along with him 5 years in the IT industry.

Of the 48 students, three (6 per cent) are women. In that sense, the batch is relatively less diverse. While the older IIMs have been tweaking their admission criteria to admit students from a wider spectrum, IIM Rohtak appears to have played safe by admitting its first batch purely on academic merit. 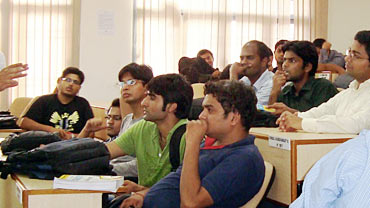 Image: In class at IIM Rohtak

The batch is yet to test the waters with its placement drive to invite companies on campus for summer placements, but the initial experience of the industrial relations committee has been promising. Much of the confidence rests on the b-school's proximity to New Delhi and Gurgaon. A road passing via the district headquarter town of Jhajjar connects IIM Rohtak directly to the Delhi airport without the need of negotiating the sluggish Delhi traffic.

"Our locational advantage got proved when we started contacting companies to invite them for talks and visits. We received positive responses within a half-hour of making the calls. Companies such as DE Shaw even started contacting us on their own, showing interest in us and wanting to know about our batch," said Shivank, who is part of the school's industrial relations cell.

"Everybody has been telling us that placing 48 students should not be very tough. Had our batch been larger then maybe there would have been a problem. Whatever be the case, our situation will never be like that of IIM Shillong where they had to organise placement interviews through video conferencing," says Ankush Jain.

An initial survey has revealed equal preferences for finance and marketing areas. However, the students admit that it might be a bit too premature to expect very prestigious profiles in finance or consulting.

Meanwhile, a placement brochure draft has been made and budgets allocated for their printing. The students plan to start reaching out to companies starting October. 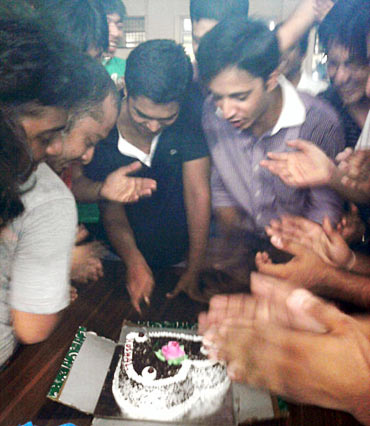 When work is over and it's time to take things easy, the batch congregates outside the hostel for a game of cricket. Socialising with other students in MDU has begun, especially with the engineering college students who often ask the IIM-ites for advice on cracking the CAT.

Fun traditions and rituals have started taking shape, birthday celebrations being one such. "We celebrate each birthday with lots of cakes. There are just lots of cakes and they are rarely eaten," Ankush Jain quips.

"Among the main things that worried us before joining was the kind of place that Rohtak is and whether we would have a life here," says Ankush Garg. By now, the batch has found its patent hang-outs and eat-outs around the campus.

A common complaint though, is the lack of good cinema halls in Rohtak. "For example, we had to travel all the way to New Delhi to watch Inception because it wasn't playing anywhere here," says a student.

As twilight sets in, I bid goodbye to IIM Rohtak and catch a shared cab back to New Delhi. It turns out that the cab is carrying a local Haryana politician and his family too, so the conversations soon turn to the Commonwealth Games mess and political gossip is passed around like a bag of french fries.

My impressions of IIM Rohtak -- it being the first batch, I found a rather cool bunch who spoke about their situation candidly and without reservations. I also found the campus to be sufficiently functional for a temporary campus. I have observed several reputed 2nd-tier b-schools function with much less. The school is located conveniently near the biggest city of India (in my experience, it took me only a little more time to reach IIM Rohtak from Connaught Place by road compared to that from the Kolkata airport to IIM Calcutta not very long ago), and if it plays its cards well, it can turn Delhi or Gurgaon companies going to off-the-mainstream-city IIMs to itself.

On the flipside, that the school is not teeming with elderly people (read permanent faculty) gives the campus a rather incomplete feel. Considering how the older IIMs are themselves facing difficulty in filling up their vacant faculty positions, populating the faculty rooms of IIM Rohtak will be a challenge.

In order to fully harness its locational advantage for placements, and in order to compete with the newer IIMs, it will have to also increase batch diversity, which other IIMs have begun to boast of lately. But teaching a diverse and more experienced batch requires able faculty, both by numbers, quality and dedication. Much depends on how fast IIM Rohtak can manage faculty hiring and keep up the hiring with increasing batch sizes in the coming years.