Karan Singh Grover's charming looks is a big hit with the girls. The actor who plays Dr Armaan Mallik (intern) in Dilli Mill Gayye made his television debut in the popular MTV show Kitni Mast Hai Zindagi. He followed this up with Solaah Singaar and also essayed a negative role in Kasuati Zindagi Kay. He is currently anchoring a reality show Zara Nachke Dikha on Star One. He tells Rajul Hegde more. Excerpts:

Tell us about your background.

I came to Mumbai in 2000 to do a hotel management course. Following this, I worked as a marketing executive with Hotel Sheraton in Muscat for a year. It was in 2004 that I participated in the Gladrags Mr India contest and bagged the most popular model award. After that I did few ramp shows and ads. Then I was selected to for Balaji Telefilms' show Kitni Mast Hai Zindagi on MTV.

I am just like Dr Armaan -- fun loving, flirtatious, and tension free. I am serious about my work but apart from that I am always playing pranks on people. As a viewer I relate more to Dil Mill Gayye.

What is that one thing about Dr Armaan that appeals to you the most?

That he is well educated and a doctor whereas I just hold a degree in hotel management.

How does it feel to be a part of a number one and a hugely popular show?

It is a nice feeling that the show is popular among the younger generation. It has enough spice and fun. People can relate to it as it is not too dramatic.

Recently Shilpa Anand (Dr Riddhima) quit the show. Did it affect the TRP ratings since you both shared a very good chemistry onscreen?

I try to keep away from the TRP game. My whole team and I are really missing her because it was a team effort that made this show popular. We are like a family. 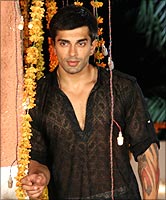 Tell us about Sukriti Khandpal (the new Dr Riddhima)?

It will take time for viewers to get used to any new character. Now they have accepted her. Sukriti is doing a good job.

What are your other interests?

I love to sing. I also had a band during my college days in Saudi Arabia called Thousand Decibels. If not an actor, I would have become a singer. I am very passionate about work. I am a fitness freak I go to gym before going my shoot. I also do yoga.

You have admitted that you are flirtatious? Does your girlfriend Shraddha Nigam mind when you flirt?

I am flirtatious by nature but I have never hurt anyone. She knows that I am a one-woman man.

How do you mange to spend time with her despite hectic schedules?

We meet for dinner and sometimes go for a long drive.

Which is your favourite show on television? 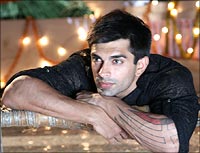 Frankly speaking, I don't get time to watch even my shows. I work 14 hours a day. I love to comedy shows whenever I have the time.

Ours sources say that you have been offered Nach Baliye?

Even I heard this from someone. But I haven't got any such offer. I would defiantly love to do it. Nach Baliye will be shot after Zara Nachke Dikha (which he is hosting) so there is still time.

This is the first time you are anchoring a show? What is the kind of preparation you are doing?

I am really very excited to host the show. I want to be myself and not bound by the script. Audience will see me sans a doctor's coat. I will definitely take tips from my close friends in the industry. I always believe in showing the audience the real Karan and will not imitate anyone.

Yes but nothing is finalised. I don't plan things. I am open to everything that comes my way.