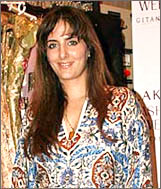 Catching up with friends, 'poking', 'pinging', uploading pics, letting the world know what state of mind you're in from day to day -- there's no doubt that we're the social networking generation.

If you don't have at least one account on Facebook, Twitter, MySpace, LinkedIn or any other social networking website, you're as good as an Internet recluse, right? Who would want to cut themselves off from all the Web has to offer?

Maybe someone who's had a bad experience with social networking? Someone whose account has been hacked, friends have been duped, bank accounts have been compromised?

Yes, it's been known to happen.

And nine months ago, it happened to celebrated Indian designer Pria Kataaria Puri. She is still suffering the repercussions. Here, she recounts her harrowing experience:

What happened to me in January this year was absolutely devastating. My Hotmail account, an email account I've used for 10 years, was hacked into. And through it, the hackers gained entry to my social networking account on Facebook. The motive was more than just getting a kick out of violating my privacy, it was financial -- they sent a common message to all my contacts impersonating me. The message said that I was lost in London, with my passport and everything gone and I desperately needed money to be wired to me by Western Union. Can you imagine something like this reaching not only my friends, but all the people I network with for business?

At the time, I was shopping in London, completely unaware of what was taking place. I got to know after a few friends started calling and messaging me on my cellphone, asking if I was alright, what happened, where they should wire me money, etc. I was like, "Wire me what money?" And that is how I found out what had transpired. To say that I was horrified is an understatement.

You see, in addition to all my contacts, there was another very serious concern at hand. I am an NRI and a fashion designer. All my banking details, from balances to passwords were in my online account, because I have money in seven different banks and it's easier for me to keep track of everything through there. Moreover, my work -- fashion prints, fashion research, buyer contacts -- all of that was in my account too.

My settings were not made public online. But because I'm a known face, I was put at risk. In fact, when I signed on for a Facebook account, there were already several accounts under my name on the network, with my collections' pictures loaded and everything. But then being in touch with people online is not for my personal use so much as for my business -- it's important for my work.

I was targetted because I am a celebrity -- my designs sell in stores all over the world, I have wealthy contacts from overseas, people who are associated with me. The hacking business operates like a vicious cycle. The hackers use my account to gain personal information of my contacts and then try and hack into my contacts' accounts. In the meantime, they also tried to make a fast buck through it. If people had responded only through Facebook or Hotmail, they could have responded impersonating me again and duping my well-intentioned friends of their money.

Here's how my account was hacked into. I received a very legitimate-looking mail from the Hotmail organisation itself, asking me to verify my account within 24 hours as they were in the process of de-activating email addresses that were not in use over a long period of time. Of course, the email was not from Hotmail and my account was in frequent use, but with so much at stake and not suspecting anything given the official look of the mail, I complied. And my details fell into the hackers' hands. They changed my password and I could access neither my inbox nor Facebook.

I had to change all my banking details, contact as many people as I could and tell them it was a hoax. When I complained to Facebook, they closed my account within 24 hours, but it's been nine months now and Hotmail has yet to respond. I know Sabeer Bhatia personally -- although, of course, he has nothing to do with the company anymore -- and I tried everything possible to get them to help me. I emailed them several times, I even contacted their office directly in Palo Alto, San Francisco, where my brother is settled, to no avail. They are just not interested in helping out their customers. To top everything, I had a corporate account with them -- I paid a yearly fees for additional email space too. And the account, despite being hacked, is still operational -- can you believe that?

What's more, this is not the first time someone has tried to play nasty with my name. A short while before this happened, a company in London was masquerading as my office, inviting models to submit their portfolios for a chance to walk the ramp for my shows. They ran the scam there, as in India I am too well known for something like this to go undetected. The man who was getting in touch with the models was even using an email ID with my name following his. Luckily, one model used my personal email account from my own website and contacted me directly, asking if I was running this business. I was able to trace these impersonators online and had Web security deal with them. But the hacking experience was far, far worse.

I cannot tell you the risk my personal and business life was put to as a result of what happened. I had business associates, buyers, friends, everyone listed on Hotmail and Facebook, over a thousand people. So many of them are still not aware that my Hotmail account is not the one I use anymore, but because it continues to operate, there is no way of letting them know.

I still run a Facebook account, but here is my advice to everyone who is into social networking or even owns an email account -- don't save any personal information of any kind online. No bank details, no passwords, no work assignments, nothing. I now use a USB port with all my information on it and another USB as backup to the one in use -- one virus is all it takes for everything to disappear. In fact, I just got back from the United States where a deadly virus is making its way into people's computer systems. CNN reported that emails marked from Hallmark Cards carry it and once opened, it can clear all the data you have stored on a machine. Also, I delete all the important information I have online and if I need to put anything business-oriented in an email, I use a coded format.

Do you have a similar story to tell of being duped online through a social networking account? Has someone hacked into your profile, sent friends misleading mesages or stalked you using information you've made available online? Share your experiences and advice with us -- email us at getahead@rediff.co.in (subject line: 'My Social Networking Nightmare') and we'll publish the most interesting accounts right here on rediff.com

Is social networking posing a risk to you?

Too much social networking linked to depression