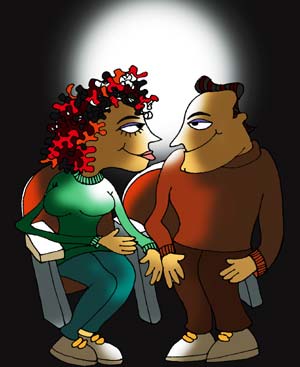 The 'seven-year itch' has become a thing of the past as many young couples find their relationship growing tiresome and even boring as early as three years into their marriage. So how do they cope when the initial sheen has worn off and intimacy takes a backseat to family and work pressures?

Last week we featured an excerpt from The Fifty-50 Marriage: A return to intimacy, a book that attempts to assist young couples re-connect. Here, in an e-mail interview with rediff.com Dr Vijay Nagaswami, couples counsellor and author of the the book, discusses the problems young couples face a few years into their marriage and shares advice on how spouses can make the transition from romance to intimacy.

Tell us a bit about your book 'The Fifty-50 Marriage'. What prompted you to write the book?
It was conceived as part of a series of books on marriage (Westland Books' 'New Indian Marriage series'), where I initially addressed the issues faced by recently or soon-to-be married couples in the first book, The 24x7 Marriage. The next group of married couples whose needs were pressing enough to be responded to was the ones who'd been married a few years and found themselves drifting away from each other and wondering whether to part ways or stay together. When they no longer felt as close to each other as they used to. This book is intended for them, to help them return to intimacy.

In your 25 years of couples counselling, what have you seen as the most common stumbling blocks young couples encounter? And what are the tools they need to overcome them?
Probably the most difficult thing for couples to do in our country is to jointly accept complete ownership of their marriage and get other people (parents, family members, children, co-workers, bosses, friends) out of the marriage space. In other words, for them to recognise that marriage is between two individuals and not between two families. All they need to achieve this is an abiding belief that the more you invest in the marriage, the better will all your relationships be. Sometimes, talking to counsellors can also help towards this.

Over the years, the traditional Indian marriage has evolved with women becoming more independent, the preference for nuclear families increasing etc. One would assume that the problems associated with marriage have also changed. Would you agree?
Oh certainly! The economic, social and sexual empowerment of women have together changed the dynamics of marriage substantially. The issues faced by couples today are issues that their parents would never have considered 'issues'. However, the fact that power structures in urban marriages are less lopsided than before, though not completely balanced (we still live in a patriarchal environment), means that couples have to deal with new sets of problems.

So what would you say are the 'new' problems that couples face or should be prepared to face?
The new problems that today's couples face have more to do with 'being in the marriage' than playing 'roles in the marriage'. When two people learn to relate to each other as human beings rather than as 'husband' or 'wife', there are new areas of their own psyches that they have to explore. This can be exciting provided couples configure their marriages appropriately.

The good news is that many couples are doing so and as a result are able to work through the three essential problems faced by most newly married Indian couples: 'Me and My Family Vs You and Your Family', control games, and sexual differences.

Do you find that more couples today are open to couples counselling? Is there a stigma attached to seeking professional help to fix a troubled marriage?
Not as much as before, but the stigma's still there. But by and large, couples are much more open to the idea of talking to a counsellor than before. However, men still find it harder to take help than do women (this is a global phenomenon, not just confined to Indian men).

Is there a particular stage or particular life situations in a marriage that is more prone to emotional ennui?
Several decades ago, one spoke of the 'seven-year itch'. Now it's more like three years on an average, when partners start tiring of each other. This happens to most marriages, but the successful ones are where the partners realise this and increase their emotional investment in the marriage at appropriate times and in appropriate quantities.

Typically, the situations where one needs to be careful are: spending too much time at work can facilitate workplace intimacies; not enough of a 'we' space in the marriage means lack of connectedness; long-distance marriages require special efforts at nurturing; having a child too early can put pressure on the marriage; over-socialisation increases the risk of 'friendship intimacies'.

What are some of the reasons for spouses drifting away from each other emotionally?
These, by and large, relate to not creating a substantial enough 'we' space or 'marriage space'. If both partners don't allow themselves to develop the three Cs: commitment, connectedness and companionship, they are certainly going to drift away from each other and look for these elsewhere.

Both are desirable in a marriage, but not together. Romantic love starts off a marriage and lasts from a few months to a few years. Intimate love stays with you for the rest of the marriage.

You also talk about sex and sexuality in your book. In your experience, what are the most common 'problems' or issues couples face when it comes to sex or starting a sexual relationship?
It's basically sexual anxieties and fears. Since we're still not subject to adequate sex education, most middle-class Indians tend to obtain inadequate sexual knowledge and there are usually a lot of hits and misses (more misses than hits) in the early days of sexual activity. Typically premature ejaculation for men and dyspareunia (painful intercourse) for women remain the top problems.

You mention 'toxic marriages' where you speak of the violent marriage, the suspicious marriage and others. Are there certain warning signs that young people need to watch out for as they embark on a relationship?There are no clear-cut warning signals of toxicity. However, if couples find that they fight more and talk less or enjoy other peoples' company more than they do each others', then a problem is waiting to happen and the marriage needs some preventive maintenance.

You speak of 'debugging a marriage'. Tell us a bit about the concept and what it entails for both partners.
It basically refers to getting the toxicity out of the marriage. This can be done by:

As the 'arranged marriage vs love marriage' debate continues, do you see similar problems that couples face no matter how their relationship or marriage begins?
However they choose their partners, the issues faced by Indian couples are essentially similar. Today in arranged marriages too, the couple participates more strongly than before in partner choice, so the ownership of their choice is much higher than before. As a result they can't blame their parents any more.

Sex often takes a backseat a few years into a marriage, once the relationship has lost its initial fervour, or once kids come into the picture or even as work pressures mount. What advice would you give couples who seem to have lost that spark?
They must try and make sure that they connect to each other, emotionally and sexually on a regular basis. And to try using sexual variations to make their sex lives more interesting. Also, staying in shape to feel and be desirable helps tremendously.

All couples fight, and some would say it is a healthy release. But are there rules to having 'healthy' fights?
Oh yes there are. Read the book and you'll know how your fights can be reformatted to facilitate closeness rather than distance.

The break-up guide: How to cope with losing love

Is breaking up with a friend harder?