News
Business
Movies
Sports
Cricket
Get Ahead
Money Tips
Shopping
Sign in  |  Create a Rediffmail account
Rediff.com  » Getahead » Why some lose weight easily and others don't

Why some lose weight easily and others don't 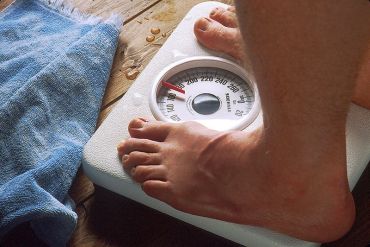 Have you ever wondered why a friend of yours is in good shape and you are not, even though both of you follow the same diet and exercise rules? Well, you may find your answer in the findings of newly-conducted research.

Using MRI and magnetic resonance (MR) spectroscopy, German researchers have found out why some people lose weight and body fat when they exercise and eat less, while others don't.

The study can now help predict who will benefit from lifestyle changes.

"You may have two individuals who weigh the same and have the same body mass index (BMI), but have very different levels of internal fat," said lead researcher and physicist Jurgen Machann, Dipl Phys, from University Hospital Tubingen in Tubingen, Germany.

"Abdominal and liver fat are the two most important factors in predicting whether a lifestyle intervention will be successful," he added.

The researchers performed MRI and MR spectroscopy on 243 individuals prior to and nine months after a lifestyle intervention.

The intervention called for a weight loss of 5 percent, reducing fat intake to a maximum of 30 percent of total calories (including less than 10 percent in the form of saturated fat) and engaging in moderate physical activity such as walking at least three hours a week.

Each of the participants, which included 144 females (mean age 44.5 years) and 99 males (mean age 47.3), was considered at risk of developing type 2 diabetes as a result of obesity, measured by a body mass index (BMI) of 27 or greater or having an impaired glucose tolerance or a first-degree relative with the disease.

"Common methods, such as body impedance analysis, may determine that a body consists of 25 percent fat, but that does not tell you how the fat is distributed. BMI is a good measure for obesity but not necessarily a predictor for health risk, because not only the amount of fat, but also its distribution are essential. Only by looking inside the body can you establish the amount of visceral (abdominal) and liver fat," said Machann.

MRI allowed researchers to differentiate fatty tissue from lean tissue throughout the body. MR spectroscopy generated additional data on the fat content of individual organs, such as the liver.

Researchers used improved insulin sensitivity to measure the success of the lifestyle intervention.

Individuals with type 2 diabetes do not respond correctly to insulin, a hormone secreted by the pancreas that aids in metabolism. In pre-diabetes, cells become resistant to the action of insulin.

"The participants who improved their health status as a result of diet and exercise started out with lower baseline levels of abdominal and liver fat," Machann said. "In our study, these two factors predetermined whether or not a lifestyle intervention would be successful for a particular individual."

Individuals who did not improve insulin sensitivity as a result of lifestyle changes lost much smaller amounts of visceral fat (a mean reduction of 4 percent for women and 6 percent for men).

The men also lost less liver fat (a mean of 15 percent), and women gained a mean of 22 percent in liver fat.

"Our results demonstrate that with MRI and MR spectroscopy, we can determine who will benefit from dietary changes and exercise and who will need other interventions," said Machann.

Results of the study are published online and will appear in the November issue of the journal Radiology.

11 ways to exercise while watching TV