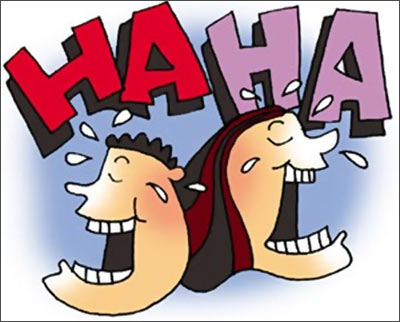 Unlucky in love? Well, try to perk up your sense of humour, for a new study has found that ladies adore men who make them laugh.

According to the research, women think that funny men are smarter and more likely to be honest than more dour counterparts.

The researchers think that the findings could be the reason why so many lonely heart ads placed by women list GSOH (good sense of humour) as a prerequisite for a partner.

Boffins believe ladies have evolved to find intelligence an attractive quality because it suggests that a man will be a good provider for her and her children.

The study included 45 heterosexual women who were asked to read shorts descriptions of themselves compiled by 20 men, 10 of which were scored extremely funny and 10 as only slightly funny.

Then women were asked how intelligent and honest they thought that the men were and how likely they would be to go on to develop a friendship or a long-term relationship with them.

The findings show that men who used the funniest descriptions of themselves were thought to be significantly more intelligent than those who weren't as witty.

The women in the study also judged the men who had a good sense of humour as more honest and said that they would be more likely to become friends with them.

Funnier men were also seen as a better catch for a long-term relationship, according to the findings.

Kristofor McCarty, from Northumbria University, who led the study, said: "A quick browse of lonely-hearts ads will confirm that women look for a good sense of humour in a potential partner -- our research may explain why this is the case."

"The findings provide evidence that women use humour as an indication of a guy's intelligence."

"Intelligence is a very attractive quality as a clever man should be more able to provide resources for his offspring."

"But guys be warned: not just any gag will do. We discovered that the humour must be genuinely funny for the man to be judged as more intelligent."

The study will be presented at British Psychological Society Annual Conference in Brighton.