Get your travel etiquette right 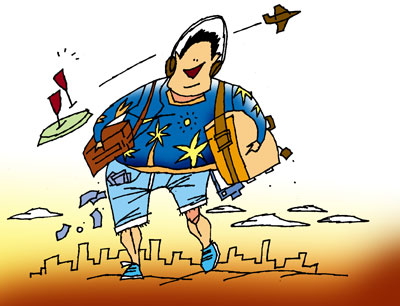 While some local customs and laws might at times seem absurd to the foreign traveller, understanding other cultures in terms of what is acceptable behaviour and what might be illegal or taboo is of great importance when travelling.

According to Expedia.co.in operated by Expedia, Inc., knowing the local rules and customs of a travel destination will not only help you stay out of trouble when travelling, and avoid potential embarrassment or offence, but it can also open doors to unique and rewarding travel experiences.

With destinations across the Far East, Middle East, Europe, Middle East and Africa becoming more popular with Indian travellers -- and with customs and laws in these countries often being considerably different from those in India -- being aware of local practices and mores is increasingly important.

Arthur Hoffman, Managing Director, Expedia Asia Pacific, says: "While Indian travellers are generally respectful of the cultures and laws of the countries they travel to, be mindful that what may be polite and normal in one culture may shock and offend another. Therefore, it is important to be knowledgeable and savvy about the local laws and cultural practices of the location one is travelling to."

Hoffman also advises that, when travelling abroad, Indians should also be aware that local laws and penalties, including ones that appear severe by Indian standards, do apply to foreigners. For instance, in some countries, penalties for drug offences and homosexual acts may incur lengthy prison sentences, corporal punishment or even carry the death penalty. He pointed out that it was important to bear in mind that Sharia (Islamic) law is still heavily enforced in some Islamic countries, while taking photographs of local people, particularly women and children, is also illegal in some countries.

"Remember the proverb: 'Forewarned is fore-armed'. Travellers should take time to research the destinations they are travelling to, consult traveller review sites such as TripAdvisor for helpful tips on how to behave, and be particularly mindful of advice relating to local customs. At the very least, it will prevent you from causing offence to the locals and bringing embarrassment on yourself; at the most, it could save you from a very unpleasant brush with the law," Hoffman concluded.

Here some of the more intriguing local customs to be mindful of: