Marital discord and resentment: An excerpt from Faking It

Though IIT Kanpur and UC Berkeley graduate Amrita Chowdhury earned seven US patents during her stint as a Silicon Valley-based engineer, she's not your typical 'left brain' person.

That's because, in addition to a fiercely analytical mind, she's also blessed with a creative side, which explains her fascination with the world of contemporary Indian Art. Now, this creative streak has gone a step further, and given us her debut novel, Faking It.

The book tells the tale of Tara Malhotra, a finance expert, loving wife and mother and budding Indian Art enthusiast. She's living her dream in Washington DC, when one day her happy world is turned upside down, as her investment banker husband's job promotion dictates a shift to Mumbai; and soon Tara unwillingly joins the ranks of Newly Returned Indians, and hates every minute of it.

Annoyed with the city's traffic problems and housing shortages, disgusted by its filth and squalour and disenchanted its high society, Tara begins indulging her taste for contemporary Indian art. So much so, in fact, that she and a friend decide to open an art gallery in South Mumbai.

Marital problems with her husband Raj only exacerbate her loneliness, to the point that she becomes enamoured with a jetsetting art dealer named Roy Jordan, who's recently unearthed a long-forgotten painting worth crores.

Presented below is an excerpt from Part 1, Chapter 7 of Faking It:

The next morning Roy was all over the morning papers. Even the Business Times talked about rising art prices and the recent Sher-Gil discovery. The pulp-happy writers of page three, of course, went on overdrive about Roy, about his Anglo links to India, the event from last night and the newly discovered Amrita Sher-Gil.

And there, under the article, was half a picture of me, with Roy whispering in my ear! Wow. I read on avidly, sipping my morning tea.

Pressmen speculated about the connections between Amrita and the zamindar from Tanda. The story talked about the rift between Amrita's parents and Victor Egan -- her Hungarian doctor-husband and cousin; about how the young couple had escaped to an ancestral property belonging to Amrita's paternal relatives in a non-descript village called Saraya. The unemployed Victor had begun helping out at the local dispensary. Apparently, the young zamindar had befriended Victor over a tiger hunt and later helped him financially. After Amrita's death, when Victor had set up his practice in Saraya and Gorakhpur, he had continued with this friendship. The painting could have been given to the zamindar as a gift in lieu of the help.

There was even a quote from Roy, saying: 'this is a significant find; it also opens the possibility that there may be other works by Amrita Sher-Gil, lying around, undiscovered.'

On Sunday evening Raj arrived back from Brussels, laden with gifts that delighted our child but did little to appease me. Raj was excited about the bond market shifts, which were making investors friendlier to risky emerging market equity. I listened disinterestedly, refusing to share his excitement.

Of course, folks overseas were getting more excited about India than they had been in twenty decades. For sure, the China-refrain in business circles was expanding to India-China. But it was all more hype than reality. All created by the Indian media. Raj had been absolutely brainwashed by the Business Times. I couldn't remember there ever being this much furore about India Shining in The Wall Street Journal before.

'Anyway,' Raj continued. 'People kept asking me about current FDI in India and market movements over the past year and projections.' He was at the dresser, putting away his cufflinks in the box with the rest of his collection. 'I tell you, it is a hot area --' he paused -- 'Who's this?'

I looked up to see Raj frowning at the newspaper photograph I had cut from the paper -- Roy bending into my ear; my hands resting on his arm, part of my face cut off -- I knew it looked a tad cosy. Nothing to it, of course. 'Roy Jordan,' I shrugged casually. 'You met him at the Legends of India art show, remember?'

Raj drew a blank. 'I don't remember,' he huffed with instant animosity as he placed the box inside the dresser and slammed the drawer shut. 'You didn't tell me'

I cut him short. 'You don't need to know about everything I do. What you do need to know is I've found the apartment I want.'

Excerpted from Faking It (Rs 250) by Amrita Chowdhury with the permission of publishers Hachette India.

Lockdown tips: Challenge your kids to this game!

At the time of coronavirus, the art of doing nothing

How a song taught kids to wash their hands!

Can you solve this travel puzzle? 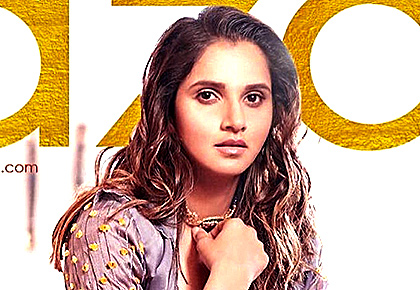 Sania Mirza stole our hearts with her minimal look

Justice on a deathbed: Excerpt from Love's Fury