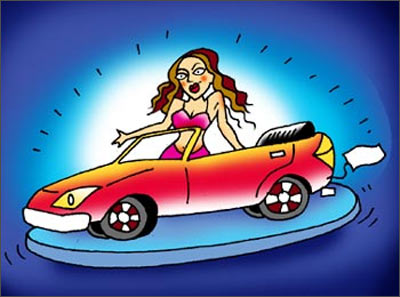 While a recent study concluded that men prefer dating beautiful bimbos, new research has confirmed what many males and advertisers long believed: driving a flashy car really does make a person more attractive to women.

Psychologists at the University of Wales presented women with separate images of the same man sitting in a silver Bentley Continental, then a red Ford Fiesta. The study involved 120 participants, reports The Scotsman.

After seeing the male, the volunteers viewed him as 'more attractive' in the prestige car. However, when men were shown images of a woman of comparable attractiveness sitting in the same cars, she was judged to be equally alluring.

Dr Michael Dunn, who led the research, which has been published in British Journal of Psychology, said: "In the past, women were very restricted economically and tied to men for financial security but in recent years, through female emancipation, they have become independently wealthy with access to their own financial security."

"But what you find is that there is still a preference for wealthy males, which suggests that these preferences are evolutionary, rather than social factors." According to him, men were hard-wired to view women in terms of purely reproductive attractiveness, regardless of the outer signs of their wealth or status.

Donna Dawson, a psychologist specialising in personality, behaviour and relationships, said: "This doesn't surprise me at all. It's hard to fight against our genetic inheritance. I think women have always looked to men for some sort of financial security and the car is proof of that."